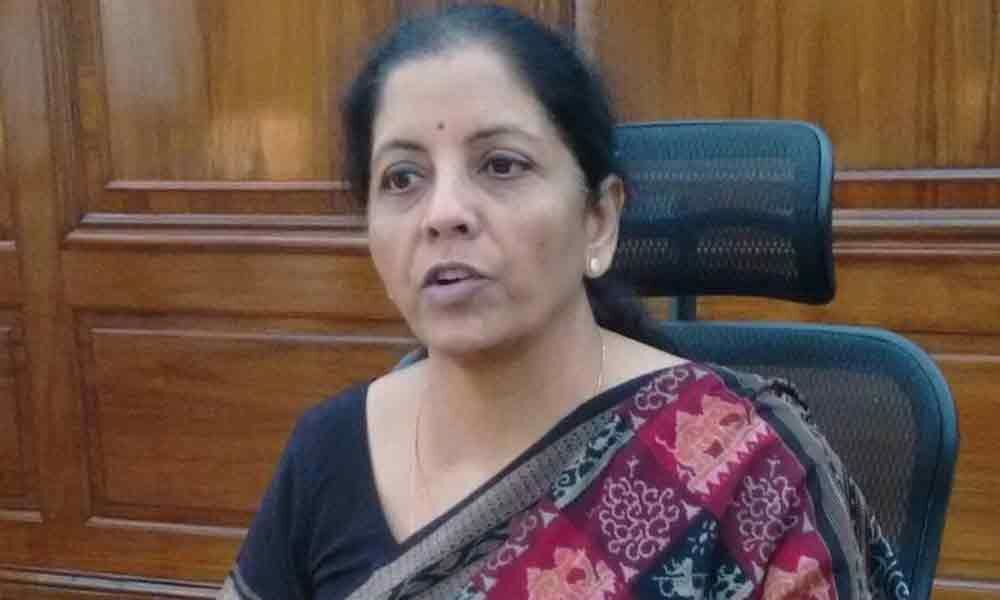 There is a law under FRBM where we have committed ourselves for the gliding path for the adherence to achieving 3 per cent (fiscal deficit) limit set on me. Till such time the law exists, I have to comply, says the Finance Minister

New Delhi: Assuring that all the numbers mentioned in the Budget are realistic and achievable, Finance Minister Nirmala Sitharaman said as a government minister she is duty bound to follow glide path to achieve fiscal deficit target of 3 per cent as per the law.

In the Budget presented on Friday, the government lowered the fiscal deficit target to 3.3 per cent of the GDP for 2019-20 as compared to 3.4 per cent projected in the interim Budget in February.

"I am a government Minister. There is a law under FRBM where we have committed ourselves for the gliding path for the adherence to achieving 3 per cent (fiscal deficit) limit set on me. Till such time the law exists, I have to comply," Sitharaman said.

The Centre has committed to reduce the fiscal deficit -- the gap between total expenditure and revenue -- to 3 per cent of the gross domestic product (GDP) by 2020-21 and eliminate the primary deficit as per the Fiscal Responsibility and Budget Management (FRBM) Act.

Primary deficit refers to the deficit left after subtracting interest payments from the fiscal deficit. On the narrative of fiscal relaxation to boost growth, she said, "I would happily join the debate either this way or that way to say should we for a country like India have obsession with 3 per cent (fiscal deficit).

Even now it is a debate. It has not come to the extent of changing FRBM law and permitting fiscal relaxation yet."

She further said that all the figures mentioned in the Budget are realistic and reasonable. "People feel that targets set for us are reasonable and achievable.

There is no exaggeration in any of the targets inclusive of disinvestment. It is only Rs 25,000 crore more than what it was earlier," she said in her interaction with media a day after the Budget was presented in Parliament.

On criticism that the Budget has too little to propel consumption, the finance minister said, "We have not ignored consumption. We did not ignore consumption even in the last term. I am reiterating that public expenditure would be focused through infrastructure development."

Public spending on infrastructure is one of the most effective ways money can reach the hands of the people and that will trigger consumption, she added.

She also said that the Budget has attempted to push consumption by taking the much-needed step to tackle the crisis in non-banking financial companies (NBFC) sector.

In a bid to address the stress in NBFC sector, the government proposed that public sector banks would purchase high-rated pooled assets of financially sound NBFCs, amounting to a total of Rs 1 lakh crore during the current financial year.

For this, the government will provide one-time six months' partial credit guarantee to PSBs for first loss of up to 10 per cent. The government also proposed to allow NBFCs raise funds in public issues and do away with the requirement for creating a debenture redemption reserve (DRR), which is currently applicable for only public issues as private placements are exempt.

As of now, NBFCs that do public placement of debt have to maintain a DRR and in addition, a special reserve as required by the RBI also has to be maintained.

In a bid to improve regulatory oversight, the government also proposed to bring housing finance companies under RBI from the fold of National Housing Bank.