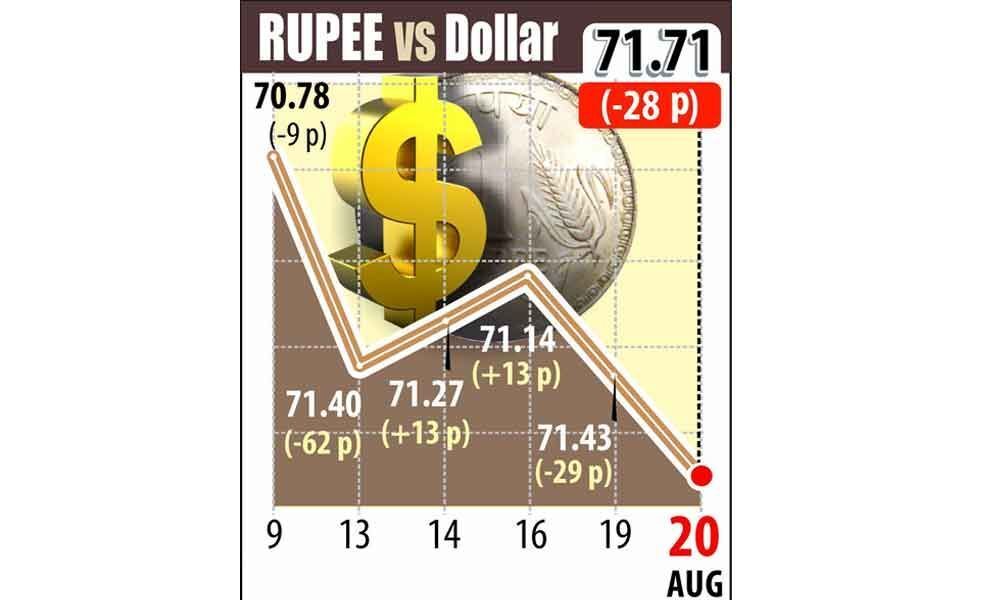 Mumbai: The Indian rupee on Tuesday furthered its loss by another 28 paise to close at a new six-month low of 71.71 against the US dollar as economic uncertainties continued to weigh.

Investors remained risk averse considering a host of factors including fast-spreading economic slowdown, outlook on foreign fund outflows and weakness in most emerging market currencies, according to forex traders.

However, there are expectations that the government will soon come out with stimulus measures to arrest slowdown in consumer demand in various sectors. Meanwhile, higher crude oil prices also had its impact on rupee's trading pattern.

This is the lowest level for the local unit since February 4, when it closed at 71.80 a $. On Monday, the Indian rupee had settled at 71.43 against the US dollar.

Meanwhile, the dollar index -- which gauges the greenback's strength against a basket of six currencies -- rose 0.06 per cent to 98.40. The 10-year Indian government bond yield was steady at 6.58 per cent on Tuesday.

"Indian rupee declines for a second day as importers and foreign banks rush for the dollar amid recovery in crude oil prices.

The dollar Index hovered near a three-week high as expectations of fresh stimulus drove an improvement appetite for riskier assets and lifted US government bond yields, he said, adding that the next support for the rupee is seen at 72.5 odd levels.