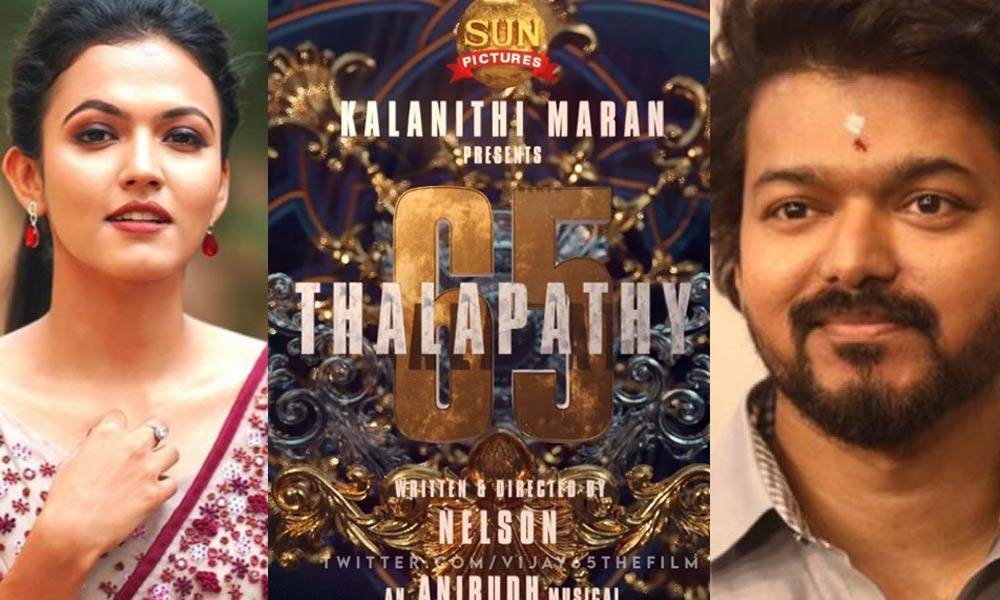 The launch muhurat ceremony of famous Kollywood star Vijay's 65th movie was conducted in a grand scale. The whole team working in the project was present on this occasion except the lead actress Pooja Hegde.

The actress, however, expressed her disappointment on social media as she could not attend the function which would have marked her first ever presence with Vijay.

Another interesting news about this movie is that we are going to see one more lead actress in this movie. She is none other than Malayalam beauty Aparna Das. This was disclosed by Aparna Das herself on her social media handle. But unfortunately, even Aparna was absent during the function. Aparna Das shared about this on her twitter.

"I am happy to be a part of "Dalapathi 65". My dream of sharing screen space with Vijay has been realised. My thanks to director Nelson Dilip," thus tweeted Aparna.

Aparna Das entered the tinsel world through her tiktok performances. The actress entered film world through her appearance in Malayalam movies, and now is all set to work in a big budget movie with Vijay. Aparna is excited about this unique opportunity.

The team of "Vijay 65" which has completed its Muhurat will commence shooting after the completion of Tamil Nadu elections. There is also a buzz about the commencement of the shooting in the month of May. The movie will be helmed by Nelson Dilip and will be produced under the banner Sun Pictures. We hear that ths movie will be an out and out commercial entertainer.

Meanwhile, as we told you earlier, Pooja Hegde tweeted about her inability to attend the inaugural ceremony of the movie. "I am unable to attend the ceremony owing to my busy shooting schedule. My heart is with the production team and will soon join the team," thus has tweeted Pooja Hegde. This movie is temporarily titled "Vijay 65" which will be renamed later. The team has planned to shoot some important portions of this movie in Russia and the movie is likely to release during Pongal next year.

Vijay is basking in the super success of his latest movie Master starring Vijay Sethupathi and Malavika Mohanan. The film was bankrolled by XB Creators and directed by Lokesh Kanagaraj who was recently diagnosed with COVID.