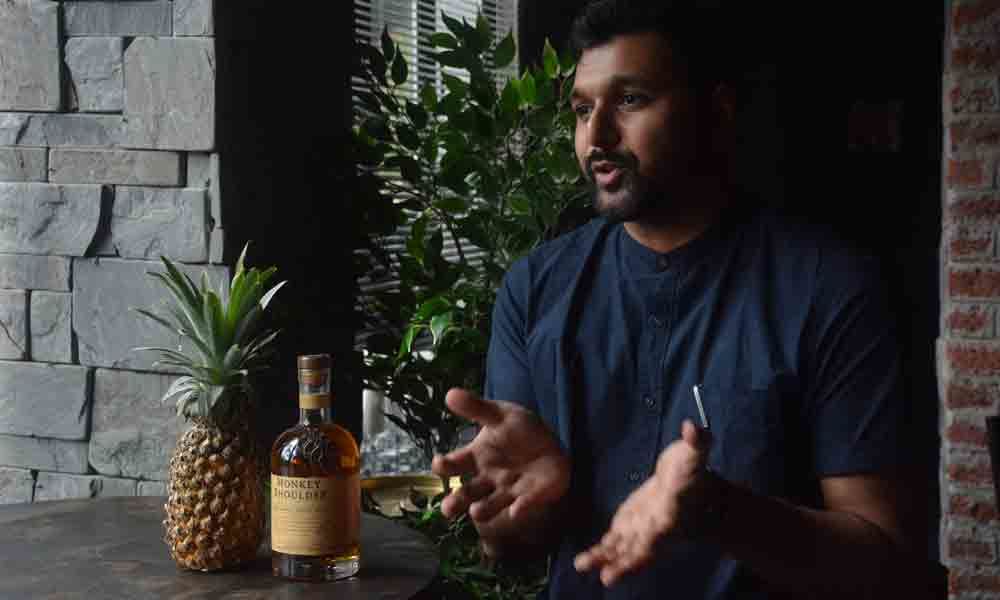 It was morning time, that part of the day when the breweries and lounges wear a deserted look, but it was not the case at Zero 40 Brewing in

It was morning time, that part of the day when the breweries and lounges wear a deserted look, but it was not the case at Zero 40 Brewing in Hyderabad. There was a flurry of activity with the multilevel brewery, bar and restaurant hosting the Ultimate Bartending Competition, an annual ritual by Monkey Shoulders. Young bartending enthusiasts were being tested for budgeting, service, nosing, measuring, and mixing before they are shortlisted for the regional finale, and going forward the winners will be sent abroad for the grand finale. And standing behind the bar, pouring out different measures, and coordinating the contest, in its third year now, was the legend himself.

Pankaj Balachandran, the brand ambassador of Monkey Shoulders Whisky, one of the stars from the William Grant & Sons' portfolio, is also a partner with the much active Bar Back Collective. The initiative aimed at improving F&B industry that started as a collaborative project by Vaibhav Singh, Anand Virmani, Arijit Bose and Pankaj has been working on creating unique restaurant or bar concepts, which will put India on the top of the world hospitality map. Pankaj enjoys a high by working behind the bar, representing Indian at various international forums and travelling India with the ultimate contest of bartenders by Monkey Shoulders that travels across India, before going international is not just fueling his professional passion, but mentoring young bartenders, who are the future of an industry that looks promising gives him a sense of satisfaction.

For all the fame and success that he enjoys from bartending, Pankaj gives credit to the Taj Management Programme that put him in charge of a bar, which more or less marks the beginning of an illustrious career. He was first attracted to wine appreciation. "I went on to acquire professional expertise and certification as a wine sommelier and won many prestigious competitions." It was a chance meeting with his now partner Arijit, a legend behind many successful bars worldwide that widened his beverage profile. Around 2011 onwards he was juggling both bartending and wines. When he left Taj after five years, he was well versed in running beverage programmes conducting wine, cocktail, and bartending programmes on his own. He did not choose to go down the road well taken, and instead of the management side of the hotel industry he chose to bartend, and the rest is history.

The time is ripe for bartending, and we see more and more youngsters choosing this as a career and that includes the girls. Pankaj agrees, "Hyderabad, especially is an upcoming market. People with disposable incomes are preferring to travel and are exploring the consumption trends across the world. They are beginning to enjoy cocktails and not just straight drinks. And the bartenders too are updating themselves to be able to serve the guests."

Pankaj says serving cocktails is not just about drinking, it is an experience, and the city is warming up to the idea. "Glassware, fresh ingredients, the punch bowl with fruits, the garnish, ice used – a great cocktail experience is all this, and I am amazed how well bartending has evolved here. Take for example this bar. I was happy to see my favourite Nick Nora glassware which is my favourite to serve Martini and Manhattan at the bar."

The drinking standards have changed too, "Earlier, 10 years ago if someone ordered a Whisky-Coke, I would have probably judged him. At the end of the day, it is a beverage, and one should have it the way one enjoys it. One day I had a guest who had a Scotch aged for 40 years with Ginger Ale. It was an expensive Scotch, and it is about how he enjoys it. In India, we have purists who would like to drink Whisky with water, which is fine. That's said, India is a hot country, and serving a warm drink like Whisky neat is not the best way to have it. And, going back in time when we read about the golden age of whisky in the 1700s, we realise that the first cocktails in the world were indeed whisky cocktails – 90 per cent Whisky and 10 per cent Gin was one of the ways people had their whisky. So, somewhere along the way, we learnt it all wrong. I am glad Whisky cocktails are making a comeback," states Pankaj Balachandran.

At last, Decentralisation and repeal of CRDA act bills Introduced in council

Keep protesting, government will not go back on CAA: Amit Shah

Deepika Padukone asked by Kangana Ranaut to Apologise for...
Top
We use cookies for analytics, advertising and to improve our site. You agree to our use of cookies by continuing to use our site. To know more, see our Cookie Policy and Cookie Settings.Ok