A Science teacher leads by example 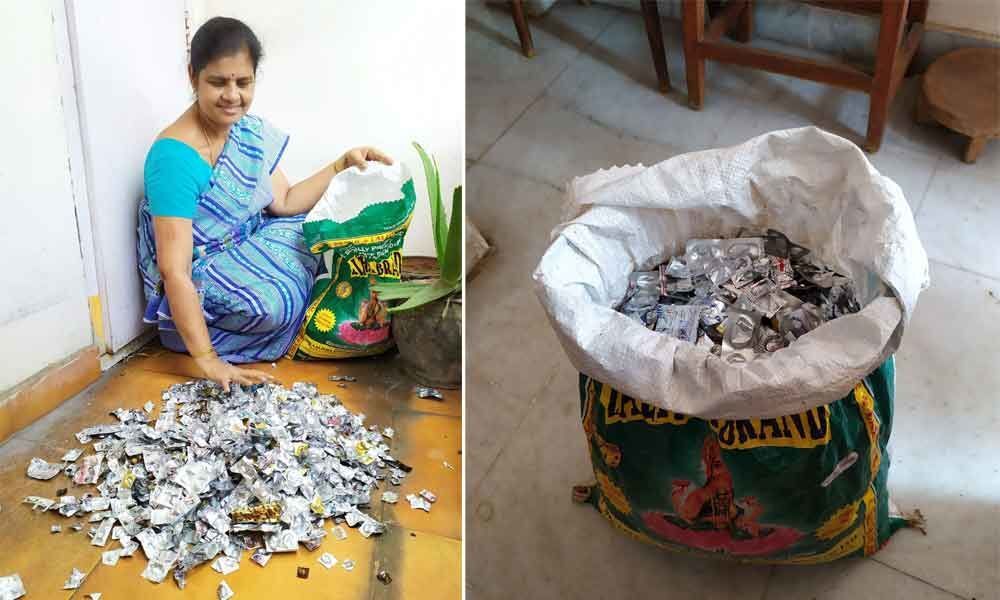 Gorle Satyavathi, a science teacher, in Visakhapatnam has taken an initiative to save environment by collecting tablet strips in a bag

A small step at an individual level makes a huge difference. It is the same thought that made Gorle Satyavathi to consider the task of collecting leftover tablet wrappers instead of dumping them in a bin.

Five years down the line, the empty rice bag in which she has been collecting the tablet covers weighed seven kilos. She informed the GVMC staff to collect the same for recycling.

Working as a science teacher at Visakhapatnam Steel Plant's Visakha Vimala Vidyalayam Primary School, Satyavathi believes that any step towards conserving environment starts from home. "My husband and sons not only support my endeavour but also follow suit," she shares.

The science teacher for primary classes feels that it is imperative to familiarise young minds with environmental issues and encourage them to show some concern towards saving the planet in whatever way possible.

For those, who believe that an individual cannot change a system, Satyavathi proves them wrong. She believes that each person has a capacity to bring in change.

"If I could do my role of segregation of waste at source diligently, it sets an example for others to follow suit," she elaborates.

Satyavathi started collecting tablet wrappers used by her husband and family members since 2014. "It was the year when Swachh Bharat mission was launched and I decided to support the cleanliness initiative with this humble beginning the very next day."

Given the environmental impact of these emptied tablet strips, "I thought it is better to either hand them over to the GVMC staff or an NGO for recycling," she explains.

Even at school, Satyavathi ensures collection of unused and broken pens from students. "I explain the impact of plastic menace to them and ask them not to mix plastic with domestic waste.

While some deliver the message at home, some talk about the issue with their friends. I am glad that they do come up with suggestions to conserve environment, seeking my assistance," she adds.

Her gesture drew appreciation from various quarters, including civic authorities.

"If each individual could come forward to do their part in waste segregation, it would go a long way in making Visakhapatnam much cleaner," says D Sridhar, zone commissioner of Gajuwaka.