Advani's piece of advice to BJP 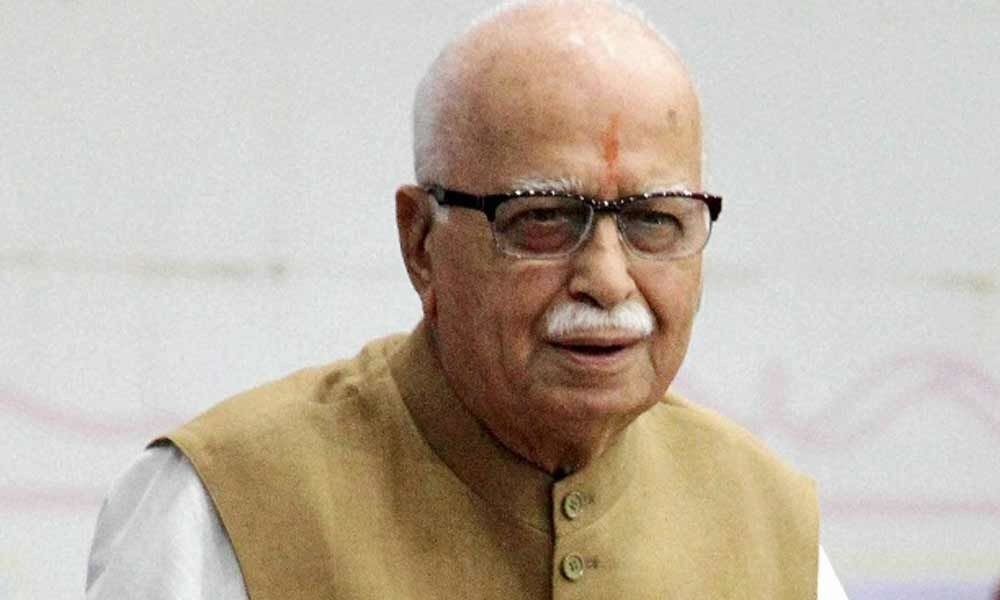 At a time when people are getting frustrated at hearing political slights which are nothing but brash and are confrontational in style, the call from...

At a time when people are getting frustrated at hearing political slights which are nothing but brash and are confrontational in style, the call from BJP's founder leader and patriarch L K Advani asking all BJP members to look back, look ahead and look within comes as a whiff of fresh air.

Advani, who was known a Loh Purush had to face several moments of insult in the last five years but maintained stoic silence being a statesman and gave a wise advice to the present genre of leaders who are being led by Modi-Shah jodi to have an honest introspection.

The timing of Advani's address is something which one needs to appreciate. As the senior most leader who has crossed 90 has appealed to the voters to rethink and decide about the party they want to see in power when the Election Commission would announce the results on May 23.

His words "elections are a festival of democracy. But they are also an occasion for honest introspection by all the stakeholders in Indian democracy – political parties, mass media, authorities conducting the election process and, above all, the electorate" speak volumes about the present-day political scenario both at the national level and at in the States.

His remarks are a reflection on the murky political scenario the country is witnessing today. In one word, what Advani has said boils down to the fact that the country is going through a real testing time and the situation was no better than that of Emergency if not worse. The only difference is that during Emergency, the iron lady Indira Gandhi had used to push all those who opposed her behind bars but now the mode of harassment has become hi-tech.

The party in power is using Central agencies like Income Tax department, Enforcement Directorate, NIA, CBI and even the local police who conduct raids, create an atmosphere as if heavens have fallen but return empty handed.

Advani's remarks are also a sort of warning to the media to wake up and try and regain its past glory at least to some extent. During Emergency, it was the youth and the media who were in the forefront to fight against the emergency despite all the problems they had to face.

There were people like Ramnath Goenka who had the nerve and verve to print his newspaper The Indian Express with blank front page. Even the reporters were independent and did not have to face the kind of pressures they now have from their managements.

They had the ability and freedom to ask questions and extract the news they wanted. The craze for news was more than the fancy for sensationalism. But now the media is entirely different.

The respective governments whether it be at the Central level or State level are virtually resorting to arm-twisting. The reporters too have become timid and do not do their homework properly. A very few do their homework or read books and papers to keep them abreast with information.

Against this backdrop, the few words of Advani speak volumes and has come as a caution to all those want democracy to be protected and the country saved from anarchy. That is exactly what he perhaps means by saying "to look back, look ahead and look within".

The notable aspect of Advani's comments is that he did not directly target Modi-Shah jodi but yet he did. That is the art of making his point in a straight but diplomatic manner. His blog gives a feeling that his remarks are directed against all in general but he at the same time does not hide they have clear reference to the way the BJP has been functioning in the last five years.

It is also noteworthy to see that he did not wish his party a success and refrained from mentioning Modi and Shah.

Advani has not missed out on asserting that the "heroic struggle against the Emergency rule was precisely to uphold" the values he has mentioned. The remark is likely to bring cheer to those in the Opposition camp who have often claimed that the country has been going through an undeclared Emergency since May 2014.

His comments are so candid that they have a subtle message for the Modi-Shah duo, who now have the reins of the BJP firmly in their hands. Incidentally, Shah has replaced Advani from Gandhinagar Lok Sabha constituency.

His observation "Nation First, Party Next, Self Last", is being seen in political circles as the hardest punch. "The essence of Indian democracy is respect for diversity and freedom of expression. Right from its inception, the BJP has never regarded those who disagree with us politically as our 'enemies', but only as our adversaries.

Similarly, in our conception of Indian nationalism, we have never regarded those who disagree with us politically as 'anti-national'." This is nothing but a direct reference to the way the political atmosphere in the country got polluted.

If one watches the election campaign, the most heard remarks from the Prime Minister are "I regret that we could not develop West Bengal as we developed other States because Chief Minister Mamata Banerjee is a speed-breaker in the way of rapid development in the State.

She is not interested in eliminating poverty as her brand of politics would then come to an end." Talking about son rise and sunset in Andhra Pradesh and making false claims of Centre extending helping hand to the residuary State and harping on the subject of family rule in Telangana and alleging that all those who raised questions about recent air strikes following the Pulwama attack as "anti-nationals", traitors" or worse by the Prime Minister apparently has not gone well with Advani.

The Prime Minister has also been saying that the Congress and the Communists share the same trait. "They need poverty. They need the poor. Their political gain is in keeping the people in poverty. This is the reason they have put brakes on development."

So when Advani says that those who disagree with us politically should not be seen as our "enemies", but only as our adversaries, it certainly is a sane advise to the party. How the present breed of leadership looks at it does not make any difference.

The BJP patriarch has very aptly shown his journalistic talent. He too was a journalist during his younger days. This is something which he himself told me when I was covering BJP in Delhi and he was the BJP national president then.

Another term which is being used very often by politicians of all shades is 'Congress mukt Bharat', 'Congress-BJP mukt Bharat' and so on. A political party or a conglomeration of parties emerging as alternative is a healthy sing in democracy but giving call to pack other parties is not proper.

No party can kill the other. In democracy there is possibility that a particular political party may be forced to go into hibernation due its own omissions and commissions but if one dreams that only one party should survive and others should be thrown into the Bay of Bengal, then that would be the biggest foolish thought as politics is dynamic situation.

The political maturity of Advani is also reflected when he said, "I take this opportunity to convey my most sincere gratitude to the people of Gandhinagar, who have elected me to the Lok Sabha six times since 1991. Their love and support have always overwhelmed me."

He did not make any reference to his successor Amit Shah. He has demonstrated that "defense of democracy and democratic traditions, both within the party and in the larger national setting, has been the proud hallmark of the BJP."

Thereby telling the party present leadership that internal dissent should be tackled properly and not create groupism or encourage sycophancy. The party should learn to carry all along with them and that should be the benchmark of real leadership is what Advani has said. Another noteworthy comment of Advani was the mention of electoral funding and the need to be transparent.

But the tragedy is that these observations of Advani would not see the limelight in the form of discussion within the party and the Opposition would love to use it as a stick to beat the saffron party and they too will not ponder on how to implement the suggestions in their own party and set an example since no one wants to set examples. Only they want to rule.