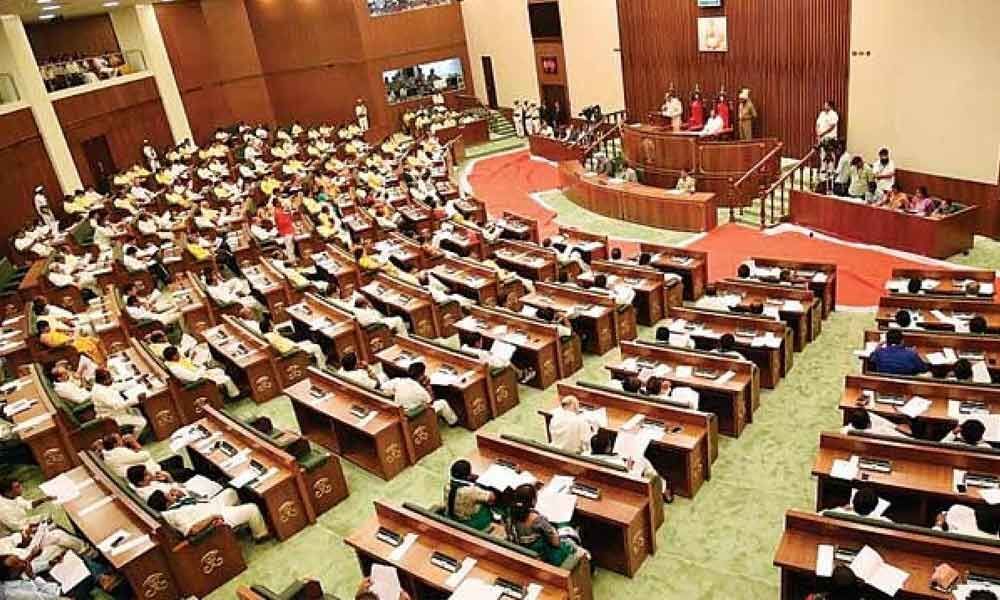 Remember, what you do now will come back to you in the future.

"Remember, what you do now will come back to you in the future. Life has a funny way of making you deal with what you make others go through. What goes around comes around."

If we look at the politics of Andhra Pradesh in the last five years, this quote of wise people explains the situation in one sentence. The TDP which came to power dashing the hopes of the YSRCP in 2014 was on cloud nine.

The YSRCP which, despite getting good percentage of votes and respectable number of seats in the State Assembly, faced rough weather.

During the last five years, most of the time the Assembly session witnessed acrimony, ruckus and pandemonium - the Opposition pouncing on the government trying to nail them and the government with its absolute majority trying to shout back and silence the opposition.

In the process what happened was an element of character assassination crept into it. The TDP leaders including the then leader of the house N Chandrababu Naidu had on many occasions referred to the cases pending against the then Leader of Opposition Y S Jagan Mohan Reddy and repeatedly addressed him as A1.

In every speech of his, whether it was from a public platform or on the floor of the Assembly, he had a catchword, "I have 40 years of experience in politics."

India, which is the largest democracy of the world politics, seems to be increasingly succumbing to the love of money and garnering immense power and the ability to control people is gaining ground rather than serving them.

Personal ambitions are gaining upper hand rather than serving the people. This phenomenon was witnessed in the last five years and the people thought of giving a chance to the young leader believing that it would bring change.

The YSRCP has got 151 seats with about 50 percent vote share in the Assembly and the TDP had to contain with 23 seats with a vote share of about 40 percent. But things still do not seem to have changed much.

The Leader of the Opposition still continues with his catchword and the new Chief Minister, who is young and energetic and aggressive by nature, goes on repeating his two catch words, "Jagan ane nenu" (I, Jagan) and God has written a beautiful script with 23. Chandrababu Naidu purchased 23 MLAs of YSRCP.

Now TDP got only 23 seats and the results also came on May 23." This he has been repeating at forums. The big question now is will personal ambitions continue to gain upper hand?

In the last Assembly, the YSRCP always alleged that its voice was being muzzled. Now they claim they have set a new trend and are allowing the Opposition to express their views. But the TDP alleges that the ruling party is suppressing their voices.

The Leader of the Opposition feels that he is being personally targeted, and the language used against him is unbecoming of a person holding the high position. But then, he seems to have forgotten the fact that 'what you do to others comes back to you'.

Well, in the newfound enthusiasm of coming to power, the ruling party and its leader who has promised to set new precedents in the Assembly should show greater magnanimity, patience and allow the Opposition to commit mistakes, if it wants to come back to power in 2024. The Chief Minister should take a leaf out of the working style of Prime Minister Narendra Modi who does not speak much in Parliament.

And when he speaks, he tears into the Opposition in such a way that the message goes straight and hits the target but at the same time it does not appear to be a shot from close range. Similarly, the Leader of Opposition too should try to see that they do not create ruckus in the Assembly and not get provoked by the ruling party.

Whatever they want to say, they should go back to the people and explain to them and allow people to judge. At the same time, they should effectively counter the ruling party if it slips on facts and figures.

In the past few decades, a disturbing trend has been emerging in all fields and it has been more so in Indian politics. That is the phenomena of character assassination. One might say that it is a timeless phenomenon and nothing new. But now it is taking dangerous proportions.

It has crept into all sectors including mass media and is creating distrust about certain individuals in the minds of the managements. In politics, lies, insinuations and ridicule have become the effective means of character assassination in the power struggle.

This has resulted in growing public distrust in many traditional institutions. There is need for charismatic leaders who can speak for the genuine people and against "corrupt elite".

Unfortunately, the corrupt elite continue to enjoy patronage of people in power and also succeed in branding others as henchmen of so and so leader.

It may be for achieving their narrow personal gains or populism but such character assassination without having proper understanding about the real background of the real story is also not good.

This only raises the bar of incivility and goes against the principles of civil debate. This phenomenon started assuming dangerous proportions only for past 15 years or so.

The big question now is how we go back to the principles of civil debate.

The more we keep arguing, the more we create an environment of incivility. It really is detrimental to democracy as an institution.

I always believed that education is a key to reversing that trend. But today even educated persons including the so-called intellectuals who have occupied top positions are resorting to character assassination either directly or indirectly.

India, which is known as the largest democracy of the world, elected representatives, it seems, have forgotten that they have certain work enshrined in the Constitution for them to do and not to indulge in mudslinging and casting aspersions on each other.

The politicians swear by people but have no fear of the people who elected them to the highest law-making bodies to safeguard the interest of the nation. Instead of keeping their dignity and, of course, of the dignity of their electorates, they are bent upon to play ugly politics of character assassination.

It is also said that Jealousy is another reason for indulging in character assassination. The mindset of a jealous person is manipulation. And that is predominant in modern day politics. Hopefully the trend will change, and Ache Din will be seen.