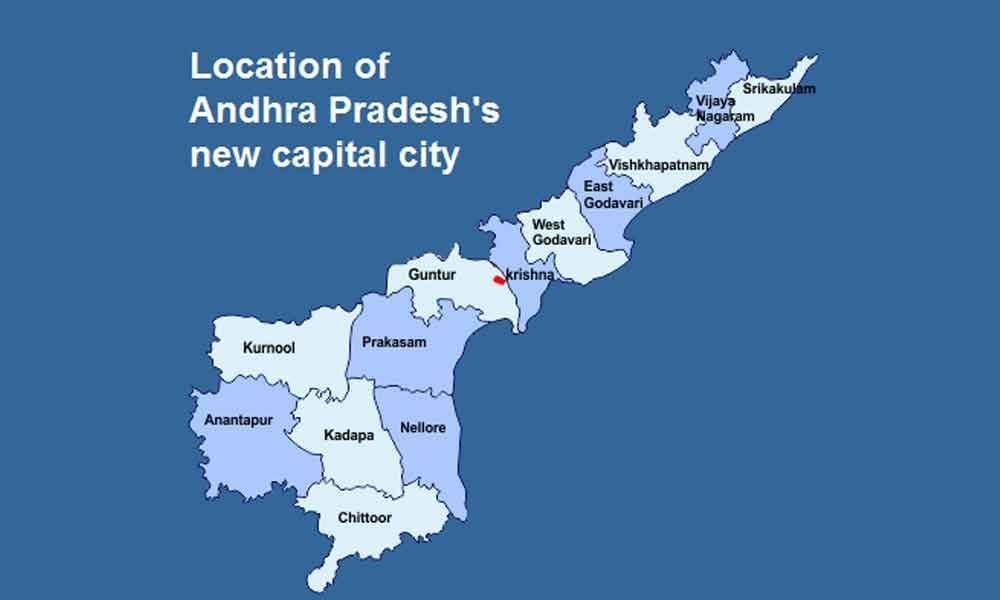 Recent floods in the river Krishna once again brought to focus the suitability of the area chosen for locating the capital city Amaravati for the bifurcated state of Andhra Pradesh.

Recent floods in the river Krishna once again brought to focus the suitability of the area chosen for locating the capital city Amaravati for the bifurcated state of Andhra Pradesh.

River Krishna discharged maximum flood water of about 8 to 9 lakh cusecs at the Prakasam barrage near Vijayawada with inflow more than the outflow water level upstream of the barrage got built up inundating part of the low- lying areas earmarked for the capital city.

The residential building of the former Chief Minister of Andhra Pradesh Chandrababu Naidu which was within the flood bank was also threatened with flood waters coming near the building.

The municipal administration minister after the floods receded raised issue about the suitability of the place for capital city since it is prone to floods and what would be the situation if a much bigger flood were to come .In the floods of 2009 the discharge was 11 lakh cusecs at Prakasam barrage.

He also raised the point about the high cost involved in building buildings and laying roads given the nature of the soils. Another important BJP leader who till recently was with TDP hailing from Rayalaseema gave a public statement stating that the chief minister of Andhra Pradesh is contemplating four regional capitals in four different regions.

In my book whose capital Amaravati while discussing the manner in which the site for the capital was chosen, I observed as follows: "Amaravati will go down in history as a capital city located without any feasibility study or survey" .

The then government in power disregarded the recommendations of Siva ramakrishnan committee, a statutory committee appointed under the AP Reorganisation Act whose recommendations favoured establishing a decentralised approach and a warning not to go for a greenfield megacity which they thought would be suicidal. Government at that time exactly did the opposite.

But even before selecting site for this mega city Amaravati no feasibility study about the suitability of the land was done. Government went ahead and located it right on the banks of Krishna river in a flood prone area without any discussion or debate on this issue.

Recent election results are a testimony to anger of people of Rayalaseema about the manner in which the capital city was located which they felt was done in a unilateral manner harming their interest.

Out of a total MLA seats of 52 from Rayalaseema, Telugu Desam Party won only 3 seats. It should also not be forgotten the capital city location has a historical significance in the context of Andhra Pradesh. When Andhra State was carved out of the Madras Presidency after a prolonged discussion capital was located at Kurnool and High Court at Guntur.

After the formation of the Andhra Pradesh state combining Andhra and Telangana area both shifted to Hyderabad. Should not a decision taken so unilaterally ignoring the sentiments and wishes of a substantial portion of the population be re-examined more so when it is becoming apparent the site selected may not be the right one for location of the capital city?

True lot of water has flown down the Krishna river in the last five years. But then in the name of finalisation of designs etc. no great groundwork was done for four - and- a half years.

Massive construction work was only started six months before elections. There are also serious complaints that the land pooling was not voluntarily done and there's a lot of inducement and coercion in the whole process.

It would be worth looking into the whole process of land pooling find out how many of them are really interested in taking back their land or going ahead with the project. Assessment of the expenditure so far incurred also need to be factored in.

As Vadim Rossman observed in his book "Capital cities : Varieties and patterns of development and relocation ": Whether all regions and groups in the state are well represented in the capital and can feel their presence in the capital and benefit from the capital will decide how inclusive the capital city is." This definitely is not the case with Amaravati.

Same author in the same book further noted how successful capital city location was done by Anglo-Saxon liberal federalist regimes where the very location of a capital city is the outcome of reconciliation and compromise between different groups trying to integrate themselves in all these countries capital cities are a great success.

Neither of these things happened at the time of location of the capital city for new state Andhra Pradesh in 2014. It is very important now to start a debate discuss all these issues threadbare.

Issues of location suitability downsizing the megacity concept to one of administrative capital with some of the functions like the judiciary distributed to different areas all are issues which need a thorough discussion and a decision based on principles of compromise and consensus between different regions and their interests and suitability of any specific site for location of capital.

Any attempt to stall it stating that the decision is already taken will only lead to further problems at a later date with undesirable consequences.