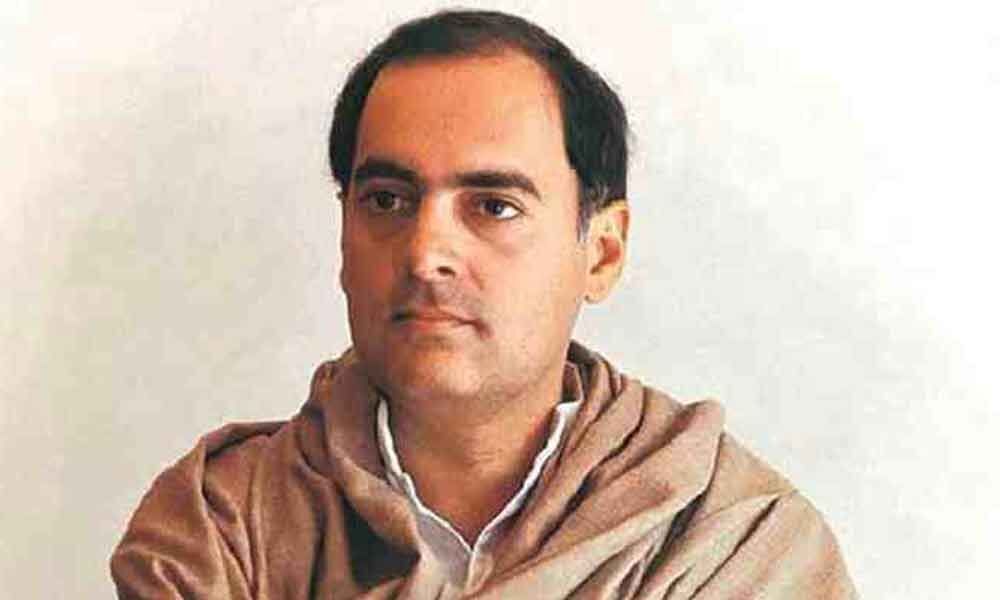 Exactly 28 years ago, our country had witnessed one of the most unfortunate days in the history of independent India.

Exactly 28 years ago, our country had witnessed one of the most unfortunate days in the history of independent India.

Like today, it was a Tuesday on May 21, 1991, when we lost former Prime Minister Rajiv Gandhi, a leader who gave a new direction to India's journey into the 21st century.

His brutal assassination had plunged the country into deep and inconsolable mourning.

Although Rajiv Gandhi had served as the Prime Minister of India and also the Leader of Opposition for a brief period, he has left an indelible mark in achieving growth for this country and for preservation of human values in politics.

He aimed at bringing about a vibrant change and a new guiding path to the younger generations.

If Pandit Jawaharlal Nehru had protected the integrity of India, Indira Gandhi had brought administrative reforms for eradication of poverty; and it was Rajiv Gandhi who enabled India to compete globally.

At the age of 40, as a youngest Prime Minister of India, Rajiv Gandhi laid the foundation of a modern India during his regime from 1984 to 1989. He was like thunder in Indian politics.

Rajiv Gandhi is rightly described as the 'Father of Information Technology and Telecom Revolution of India'.

In 1984, he invited Sam Pitroda, who had become a naturalised US citizen, to return to India and attempted to modernise India's telecommunication system.

The facility of telephone was limited to a few areas and confined a very small population. With a visionary approach, Rajiv Gandhi established the Centre for Development of Telematics (C-DOT) in August 1984.

C-DOT, an autonomous telecom R&D organization, developed state-of-the-art telecommunication technology and revolutionized the entire communication network in the country triggering a PCO (Public Call Office) revolution connecting the people with the outside world.

The MTNL (Mahanagar Telephone Nigam Limited) and VSNL (Videsh Sanchar Nigam Limited) were established in 1986, which helped in the spread of telephone network.

One after the other, six technology missions related to telecommunications, water, literacy, immunisation, dairy and oil seeds were established.

It was due to his telecom revolution that almost everyone cutting across all sections in the country today is holding a mobile phone and computer with household.

According to a report published in The Christian Science Monitor on August 17, 1989, "After Prime Minister Rajiv Gandhi rose to power in 1984, the computer became the emblem of his ambitious plan to modernise this backward, poverty-stricken country.

The youthful leader and computer buff issued a clarion call to lift India into the 21st century with the help of western technology.

Production and import of computers and other electronics were liberalised. A new breed of government technocrats exerted influence in the corridors of power."

In 1989, there were more than 100,000 computers in factories, offices, schools, and homes, triple the number a few years ago.

It was due to Rajiv Gandhi's visionary policies that today India is among the top nations in IT sector. The modernisation of Indian Railways too began under Rajiv Gandhi's regime with the introduction of computerised railway tickets.

After the untimely demise of Sanjay Gandhi on June 23, 1980, in an air crash, nearly 70 senior leaders of Congress party wrote a letter to Indira Gandhi requesting her to bring Rajiv Gandhi into politics.

As an obedient and caring son, Rajiv Gandhi entered politics to support his mother in difficult times.

Rajiv Gandhi began his political career by addressing the national convention of farmers on February 16, 1981.

He also contested from Amethi Lok Sabha constituency; the seat earlier represented by his younger brother Sanjay Gandhi, in August 1981 and got elected with a huge majority.

He was also appointed as the General Secretary of All India Congress Committee. As a Parliamentarian and politician, he learned new things and instead of giving long speeches, he gave preference to listening and understanding the problems being faced by the people.

He had executed all the responsibilities that he was assigned with total confidence and dedication. The successful conduct of Asian Games in 1982 is one of examples of Rajiv Gandih's efficiency.

Rajiv Gandhi started the Human Resource Development Ministry in September 1985 and made Dr. P.V. Narasimha Rao as the cabinet minister, who was considered as multi-lingual intellectual.

Rajiv Gandhi also introduced a new National Policy for Education (NPE) in May 1986, which was aimed at giving equal opportunities of education to women, SCs and STs.

Operation Blackboard was started in 1987 to provide primary level students with the necessary institutional equipment and instructional material to facilitate their education.

In order to universalise the education, Indira Gandhi National Open University was started in 1985 and provided 'Distance and Open Education'.

In order to crush horse-trading and commercialisation of politics, he introduced Anti-Defection Law to end corruption in politics through the 52nd Amendment to the Constitution in 1985.

The watershed management was introduced to support farming in rain-deficient areas.

Rajiv Gandhi believed that youth should play pivotal role in nation building. And hence, reduced the minimum age for voting from 21 to 18 years.

He resolved the disputes pertaining to North East. He adopted a visionary approach to resolve the problem of infiltration in Assam and granted special category states status to Mizoram and Arunachal Pradesh. He had also resolved the burning problem of Punjab with certain tough decisions.

When he was the Prime Minister, he learned that Opposition Leader Atal Bihari Vajpayee was suffering from kidney ailment.

By including Vajpayee in the Indian delegation for United Nations visiting USA, he ensured that Vajpayee gets treatment.

It is reported that Vajpayee himself mentioned in an interview with famous journalist Karan Thapar.

Unfortunately, such a visionary leader with a kind heart for everyone was falsely implicated in the Bofors scam. He was given clean chit by the Delhi High Court in 2004 (when BJP was in power).

Instead of giving an explanation on his alleged corrupt role in Rafale deal, in order to divert the people's attention in these recent elections, PM Narendra Modi, immorally, attempted to defame Rajiv Gandhi as Bhrashtachari No1.

The then Prime Minister VP Singh, who was acting a tool into the hands of BJP, ignored repeated alerts issued by the intelligence agencies on the threat to the life of Rajiv Gandhi and did not provide the Special Protection Group (SPG) security.

While Rajiv Gandhi was busy in the campaigning in Tamil Nadu, terrorists assassinated him using a human bomb on May 21, 1991.

It is ungrateful and inhumane if we do not recognize the sacrifices made by our own leaders. Pandit Nehru had spent 12 years in jail for country's freedom.

(The author is a national spokesperson, All India Congress Committee)