The mistakes which Rahul has made 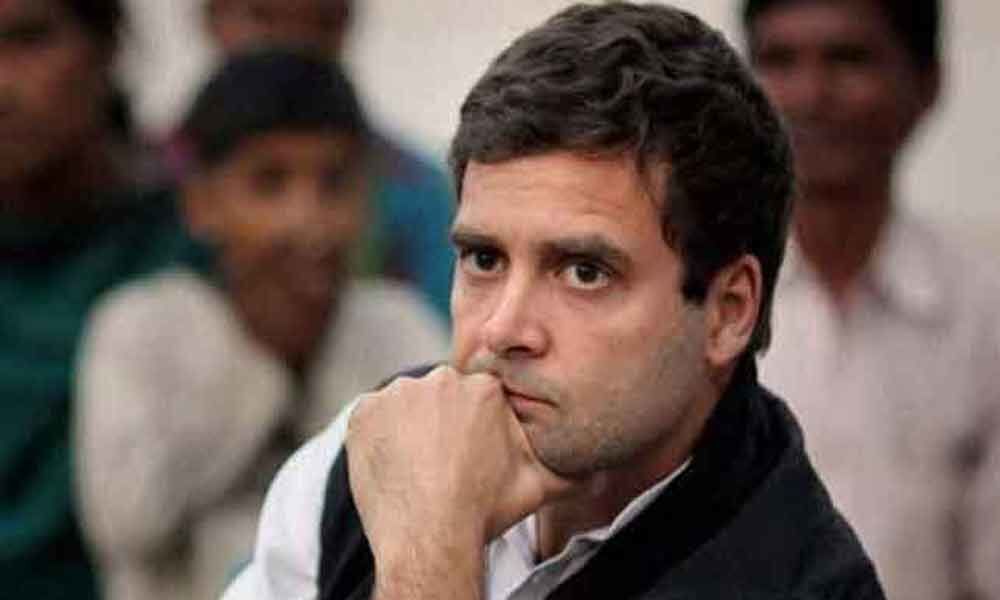 Although the latest poll surveys suggest that the Bharatiya Janata Party (BJP) may not be able to get a majority of its own in the ongoing polls, the...

Although the latest poll surveys suggest that the Bharatiya Janata Party (BJP) may not be able to get a majority of its own in the ongoing polls, the leaders of the mahagathbandhan (grand alliance), which has not been formed except in bits and pieces, are bound to regret their lost opportunity.

If they had only been able to overcome their self-centred political instincts and learnt to compromise, the BJP would have been in greater trouble.

Now, the various regional satraps and the standard-bearer of the country's oldest party will have to brace themselves to spend another five years in the political wilderness as the BJP gains ground by virtue of being the largest party (though possibly still short of a majority) and the leader of the largest group.

There is little doubt that Rahul Gandhi will have to share much of the blame for this turn of events. As the Congress president, it was incumbent upon him to reach out with greater zeal towards the seemingly stiff-necked State-level leaders who have retained their ill-will against the 134-year-old one-time behemoth.

Rahul Gandhi's first outreach should have been towards Mayawati, especially after the signs of her bonhomie with Sonia Gandhi at H D Kumaraswamy's swearing-in ceremony last summer.

Even after Mayawati walked away from an alliance with the Congress in Madhya Pradesh and Chhattisgarh after Digvijay Singh's customary faux pas about the BSP czarina being under pressure from the BJP, she had said that she had complaints only against Digvijaya Singh, who, she thought, was a BJP agent, and that she had nothing against Sonia Gandhi and Rahul Gandhi.

Yet, from that time onwards, her attitude towards the Congress started hardening. This was the period when Rahul Gandhi should have taken the initiative to keep the Congress's ties with her alive by allaying her suspicions about the (somewhat tattered) Grand Old Party trying to wean away the Dalits from her party.

But the Congress not only allowed the relations with the BSP to deteriorate but even made it worse by reaching out to the rival Dalit leader, Chandrashekhar Azad "Ravan", who was visited in hospital by Priyanka Gandhi.

Considering that Akhilesh Yadav did not want the ties of the Samajwadi Party (SP)-BSP combine with the Congress to fray beyond a point, Rahul Gandhi might have enlisted his support to mollify Mayawati.

Instead, it appeared that the Congress's main adversary in UP was the SP and the BSP and not the BJP. The latter could not but have been pleased by this development.

Even Priyanka Gandhi's appointment as the Congress general secretary in eastern UP gave the signal that the party was fighting the Opposition gathbandhan in the State rather than the BJP.

The focus on UP appears all the more strange since the Congress has ceased to be a major player in the State. If the party wanted to build itself up for a future contest, it could have waited till after the current round of elections instead of playing the spoiler where the political fortunes of Akhilesh Yadav and Mayawati are concerned.

Rahul Gandhi made the same mistake in West Bengal where he accused Chief Minister Mamata Banerjee of making "false promises".

Again, since the Congress is not much of a player in West Bengal where the BJP has edged ahead of both the Left and the Congress, there was little to gain by criticizing someone who was trying to form a gathbandhan of sorts though without much success.

Considering that Rahul Gandhi was hailed as a possible prime ministerial candidate by, among others, H D Kumaraswamy, the DMK's M K Stalin and the Rashtriya Janata Dal's Tejashvi Yadav, the Congress president can be said to have had a head start over other as yet unannounced contenders like Mamata Banerjee and Mayawati.

Rahul Gandhi was also entrusted with drafting a common minimum programme at a meeting hosted by Sharad Pawar where Mamata Banerjee, Andhra Pradesh Chief Minister Chandrababu Naidu and Delhi Chief Minister Arvind Kejriwal were present along with others like Farooq Abdullah. It showed the Congress president's rising stature.

Not long afterwards, there was talk about a Congress-Aam Admi Party (AAP) alliance being formed to contest the parliamentary polls in Delhi. Moreover, Rahul Gandhi was said to be in favour of such a pact.

But nothing came of it and, once again, the BJP is likely to be the gainer from a three-cornered fight, as in UP.

Rahul Gandhi has succeeded in shedding his "Pappu" image of being a part-timer in politics who cannot be taken seriously. But he is yet to learn that politics is the art of the possible.

The essence of this aphorism is that a leader or a party will have to tailor their policies in accordance with the existing circumstances and opportunities, and not out of pique or hubris, as the Congress appears to have done in UP.