About comets and space 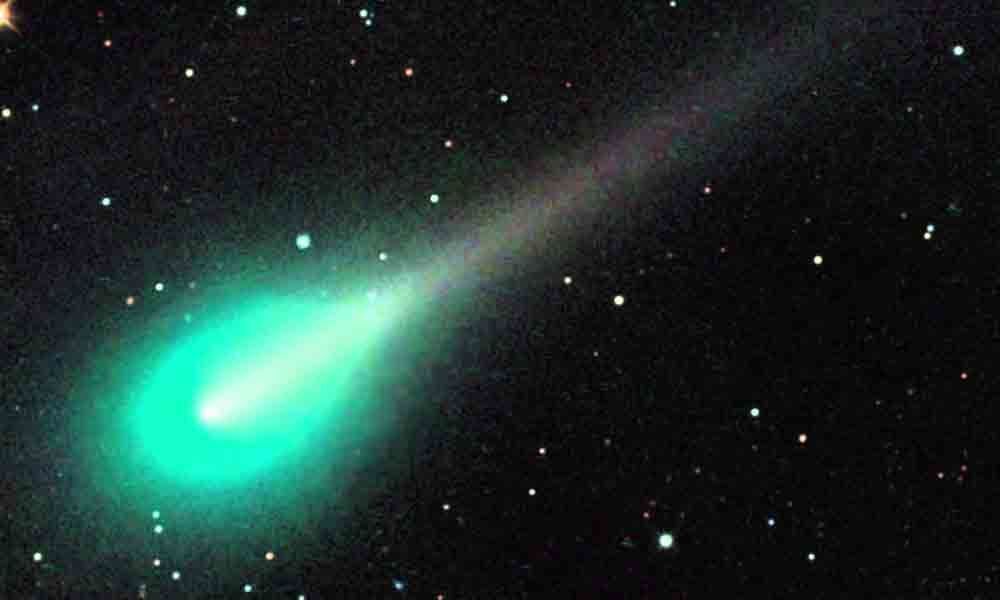 Big chunks of rock and ice travel around the sun, these are comets, with beautiful “tails” of gas and dust that shine with the sun’s light!

Big chunks of rock and ice travel around the sun, these are comets, with beautiful "tails" of gas and dust that shine with the sun's light!

Sometimes asteroids, meteors, or comets bump into planets or the moon as they move through space. When they do, they leave an indentation or dip in the planet or moon's surface. In this project, the wet sand from the cup was like an asteroid, meteor, or comet, and the pie pan with sand was like a planet or moon. To make the best crater, it doesn't really matter how much sand you take from the cup, but how hard you fling it. Even just a little wet sand thrown at the pan can make a big crater!

Catch a Comet: Make a colorful 'comet' that you can play catch with! If you like, you can make it glow-in-the-dark for nighttime fun. What you need: Plastic grocery bag, Scissors, Tennis ball (or any other soft ball), String or ribbon, Glow-in-the-dark paint, Paintbrush.

What You Do: Use the scissors to cut the handles off of the plastic bag. Carefully cut down each side of the bag, to make a flat piece of plastic. Put the ball in the middle of the plastic, and pull the corners together. Tie the string around the plastic, close to the ball, so the plastic won't slip off. Carefully cut slits in the plastic, making 1 or 2-inch strips. Decorate the comet using the glow-in-the-dark paint. You could also use stickers or add ribbon.

When the paint is dry, you're ready to play! Your homemade comet can streak through the air with its tail behind it, just like the real thing! The tennis ball is like the ice and rock chunk of a comet, and the plastic bag makes the coma and tail.

A Penny As Big as the Moon?: A comet circles around the sun in a long orbit. How much bigger than a comet is the moon, or the earth, or the sun? Find objects in your house to show how big the earth would be if the moon was the size of a penny, or if a comet was smaller than the head of a pin. If the moon was as big around as a penny, how big do you think the earth would be? The earth is almost four times as big across as the moon is. If you put four pennies next to each other, that's how big the earth is across its middle. Can you think of something that is that size? We used a baseball as our earth.

If the moon is a penny, what object can show how big the sun is? The sun is huge – 109 times as big across as the earth is. Is there a room in your house that could fit 100 baseballs across it, if they were side by side? If the moon was as big as a penny, the sun would be a whole room!

How big do you think the moon would be if a comet was as big as this dot:. ? What about the earth and sun? Try to think of an object for each. If a comet was as tiny as that dot, the moon would be about the size of a beach ball (18 inches). The earth would be four times as big across as the beach ball. Can you think of something that size? Your dad standing with his arms stretched out might be as big around as the earth.

Now that you know how big the sun, earth, and moon are compared to each other, you might have an idea of how big our solar system really is! A comet is not really as small as a dot, or even a beach ball. Comets are between one mile and fifty miles across, not including the tail! Comets are huge! But when compared to other things in our solar system, they seem pretty small.