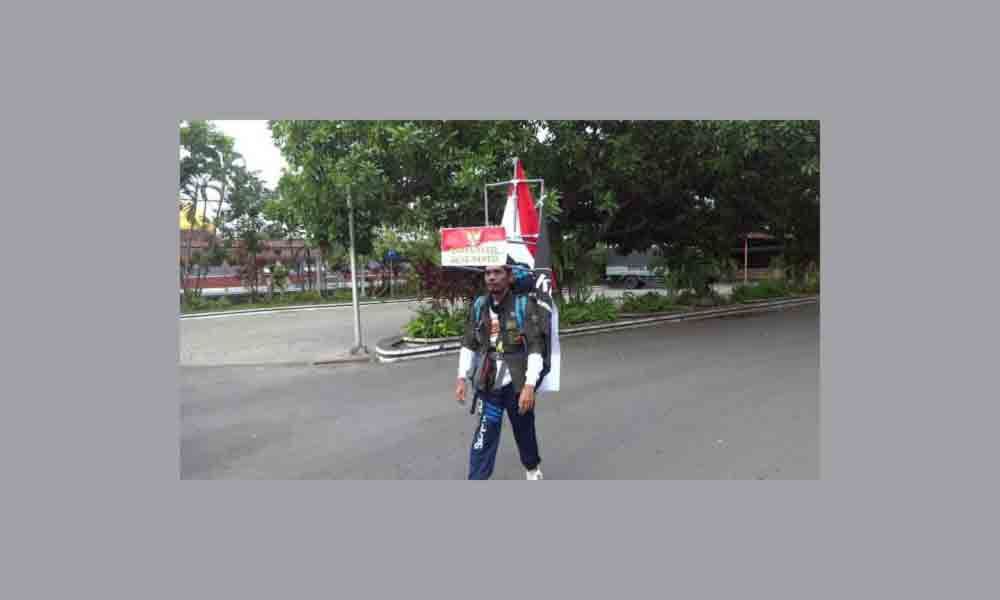 An Indonesian man has decided to walk 800 km in reverse from the eastern part of the Java island to capital Jakarta in order to seek the President's help in saving a forest close to his house.

Jakarta (IANS) :An Indonesian man has decided to walk 800 km in reverse from the eastern part of the Java island to capital Jakarta in order to seek the President's help in saving a forest close to his house.

According to social media reports, Medi Bastoni, 43, hopes to ask President Joko Widodo to give him a symbolic seed, to be planted in the forests on Mount Wills - situated around 20 km from his village Dono in the East Java province - in order to spread awareness about preserving nature.

Equipped with the Indonesian flag and a headpiece built with plastic pipes and fixed with a rear-view mirror which allows him to walk backwards, Bastoni set off from Dono on July 18 and expects to reach the capital on August 17, the Indonesian Independence Day, Efe news reported.

Bastoni said walking backwards was a metaphor for looking back at the past, and he wanted to pay homage to the history of Indonesia's independence struggle.

In his struggle to rejuvenate Mount Wills, which is currently undergoing a reforestation programme after suffering fires and illegal felling, Bastoni started with a backpack which weighs eight kg and a tiny sum of 300,00 rupiahs ($21), according to local media outlet Tribunnews.

His unusual mission has grabbed headlines in local media and also publicized in social media posts by those who meet him on the way, becoming a sensation in the country, with growing anticipation towards his arrival in Jakarta.

Bastoni said on a Facebook post on Thursday that he was "full of hope" on the eighth day of the walk, while his feed was full of posts thanking people for their help, inspirational and patriotic messages and photos of his journey on the roads of Java.