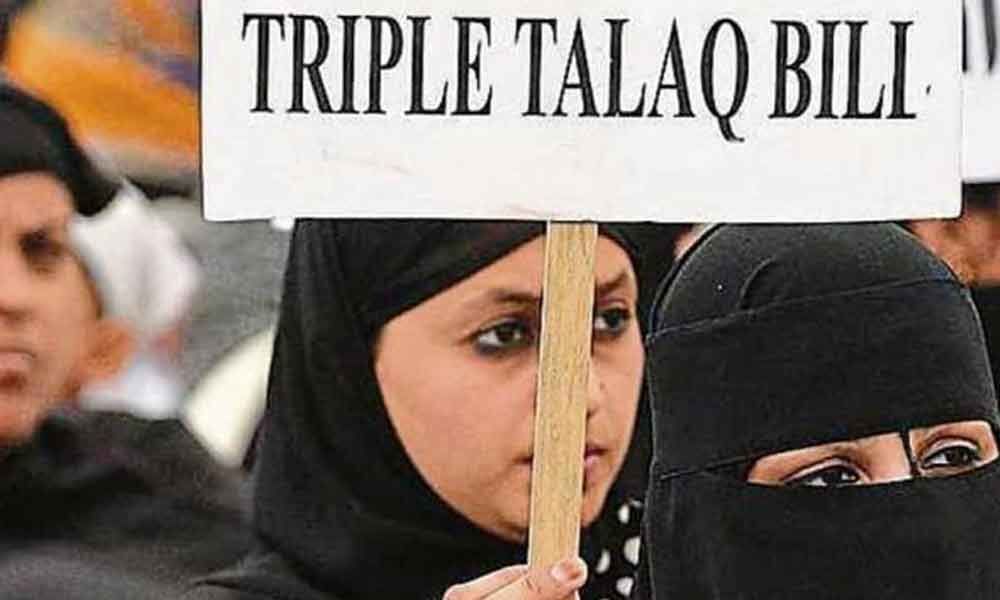 The Triple Talaq Bill, passed thrice by the Lok Sabha, cleared its toughest test in the Rajya Sabha too even as some parties opposed to the Bill and Nitish Kumar’s party and the AIADMK decided to abstain from voting.

The Triple Talaq Bill, passed thrice by the Lok Sabha, cleared its toughest test in the Rajya Sabha too even as some parties opposed to the Bill and Nitish Kumar's party and the AIADMK decided to abstain from voting.

Their absence from voting helped bring down the effective strength of the 240-member Rajya Sabha and the majority mark.

It is an admitted fact that Triple Talaq is an innovation (bid'at) and not inimical to Islam as it has been clearly stated in Islamic jurisprudence.

Every individual Muslim, with no doubt, wishes this ridiculous practice to be closed down in Muslim community and women to be more empowered against this offence.

As an Individual Muslim, I support the government to enact the law against triple talaq practice but the law, that has been introduced by the government and now passed in both the lower and upper Houses, does not address the core problems.

The Muslim Women (Protection of Rights on Marriage) Bill seems an attempt to criminalise Muslim men in the guise of protecting Muslim women.

This is why several activists, including those specifically devoted to women's rights, have released a statement condemning the government's attempt.

Now the people only hope President Ram Nath Kovind not to sign it into a law but soon they would get disappointed as it is certain that the President unquestionably would sign the Bill as he revealed his intention through his tweet just after the Bill got approval in Rajya Sabha.

He tweeted admiring the decision, "Passage in the Rajya Sabha of Muslim Women (Protection of Rights on Marriage) Bill completes Parliament's approval of ban on the inequitable practice of triple talaq.

A milestone in the quest for gender justice; a moment of satisfaction for the entire country." This is an evident proof that the Bill will get his assent without any hurdle to become an Act.

No notable change was made in the Bill while the arguments went on thrice in Parliament on the same topic. Oppositions' objections to amend the Bill remained unsolved and the repeated criticism of the Bill was given no attention.

The Opposition criticised how the Bill glosses over the actual process of providing justice to Muslim women.

They argue that imprisoning a husband leaves the complainant at the mercy of her maternal family. The government ignored that such a family could turn hostile towards the wife for complaining against the husband and putting him behind bars.

All the battle was about the women's empowerment and her protection but how she can feel empowered and protected living alone three years being not provided with maintenance.

This Bill neither addresses nor concerns itself with the financial security of the woman and her children.

The Triple Talaq Bill came at a time when the entire nation is alarmed at the daily barbaric acts of lynching of Muslims and Dalits.

In such circumstances, this Bill gives the impression of complete charade and it superseded all the core issues in the country.

This Bill became the first instance in free India where criminal provisions have been brought into matters of marriage and divorce which are avowedly civil matters.

This is really historical not as the government claims but in another way.