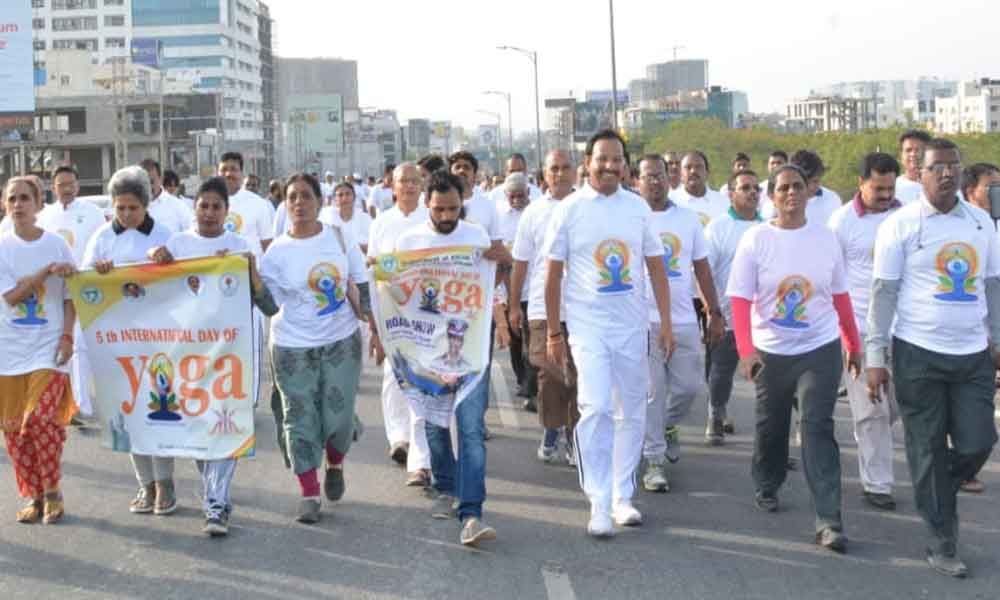 Speaking on the occasion, the Commissioner said that physical and mental ailments can be overcome by practising yoga regularly. He said that yoga can also help people in leading stress-free lives.

Cyberabad: As a curtain-raiser for the 5th International Yoga Day, a road show was organised by Telangana Ayush Department on Gachbowli flyover on Sunday morning. Cyberabad Police Commissioner VC Sajjannar participated in the road show as the chief guest. As part of road show, yoga exercises were performed, followed by yoga walk. Later, books and pamphlets related to yoga were launched.

Speaking on the occasion, the Commissioner said that physical and mental ailments can be overcome by practising yoga regularly. He said that yoga can also help people in leading stress-free lives. To lead happy, healthy lives, yoga should be practiced regularly, he urged the people, as along with meditation, yoga can lead to peaceful life. Regular practice of yoga also gives confidence to face any situation.

The Commissioner informed that the staff of Cyberate Police Commissionerate have been given training in yoga. He congratulated Ayush Director Dr Alugu Varshini for organising the beneficial programme.

Dr Varshini said the programme was organized as a curtain raiser on the International Yoga Day. She urged people to avail of the services of Ayush wellness centres. The Yoga Walk would be held from Charminar at 7 am on June 19 and another walk would be held on June 20 from Naturopathy College in Balkampet. Yoga awareness programme would be held at Gachibowli Stadium on June 25.