I am blessed with two families now, says Dinesh Jena 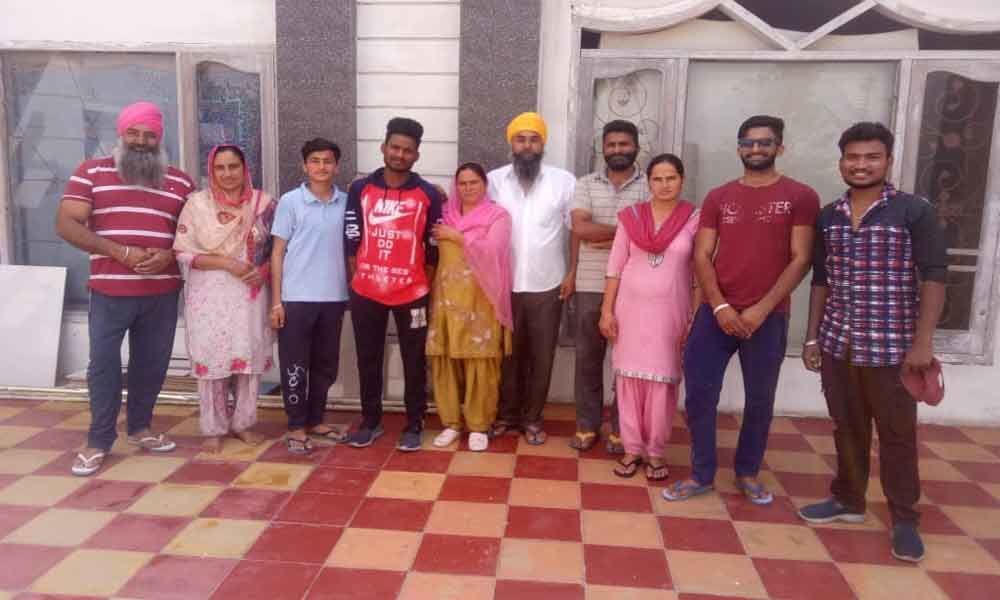 The day Dinesh started his return journey to Hyderabad from Rankala village in Amritsar. He is seen with the Punjabi family who took care of him for the past eight years
Highlights

It took me just an hour to decide to return said Debashis Dinesh Jena sitting in his house at Navodaya Nagar Colony in Moula Ali. Decisions are something that Dinesh takes without batting an eyelid. Just as he had left the city in a huff at the age of 13 over a small fight with his brother while playing cricket, his return too has been quick.

Hyderabad: It took me just an hour to decide to return said Debashis Dinesh Jena sitting in his house at Navodaya Nagar Colony in Moula Ali. Decisions are something that Dinesh takes without batting an eyelid. Just as he had left the city in a huff at the age of 13 over a small fight with his brother while playing cricket, his return too has been quick.

When the team from the police department led by inspector Jalender Reddy accompanied by constables Ashok and Ravinder Reddy met him in Rankala village in Amritsar district it took him just an hour to pack his bags. He says, "The feeling of reuniting with my family, especially with my mother was incredible."

Having just spent three days with the family here, every minute is an emotional saga for the now 21-year-old youth. Every emotion floods his thoughts of the time he had spent with the Punjabi family. "I get close to 20 calls from Harpreet Kaur and Sukhraj Singh who took care of me. Gurlal, a family member, who is in Class 4 is not eating food. I have two families now," says Dinesh.

After he had spent the last eight years under the care and love of Punjabi family, Dinesh is comfortable speaking Punjabi and Hindi. He can understand Telugu but is unable to speak. He says, "I understand but cannot speak Telugu." As far as food goes, Dinesh likes to eat rotis and his mother Susanna is making it a point to prepare what he likes. "I do miss my lassi," he says.

Family doesn't sell house, was hopeful of his return

We were in financial trouble and several times we thought of selling the house but the thought that my brother would come back kept us from disposing of the property, says Deepak, his elder brother who is a technician in a telecom company. Once in 2015, Dinesh did come up to the HB Colony junction which is a stone's throw from his house but did not garner courage to meet his family.

I want to go to Dubai

Dinesh has learnt to drive tractor and was planning to head to Dubai. He shares, "If my family had delayed by another six months, I would have been off to Dubai. I still want to go there as several Punjabis do. They either go to Dubai or Canada."

Dinesh's mother wants him to study but he says, "It would take me four to five years and I want to become financially independent. I was always harbouring the thought of going to Dubai and return to Hyderabad with lots of money and help my mother.

Dinesh says that people in the village do not study but just want to go abroad. When asked if he had ever been to a Gurudwara? He said, "I did go to Gurudwara a couple of times, but the family members never forced me to. We were like a family, Saath saath me roti khate the."

Two families to meet up

Sukhraj Singh and Harpreet Kaur invited the Jenas' to Amritsar and the latter are planning to visit later this month. Susanna, Dinesh's mother says, "I want to see the place where my son stayed for eight years. I am also grateful to the family who took care of m y son."

Even as we leave, the phone rings and Dinesh shoots of in chaste Punjabi enquiring about his KTM bike that he had recently bought. The caller asks when will you come back?