MIM gets nod to hold Jalsa at Mecca Masjid 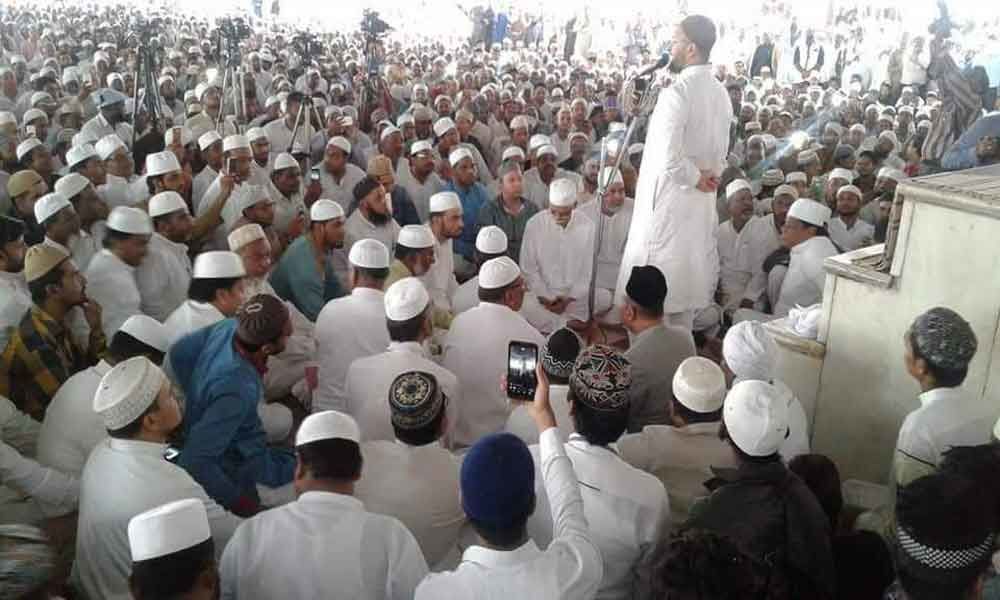 Alleging violation of Model Code of Conduct, the All India Sunni Ulema Board (AISUB) on Wednesday strongly condemned the decision of State government which accorded permission to AIMIM (All India Majlis-e-Ittehadul Muslimeen) for holding Jalsa-e-Youm-ul Quran on May 31 (the last Friday of this Ramzan).

Dabeerpura: Alleging violation of Model Code of Conduct, the All India Sunni Ulema Board (AISUB) on Wednesday strongly condemned the decision of State government which accorded permission to AIMIM (All India Majlis-e-Ittehadul Muslimeen) for holding Jalsa-e-Youm-ul Quran on May 31 (the last Friday of this Ramzan).

As per a government order, the Special Chief Secretary on Tuesday permitted MIM to conduct the annual programme following Friday prayers at Mecca Masjid. Following explanation from the Director, Minorities Welfare, the government after careful examination of the matter permitted AIMIM to organise Jalsa-e-Youmul Quran on May 31, 4th Friday of the holy month of Ramzan, at Mecca Masjid, the GO said.

In contrast, the Ulema Board says, the Minorities Welfare Department despite High Court asking it to consider their application for conducing did not consider their plea, even they are a 'non-political organisation.'

It may be mentioned here that the first three Fridays, MIM (Majlis Ittehad-ul-Muslimeen), All India Sunni Ulama Board (AISUB) and MBT (Majlis Bachao Tehreek) conduct public meetings under the name 'Jalsa-e-Youm-ul Quran' following Friday prayers in the afternoon.

MIM also gets the provision of conducting on the last Friday of the holy month. But due to the Model Code of Conduct, this activity is barred by the committee which reviews the matters related to the election code. Notwithstanding the decision, the AISUB citing their organisation's apolitical nature also approached the court recently. AISUB has been demanding that Secretary of Minorities Department issue the permission order in favour of Board for the last Friday (May 31) at Mecca Masjid keeping the tradition of last two decades. "The authorities are competent to deny permission for political parties for the meeting purpose in the mosque area, and oblige the election code," said Maulana Hamed Hussain Shuttari, Board's President.

Further, he cited that a writ petition was filed by the Board before Chief Justice and an interim order was passed to consider their application but there was no response from the officials. On the contrary, the permission was granted to MIM for conducting the programme despite the Model Code of Conduct being in force throughout the State, he pointed out.

Speaking to media persons at his office, Hamed Hussain said that his organisation remains a purely religious body, which functions only for religious purpose. "We started this programme after permission was granted during the year 2000, when Nara Chandrababu Naidu was the Chief Minister. Ever since on the 2nd Friday of each Ramzan, the Board has been conducting the programme while addressing Musallies (prayer attendants) after Namaz-e-Juma, in a peaceful manner," he added.

This year the government has not given the permission due to the Election Code. But it must answer why a political party like AIMIM has been given permission for the fourth Friday, undermining the same Code which was cited as the reason for rejection of permission for other organizations," he demanded.