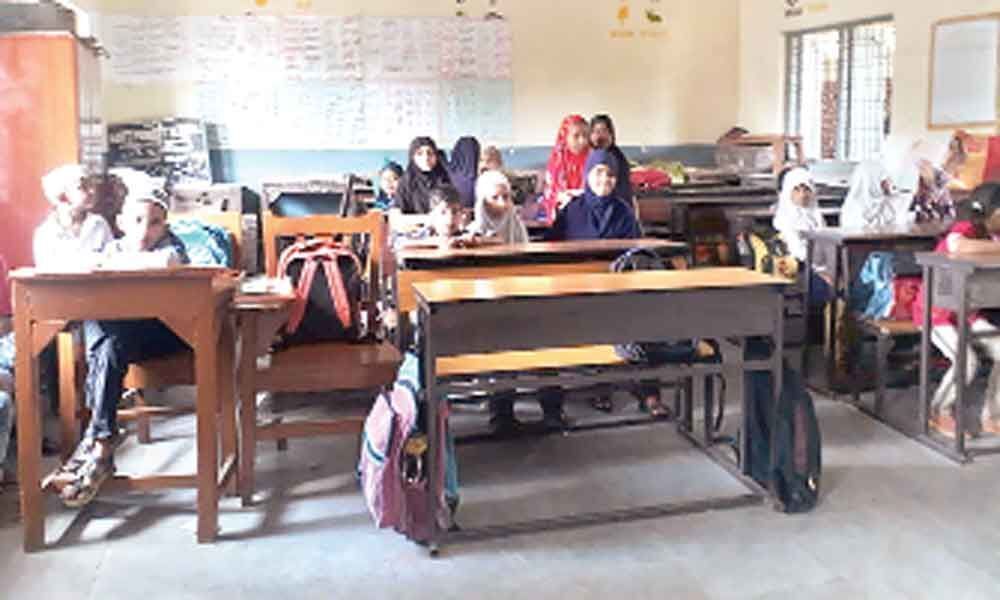 Though the building appears quite spacious from outside with a playground at the very entrance, the inner structure of building has little to boast of.

While a large portion is occupied by degree, junior college and high school sections, the remaining two primary sections get raw deal in allocation of space. One primary section is being run in just a single classroom with a strength of more than 60 students, while another primary section was pushed into a corner of verandah.

As a stark example of 'one size fits for all,' the Government Boys Primary School, Beroon Fateh Darwaza, is being run in just a single room. It is a whole school running under a single roof. Here, the students of three standards i.e. 3rd 4th and 5th are being taught together at the same time in the same classroom. One could understand the situation of another primary school which lies in a corner of verandah.

"Out of 63 enrolled students, barely 30 to 40 are attending the school. Due to crunch of space, local parents are not sending their wards to the school and there are increasing dropouts day by day. Only parents below poverty line, living near the school, are sending their children," said a teacher on condition of anonymity.

"Without ascertaining the feasibility and implications of moving the state-run schools into government's own buildings, the authorities are moving them one by one, resulting in chocking the space and making it difficult for them to operate properly. Will the parents send their children to school chocking in space and running in congested school rooms?" questioned Mohammed Imam Tahseen, a social worker.

"Given the prevailing conditions, it is impossible to encourage local people to send their children to the school when children of different standards are being taught in just single room. Observing the pathetic situation quite for a long time, I have written a letter to the DEO Hyderabad last month informing him about the prevailing situation in the school and the response is awaited," Tahseen added.