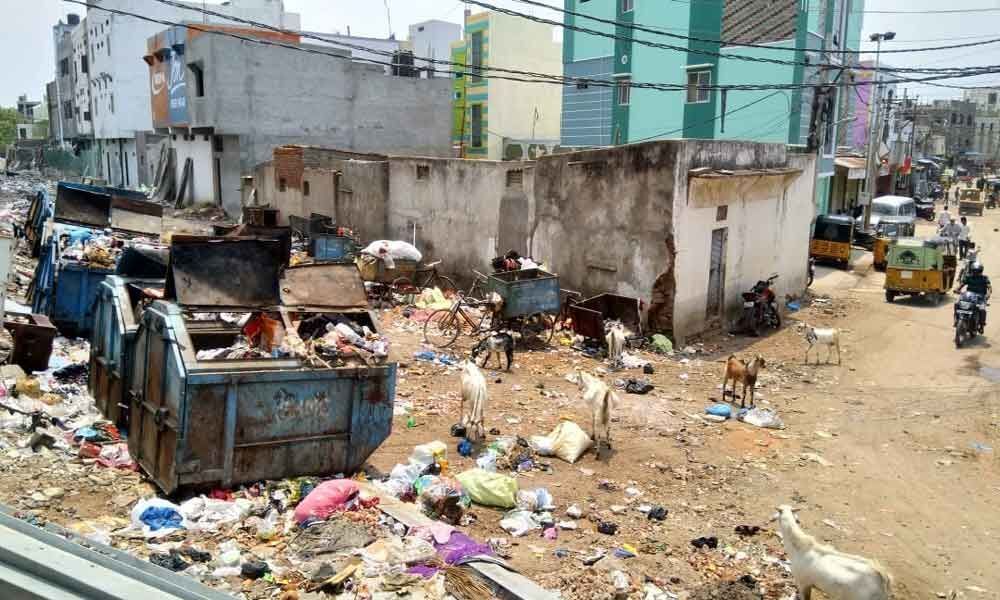 The street beside the railway track at Road no 1 in Talabkatta have been turned into a dumping yard.

Talabkatta: The street beside the railway track at Road no 1 in Talabkatta have been turned into a dumping yard. The total area is covered with a garbage and the road is blocked. It has been more than one month that the garbage lay on the road and no GHMC workers have paid interest to clean the site.

There are many houses in people live and they tired of complaining about the issue and no action is taken against this. There are five garbage boxes are seen and which all are full, and its nearby area is filled with huge garbage and the road is blocked as no place to pass through.

Mohammed Rehan, a resident, said, "The whole street is covered with garbage and for weeks no GHMC vehicle came to change the garbage box, there are five boxes kept and all are full and even the daily door-to-door garbage collector also dumbs the garbage here and by wind blows all dumb comes inside the house and don't know why GHMC is neglecting this street and not picking-up the garbage,"

"Overflowing garbage bin is common for us, garbage trucks won't come for weeks here, so we residents are forced to bear with this," he added. While door-to-door garbage collection in the prime areas is done regularly, but the slums are still having garbage bins to dispose waste, said Abdul Rahman.

While foul smell is formed, and it also has become a ground for dogs and other animals which come here in search of food. It is causing us danger and became hazardous while there are many small children living here, said Amina Begum, another resident.

Another resident Shafiddin said, "Due to dumping of garbage, there also increase in a mosquito population, we residents give regular complaints to the local corporator and to MLA when they had come for campaigning they ensure us to clean the garbage but since the elections were over and it has to be clean soon."