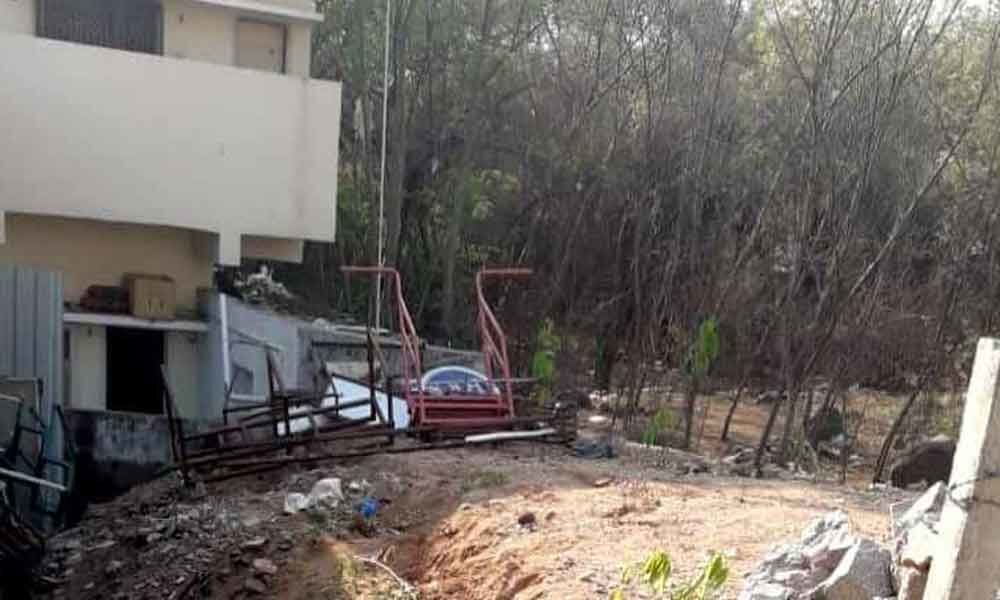 The residents of Sanjeev Nagar Housing Colony at Mahendra Hills, Secunderabad, have alleged that the workmen of Ramakrishna, the vice-president of Secunderabad Cantonment Board (SCB), uprooted 25 fully grown Ashoka plants and dumped some fabricating materials in the park no. 4 on Tuesday.

Secunderabad: The residents of Sanjeev Nagar Housing Colony at Mahendra Hills, Secunderabad, have alleged that the workmen of Ramakrishna, the vice-president of Secunderabad Cantonment Board (SCB), uprooted 25 fully grown Ashoka plants and dumped some fabricating materials in the park no. 4 on Tuesday.

The rift between Sanjeev Nagar Housing Colony and the SCB vice-president has come to the forefront again. Last year a complaint to SCB CEO Chandra Sekhar urged him to protect the park and demolish the encroachments there. But every time an encroachment is removed by SCB, it has failed to take action against the accused, allege the residents.

"As SCB has failed to protect our park, so we had approached the court in March and also a writ petition was sent to the higher authorities about this issue and the case is pending in court. There is the protection order by the court to SCB to protect our park," says Naresh Bandi, the Sanjeev Nagar Housing Colony association treasurer.

He further said they are 82 plots in the 40% of layout land, and they are four parks in the colony. The park no.4 is adjacent to Seshachala Colony. With help of fake documents, the SCB vice-president is trying to grab a portion of park. Because of the added advantage of his post, no action is being taken against him by the board, say locals.

When contacted, Ramakrishna said that the board had carried out a survey in the park and also removed the encroachment, but the residents of Sanjeev Nagar Housing Colony were not pleased by the action and approached the court. The court had given an order to the SCB to protect the park, so temporary fencing had been done to protect the park and the officials also earmarked the land, he clarified. He also said the entire matter is solved.

As the residents of this colony had sent a writ petition to several higher authorities, the CEO of SCB had also made a proper survey and earmarked the land based on the layouts and records available with them. He said that a politically motivated game was going on. "Everything is sorted but the colony people are complicating the matter," he alleged.