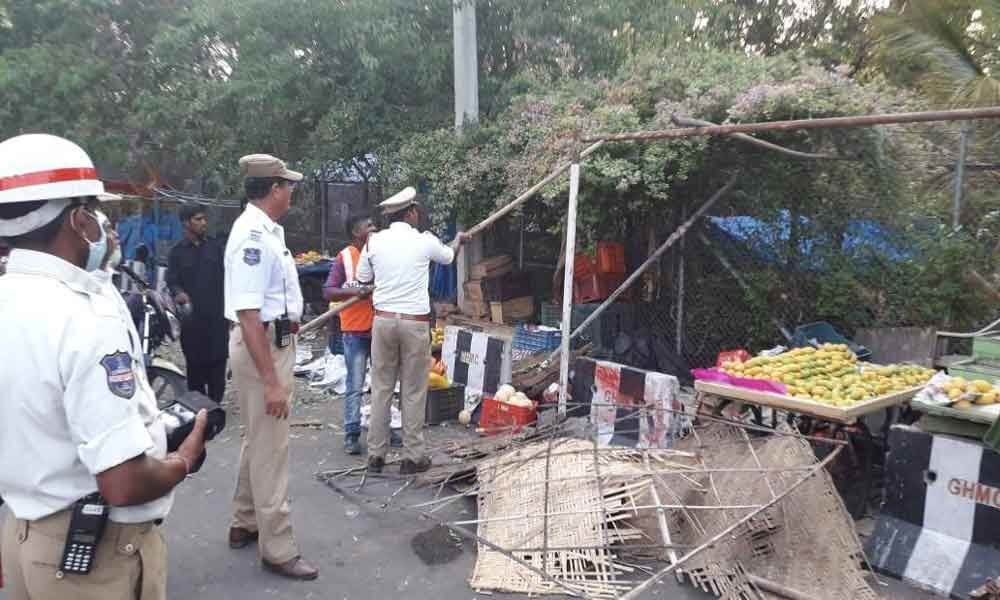 Roadside encroachments which spread all along the 1.5 kilometer stretch between Phislabanda and Chandrayangutta were removed by the authorities. Following complaints, some 40 cases were also booked against the stall owners.

Chandrayangutta: Roadside encroachments which spread all along the 1.5 kilometer stretch between Phislabanda and Chandrayangutta were removed by the authorities. Following complaints, some 40 cases were also booked against the stall owners.

The Falaknuma Traffic Police held special drive against footpath encroachment which in the recent years has transformed into a kind of market place functioning even till mid-night hours. All kinds of stalls selling clothes, accessories, footwear, fruits, vegetable, fish and other items were being sold at cheaper rates for the public.

Besides around 50 fixed stalls, roadside vendors operating pushcarts were seen standing on road starting from Chandrayangutta to Phisalbanda on DRDL road, which is considered to be high security zone.Most of the stalls were seen present exactly on the opposite side of the DRDL Missile Complex, named after former President, Dr APJ Abdul Kalam.

The area being a under high security zone, these stalls running day and night are considered security risk. Moreover, some of the vendors have come up with fixed installations and made their shops look like permanent structures and encroached bigger spaces on the edge of the road, which are actually meant for walking. Negligence of GHMC and other departments concerned is blamed for encroachments on the stretch.

Though it is a National Highway (NH-7), which connects to Vijayawada and Bangalore, some of the accidents which took place on the stretch are blamed on these encroachments, which have come up in the recent years. On an average, an accident takes place every day here.

Speaking about these stalls, local residents of Rakhshapuram, Baba Nagar and nearby area said that these stalls had been causing disturbance, as the customers park their vehicles on roads causing traffic snarls. "Some of these stall owners does not behave well with the customers. Complaints have been lodged in Kanchanbagh Police Station and Falaknuma Traffic Police against them, but no action has been taken.

Even after demolishing these stalls twice of thrice a year, they reappear again within in 2-3 days. Many accidents have occurred on the stretch. Unmindful of the traffic and speed of vehicles, scores of fruit vendors also try to cross this National Highway even during midnights, risking not only their lives but also others," said Shaik Ahmed, a resident.

Owing to the brisk business where not only fruits but clothes, accessories and other items are sold on roadside, this gives an impression of roadside exhibition which attracts passers-by and causes regular traffic problem.

Falakunuma Traffic Inspector Ch Narender Rao said that a special drive was conducted on Monday against the footpath encroachment in area. "We removed all the permanent stalls and 40 cases were also booked against them. All the stall owners were warned not to fix the stalls again at this spot."

"Now we residents hope that these stalls do not reappear on the stretch. It's easy for us that we get to purchase everything here, but more importantly it's a NH-7 and it's also a defence area which has a high security. This kind of stalls could be a security risk and do not befit the prestigious defence building," said Mohammed Muzammil, a resident.