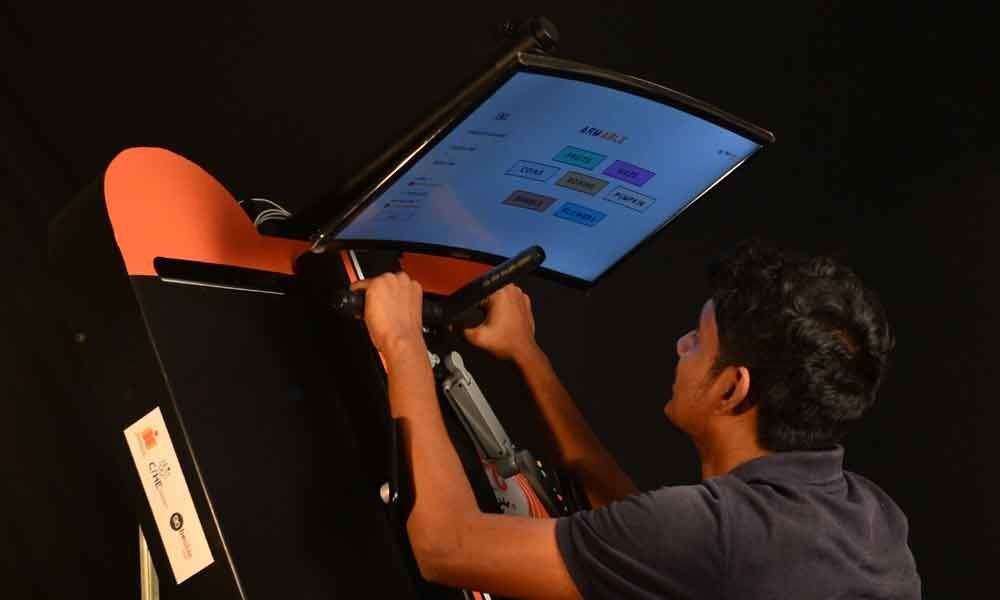 The Indian Institute of Technology Hyderabad (IIT-H) incubated startup BeAble health which came up with a device to aid the brain and motor rehabilitation of stroke victims named ‘ArmAble’.

Hyderabad: The Indian Institute of Technology Hyderabad (IIT-H) incubated startup BeAble health which came up with a device to aid the brain and motor rehabilitation of stroke victims named 'ArmAble'.

The 'gamified arm rehabilitation' device allows the patient to play interactive games as a part of their therapy offering the victim a game based therapy the device has data-based quantified progress and recovery and can be used for telerehabilitation.

The device aims at targeting conditions such as cerebral palsy, multiple sclerosis, traumatic brain injury, fracture and frozen shoulder and claims to solve the pressing need for intensive, engaging and regular rehabilitation for the upper limb.

"Being a bio-medical engineer, I was already engaged in contributing to the rehabilitation sector during my bachelors and master days. Later I got an opportunity for a one-year fellowship programme at IIT-Hyderabad in the year 2016-2017 where we spent a lot of time in hospitals and observe a lot of things about the difficulties the doctors, patients, and their attendants face. After taking those observations we try to understand their problems and find out their actual needs.

During this time, we came across a lot of stroke victims and realised how difficult it was for them to move their hands and what was the impact on them and their families. After doing the research for quite a long time and rectifying the problems like they have to travel till physiotherapy clinic, they are not motivated to do therapy and they drop out of therapy.

As engineers, we are trained to solve the problem immediately without understanding the depth of the problem. But in this case, we understood a lot of things around it and then we started solving the problems. This process took us around eight to ten months," shared Habib Ali, founder & CEO, BeAble Health.

"We took alternative feedback of patients and their families and understood their needs and came up with an initial concept. We got incubated in CfHE of IIT-Hyderabad where I was doing my fellowship of one year.

CfHE Fellowship is a unique world-class program of one year for healthcare entrepreneurs followed by an opportunity to incubate. It is conceptualized, administered and mentored by Bay area entrepreneurs, top academics from the US, Indian and Bio-med industry.

After presenting the idea we got incubated and started our company and started building the solution. Initially, we took it to clinics where we had around 10 to 12 who used our device, and when they used it we got a lot of inputs from the user and the physiotherapist which helped us a lot to go back and modify the device," added Habib.

The Biotechnology Industry Research Assistance Council (BIRAC) granted them a funding scheme called Biotechnology Ignition Grant (BIG) in August 2017. The company started in November 2017 and till now around 12 users are impacted with the device and 120 hours of therapy has been taken in which there are 72,358 repetitions have been covered.

The device is like a table which can be adjusted as per its height, depending on the patient's situation then the table has a handle which the patient has to hold. It it has straps as well for the patients who have lost gripping power due to a stroke. The unique part of this device is the gaming interactive screen in front of the table where the patient can play games as part of this therapy.

"There are some devices in the market which has games but the people don't understand it, so we started designing games which help people understand what is to be done.

When the patient starts playing he gets too involved and interested in the game because to recover from a stroke the brain needs a lot of training and sometimes the patient isn't interested or demotivated to do so. In this time the game therapy will help him he can enjoy playing games as well as get treated," said Habib.

"We want the device to be bought by the hospitals and rehabilitation centers not by the patient because the end user is the patient and it should be cheap for him. The patients can also rent it for a specific amount of time and money until his therapy is in process.

People are already were stressed because of the strokes and the expenses, we didn't want them to bother about one more the thing we wanted to keep it affordable and accessible to everyone from rich to poor," added Habib