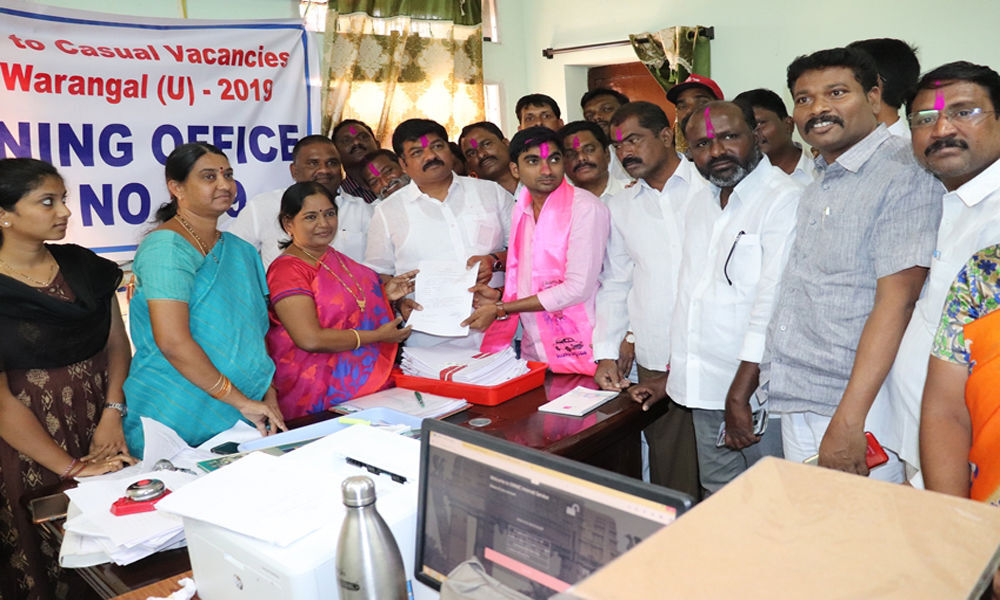 Speaking to media persons after the returning officer declared the result, Narender thanked all the candidates for supporting the TRS candidate got elected unanimously.

Warangal: In what is termed as an anticlimax, as many as 14 candidates in the fray for the by-poll to the 19th Division of the Greater Warangal Municipal Corporation (GWMC) withdrew their nomination here on Friday, leaving Diddi Nagaraju of the Telangana Rashtra Samithi (TRS) elected unopposed. For the first time in the history of GWMC, an election to a division ended on a unanimous note.

Returning officer Usha Dayal announced Diddi Nagaraju winner after other candidates withdrew their nominations. It may be mentioned here that 15 candidates were in the contest after the completion of the scrutiny of nomination papers on Thursday. Although four candidates from TRS, five from BJP, one each from Congress, Telugu Desam and Aam Admi Party filed their papers, barring Congress' Pagadala Satheesh, no other submitted B-form. This apart, three independent candidates were also in the poll fray.

Against this backdrop, 14 candidates withdrew their papers in favour of Diddi Nagaraju who had the support of Warangal East MLA Nannapuneni Narender. Surprisingly, Congress candidate Pagadala Satheesh not only withdrew his nomination but also joined the TRS. It may be recalled that the by-election to 19th division was necessitated due to the resignation of Nannapuneni Narender after he was elected from Warangal East constituency.

Speaking to media persons after the returning officer declared the result, Narender thanked all the candidates for supporting the TRS candidate got elected unanimously.