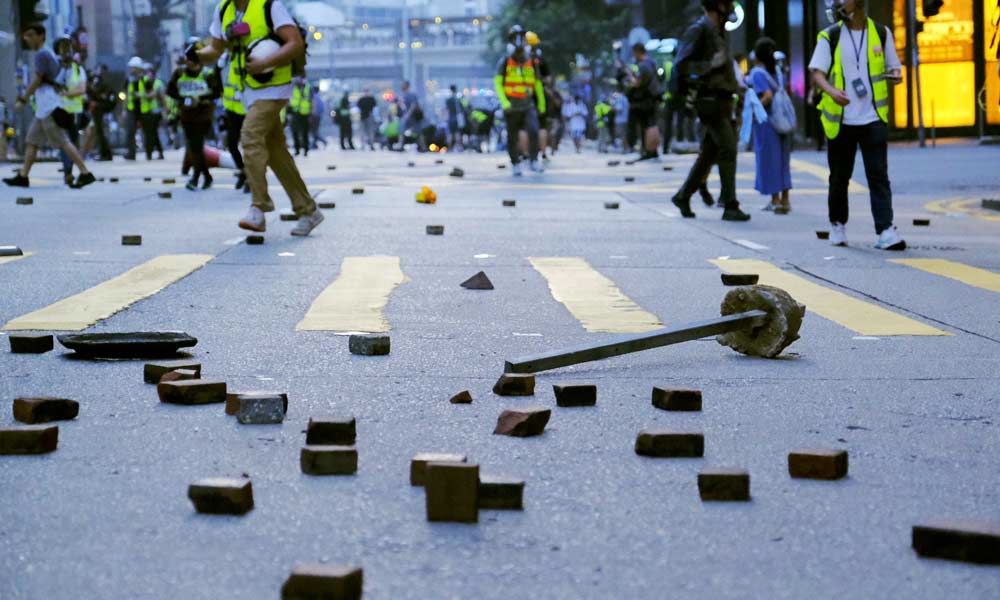 Chinese authorities on Tuesday expressed their opposition to a Hong Kong High court ruling against a law banning face masks during the ongoing...

Beijing: Chinese authorities on Tuesday expressed their opposition to a Hong Kong High court ruling against a law banning face masks during the ongoing anti-government protests that have rocked the city since June.

Zang Tiewei, the spokesperson for China's legal affairs commission, said several mainland Chinese lawmakers expressed "strong dissatisfaction" over the court's decision taken on Monday and that it could yet be overturned by the mainland Parliament, reports Efe news.

Zang said only mainland China's permanent parliamentary body can judge whether a Hong Kong law is in conformity with Hong Kong's constitution.

The Hong Kong government used the Emergency Regulations Ordinance last month - which dates back to the British colonial-era and has not been used since 1967 - to impose a ban on wearing masks during protests as a bid to quell protests.

Parliament's legal committee claimed the ban, derived from the emergency regulations, was in accordance with Basic Law, contrary to the Court's decision.

Zang denounced the decision, saying it "seriously undermined" the power of the Hong Kong Chief Executive Carrie Lam and her government, and that they were "studying relevant opinions and suggestions" from other parliament deputies.

City authorities also spoke on the issue through a statement by the Hong Kong and Macao state council affairs office.

The office's spokesperson Yang Guang said the anti-mask law played a positive role in the prevention of violence and disorder.

Yang said the court's ruling was "a blatant challenge to the authority of (Parliament's permanent body) and to the power vested in the Chief Executive (Lam) by law to govern".

The spokesperson added that Beijing was closely monitoring the situation, and hoped the Hong Kong government and the judiciary would perform their duties strictly in accordance with the island's Basic Law to end violence and chaos and restore order.

While the court ruling stated the ban went against the city's Basic Law, it also acknowledged police had the right to ask people to identify themselves and could ask them to remove their masks to verify their identities.

The law has not yet been invalidated, and a hearing is scheduled for Wednesday to clarify the ruling.

Under the government ban, those found wearing masks at demonstrations faced up to one year in prison and fines of up to HK$25,000 (nearly $3,200).

However, the 106-page ruling recognizes police's right to ask people to remove their masks and adds that refusal to do so could lead to six months in prison or an HK$10,000 ($1,275) fine.

Until November 7, police had arrested 247 men and 120 women on suspicion of having violated the mask ban, and 24 were being tried, according to local press.

The controversial law seeks to force protesters to stop wearing masks as a way to hide their identities and thereby speed up police efforts to arrest violent protesters.

Many protesters have been used handkerchiefs and Guy Fawkes masks to cover their faces.