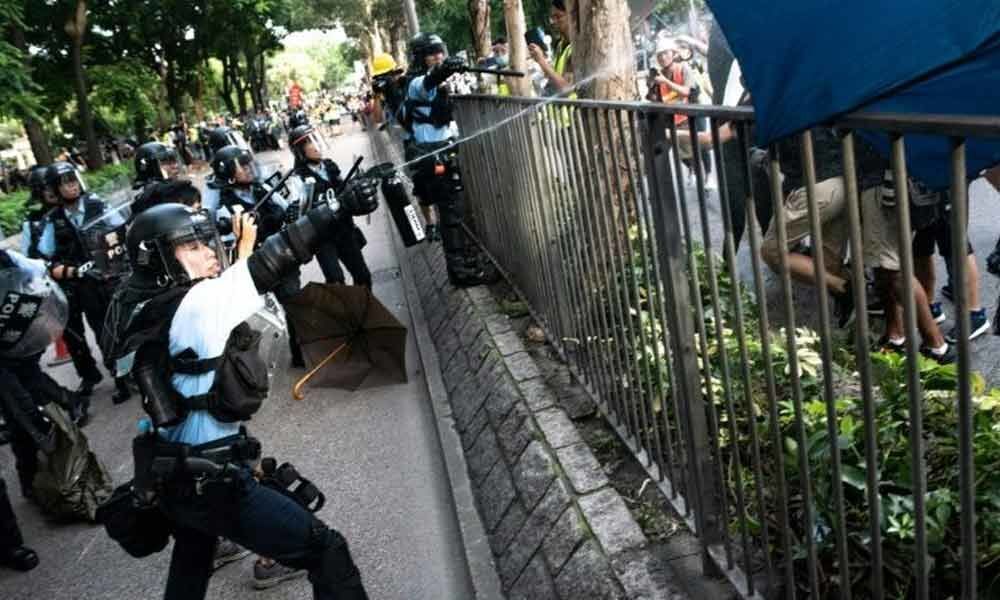 Clashes broke out between police and Hong Kong demonstrators Saturday as the latest anti-government protests took aim at traders coming across the border from mainland China.

Hong Kong: Clashes broke out between police and Hong Kong demonstrators Saturday as the latest anti-government protests took aim at traders coming across the border from mainland China.

Police used pepper spray and batons against masked protesters in Sheung Shui, a town near the border with China, after thousands marched to complain about "parallel traders". Sheung Shui boasts dozens of pharmacies and cosmetic stores that are hugely popular with mainland merchants who snap up goods in Hong Kong -- where there is no sales tax -- and resell them across the border. Protesters used bottled water to clean their eyes of pepper spray while one demonstrator was bleeding from a head wound, an AFP reporter said.

While parallel traders bring business to regions near the border, they are also a source of tension for locals. "It's really annoying. The rent has gone higher. Other small shops and restaurants can't survive. The whole region has become a place serving for parallel traders instead of local residents," protester Siu Hok-yan, 74, told AFP. Most of the shops in Sheung Shui were shuttered ahead of the protests, with protesters forcing the few still open to close, images broadcast by local media showed.

In a statement late Saturday police said they deployed force after protesters began arguing with locals and "attempted to charge at police officers when the officers intervened." Protesters accused police of charging without warning. Hong Kong has been rocked by a month of huge peaceful protests as well as a series of separate violent confrontations with police sparked by a law that would have allowed extraditions to mainland China.

Last month its parliament was trashed by hundreds of masked, youth-led protesters in unprecedented scenes. The bill has since been postponed but that has done little to quell public anger which has evolved into a wider movement calling for democratic reforms, universal suffrage and a halt to sliding freedoms in the semi-autonomous hub. Protesters are also demanding the bill be scrapped entirely, an independent inquiry into police use of tear gas and rubber bullets, an amnesty for those arrested and for the city's unelected leader Carrie Lam to step down.

Beijing has thrown its full support behind Lam, calling on Hong Kong police to pursue anyone involved in the parliament storming and other clashes. In recent years there has been a backlash against the influx of mainland tourists and immigrants, with more hardcore protesters describing them in derogatory terms such as "locusts". Some one million mainlanders have moved to Hong Kong since its 1997 handover, a flashpoint issue in the notoriously overcrowded city which already boasts one of the world's most expensive property markets.