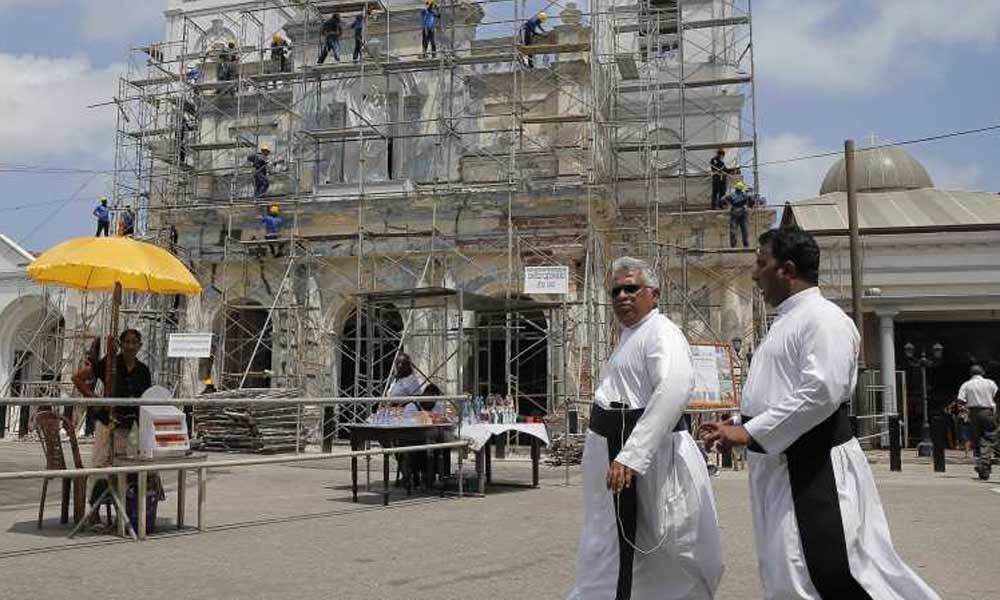 The Muslim politicians also protested what they term the government's inability to ensure the safety of their community which constitute 9 per cent of the island's 21 million population.

COLOMBO: Nine Muslim ministers and two provincial governors from the minority community resigned Monday to allow the Sri Lankan government to investigate allegations against some of them on links to an Islamist extremist group blamed for the deadly Easter suicide bombings.

The Muslim politicians also protested what they term the government's inability to ensure the safety of their community which constitute 9 per cent of the island's 21 million population. There are 19 Muslims lawmakers in the 225-member Parliament and nine of them held Cabinet, state and deputy ministerial positions.

"Until security of the people is ensured and until investigations are done by the police's Crime Investigations Department (CID) is finalised we will stay as government backbenchers," Rauff Hakeem, a lawmaker for Sri Lanka Muslim Congress, told reporters.

Their resignations came four days after thousands of people, including majority Buddhist community monks, launched a protest in the pilgrim city of Kandy, demanding the expulsion of three Muslim leaders whom they alleged were linked to the National Thowheeth Jamaath (NTJ) - the banned outfit blamed for the attacks on three Colombo hotels and three churches.

Following the April 21 attacks that claimed 258 lives, some Muslim politicians representing the government came under criticism for their alleged support extended to the rising Muslim militancy.

Industry and Commerce Minister Rishath Bathiyutheen was accused of supporting the ISIS-linked NTJ. The Sinhala majority nationalists were demanding the sacking of Bathiyutheen. The Opposition moved a motion of no confidence in the Parliament against Bathiyutheen, who has denied links to the NTJ and its terror activities.

In the wake of the bombings, majority Sinhala community mobs attacked Muslim-owned properties in towns north of the capital killing one Muslim man and leaving hundreds of homes, shops and mosques vandalised.

"We took this decision (to resign) as a responsible community who is keen on ensuring reconciliation and peace in the country," said Kabir Hashim, a senior minister.

He said that police must hold a proper inquiry and punish anyone if the terror group had been supported by them. Western Province Governor Azath Salley and Eastern Province Governor MALM Hisbullah, handed over their resignation letters to President Maithripala Sirisena in response to protests by the Buddhist monks, officials said.

Salley and Hisbullah, both Muslim allies of Sirisena and appointed by him, were under pressure to resign after being accused of being linked to extremism.

Both Salley and Hisbullah have rejected the allegations. Buddhist monk Athuraliye Rathana, who is also a parliamentarian from a Sirisena allied party, staged a hunger strike in the central town of Kandy near the foremost Buddhist shrine, the Temple of Tooth.

"I will end my fast only after the president will sack the two Muslim governors," Rathana said at the commencement of his protest. A crowd of about 10,000 Buddhists held a demonstration at the famous temple on Monday morning raising anti-Muslim slogans. Firebrand monk Galagodaaththe Gnanasara, released from jail on a presidential pardon last month, was also present.

Gnanasara has long been accused of instigating hate crimes against Muslims. The head of the Catholic Church in Colombo, Cardinal Malcolm Ranjith, also travelled to Kandy on Monday to express solidarity with Rathana. Shops and offices remained closed in the city, 115 kilometres east of Colombo, while black flags were raised in support of Rathana.