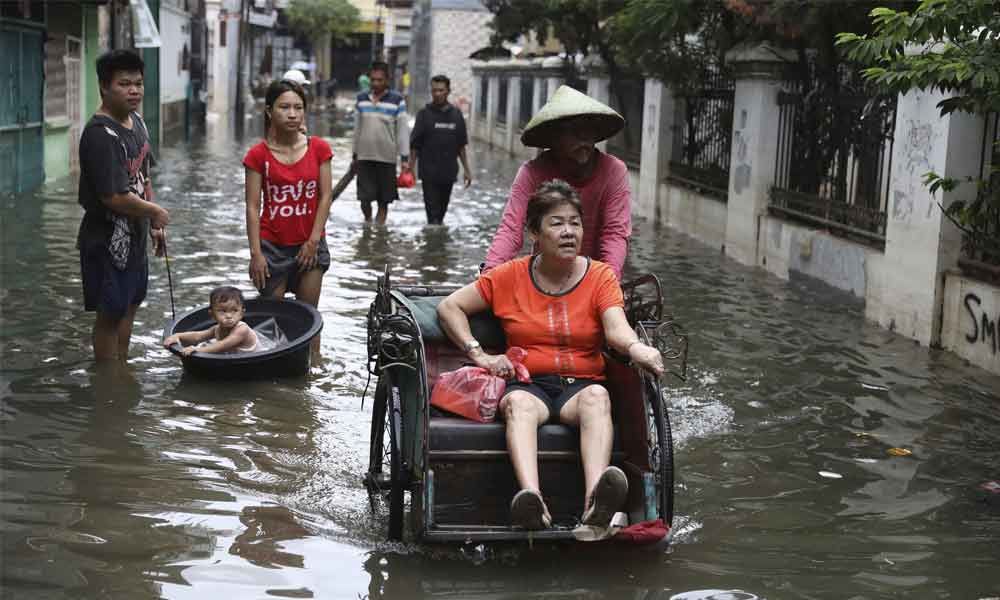 Tens of thousands of Indonesians were crammed in emergency shelters Saturday waiting for floodwaters to recede in and around the capital, Jakarta, as...

Jakarta : Tens of thousands of Indonesians were crammed in emergency shelters Saturday waiting for floodwaters to recede in and around the capital, Jakarta, as the death toll from massive New Year's flooding reached 47, officials said.

Monsoon rains and rising rivers submerged a dozen districts in greater Jakarta and caused landslides in the Bogor and Depok districts on the city's outskirts as well as in neighboring Lebak, which buried a dozen people.

Three elderly people died of hypothermia. It was the worst flooding since 2007, when 80 people were killed over 10 days.

"The waters came very fast, suddenly everything in my house was swept away," said Dian Puspitasari, a mother of 2, who looked overwhelmed trying to sweep piles of mud out of her home.

"To clean up this thick mud is another disaster for us." Four days after the region of 30 million people was struck by flashfloods, waters have receded in many middle-class districts, but conditions remained grim in narrow riverside alleys where the city's poor live.

At the peak of the flooding, about 397,000 people sought refuge in shelters across the greater metropolitan area as floodwaters reached up to 6 meters (19 feet) in some places, Wibowo said.

Data released by his agency showed some 173,000 people were still unable to return home, mostly in the hardest-hit area of Bekasi.

More than 152,000 people remain crammed at 98 emergency shelters with sufficient supplies in Jakarta's satellite city of Bekasi, where rivers burst their banks.

Much of the city was still submerged in muddy waters up to 2 meters (6.5 feet) high, according to the agency.

Kajol's tips on how to spend time amid lockdown impresses Madhuri
We use cookies for analytics, advertising and to improve our site. You agree to our use of cookies by continuing to use our site. To know more, see our Cookie Policy and Cookie Settings.Ok