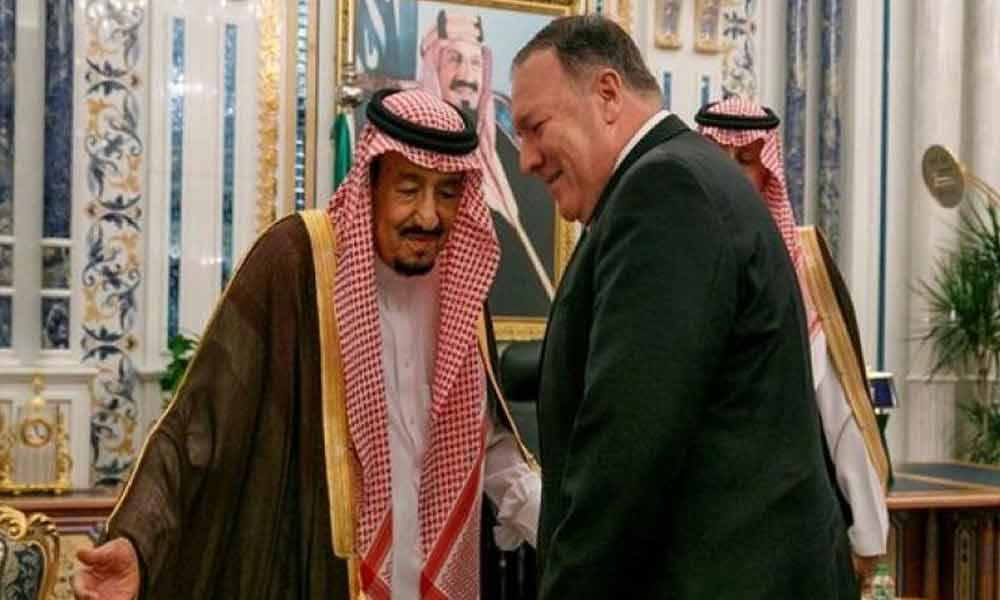 Pompeo had later said in a tweet that he had a 'productive meeting' with the Saudi King.

When asked by the travelling press whether the issue of Khashoggi had come up during talks, the official said, "It did not," adding, "The meeting with the King was brief."

The official could not confirm if the case had been raised with Saudi Crown Prince Mohammed bin Salman (MBS), whom Pompeo met later, CNN reported.

"The Secretary, the King, and the Crown Prince discussed the heightened tensions in the region and the need for stronger maritime security to promote freedom of navigation in the Strait of Hormuz. They also agreed on the importance of working together with the Gulf Cooperation Council to counter the Iranian threat throughout the region and to hold the Iranian regime accountable for its malign behaviour," State Department press secretary Morgan Ortagus said in a statement.

During Monday's meeting, King Salman told Pompeo that he was a "dear friend", Al Jazeera reported.

Pompeo had later said in a tweet that he had a "productive meeting" with the Saudi King.

Pompeo's visit to Saudi Arabia comes less than a week after the UN special rapporteur on extrajudicial executions, Agnes Callamard, accused Saudi Arabia of a "deliberate, premeditated execution" and said that the Crown Prince should be investigated for it.

Khashoggi died after entering the Saudi Consulate in Istanbul in October 2018. Riyadh initially denied any knowledge of the incident, but Saudi officials later claimed that many among the group, who murdered the former Washington Post columnist, belonged to the Crown Prince's inner circle.

In an interview on Sunday, US President Donald Trump reportedly said that Khashoggi's killing has been "heavily investigated", however the President declined to commit to ordering the FBI to investigate the murder.

The Trump administration has come under fire from the US Congress over its handling of the country's relationship with Saudi Arabia in the wake of the murder of Khashoggi, as well as in the face of the mounting death toll in the Saudi-UAE war in Yemen