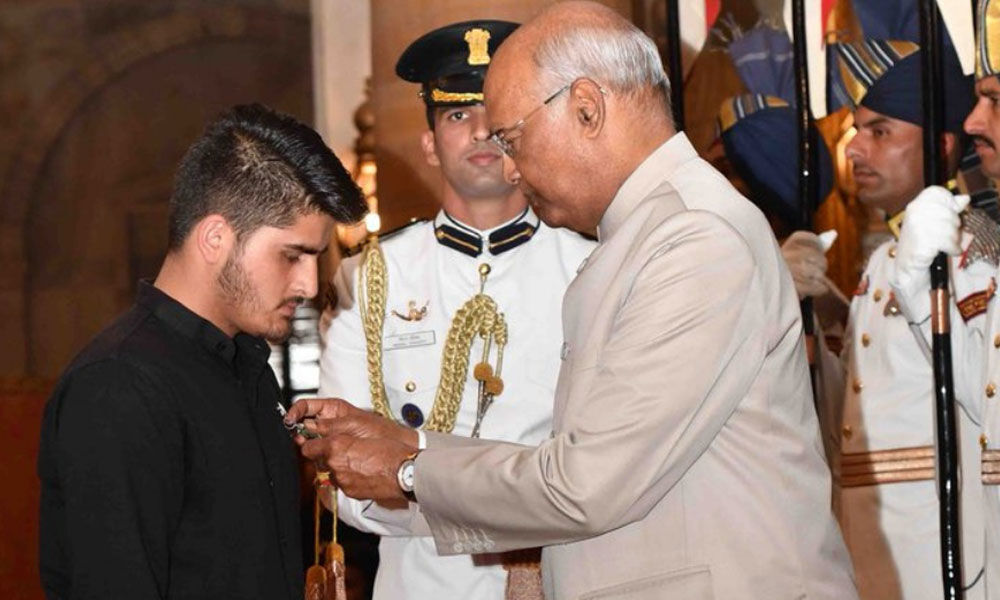 In one of the rare occasions, President Ram Nath Kovind on Tuesday awarded Shaurya Chakra to 16-year-old Irfan Ramzan Sheikh for fighting militants who attacked his residence in Shopian district of Jammu and Kashmir.

NEW DEHI: In one of the rare occasions, President Ram Nath Kovind on Tuesday awarded Shaurya Chakra to 16-year-old Irfan Ramzan Sheikh for fighting militants who attacked his residence in Shopian district of Jammu and Kashmir.

Shaurya Chakra is usually awarded to armed forces and para-military personnel for "gallantry otherwise in the face of the enemy".

During the intervening night of October 16-17 of 2017, militants cordoned off the house of Sheikh.

His father Mohammad Ramzan was an ex-sarpanch with affiliations to the People's Democratic Party (PDP).

When Sheikh, the eldest son of Mohammad Ramzan, opened the door, he found three militants in the verandah of the house armed with rifles and grenades.

"Sensing that the militants could harm his family, he exhibited the highest degree of courage and faced the militants for sometime so as to avoid their entry inside the house.

In meantime, his father came out and the militants pounced on him, resulting in scuffle," the citation for the award read.

Sheikh did not think for a moment for his own safety and pounced upon the militants for safeguarding the life of his father and other family members, it read.

He later succumbed. However, Sheikh did not lose courage and continued to engage in scuffle with one of the militants, who resorted to indiscriminate firing resulting in severe injuries to the militant as well.

On seeing one of their associates injured, the militants tried to flee. However, Sheikh chased them and they left the body of their fellow militant behind.

"Irfan Ramzan Sheikh exhibited the extraordinary show of bravery and maturity in such a small age," the citation read.