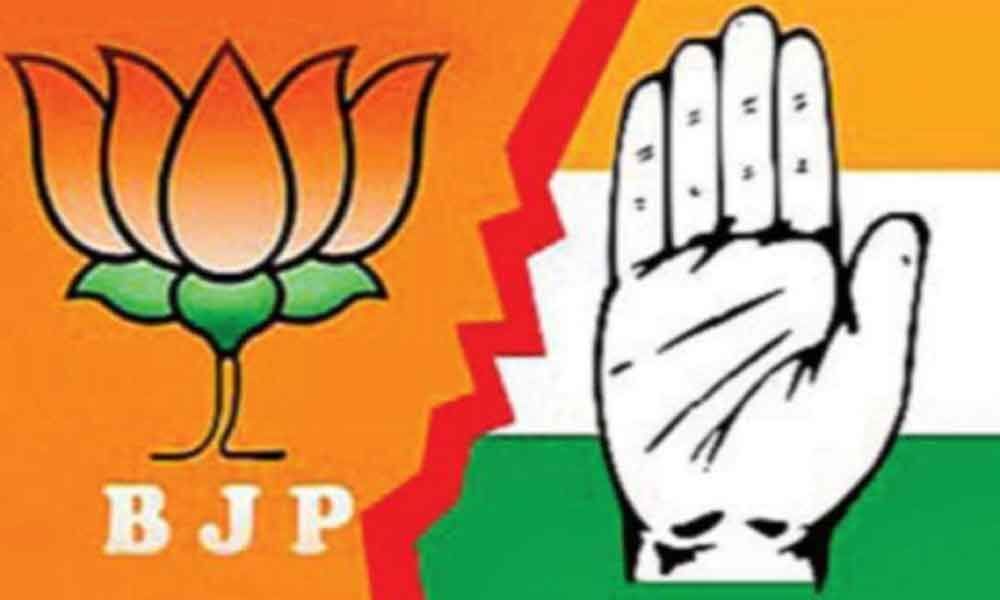 The BJP is making a determined bid to wrest Maharashtra's Nanded Lok Sabha seat, a citadel of the Congress from where its state president and former chief minister Ashok Chavan is seeking re-election.

Nanded:The BJP is making a determined bid to wrest Maharashtra's Nanded Lok Sabha seat, a citadel of the Congress from where its state president and former chief minister Ashok Chavan is seeking a re-election.

Nanded, located in Marathwada region, is one the two seats that the Congress managed to win out of the total 48 constituencies in the state in the 2014 Lok Sabha polls, when it faced a drubbing at the hands of the BJP.

Chavan, the sitting MP from Nanded, is pitted against BJP's Pratap Chikhalikar, who is his staunch rival and currently an MLA from Loha seat in Latur district.

Both of them hail from the Maratha community and are trying their best to woo voters in the constituency.

Talking to PTI, Chikhalikar said, "Fortunately or unfortunately, I have been part of all the major parties."

However, in 2004, he left the party over differences with Chavan and contested as an Independent, but supported the Vilasrao Deshmukh-led Congress government in the state.

However, in 2009, he was defeated in the state polls by the Congress and joined the NCP. Later, in 2014, he won the Loha Assembly seat on Shiv Sena's ticket, but recently joined the BJP.

He said the BJP was making a strong pitch to wrest the Nanded Lok Sabha seat and send across a message that a former chief minister and Congress state head can be defeated.

Chikhalikar said the BJP fielded him against Chavan as he is a ground-level worker and "always available for people".

He claimed Chavan did not work for the constituency's development.

"When Chavan was the chief minister, Nanded did not benefit in anyway. There was no new industry. In the last five years, his performance has been zero," he said.

He also claimed that the Nanded Municipal Corporation, where the Congress has absolute majority, is the "most undeveloped" civic body.

In 2009, Chavan's brother-in-law Bhaskarrao Patil Khatgaonkar was the Congress MP from Nanded. He later switched over to the BJP during the 2014 Lok Sabha elections.

Congress MLAD P Sawant, a close aide of Chavan who is handling his poll campaign, downplayed the criticism, saying political rivals are bound to do so.

He said the infrastructure inNanded developed immensely since the time Chavan was industries minister in the Vilasrao Deshmukh-led state government.

"Latur and Nanded airports were constructed in 2004-05 and today, both have night landingfacility. There are daily flights from here to Mumbai and Hyderabad. Besides, there are direct flights to Delhi, Amritsar and Chandigarh," he said.

Sawant also said that there was nothing substantial in Prime Minister Modi's public address in Nanded last week.

Chavan made his Lok Sabha debut in 1987 when he won a by-election against Dalit leader Prakash Ambedkar in Nanded after his father Shankarrao Chavan, who was then Union finance minister and MP from the seat, was made the state's chief minister.

However, in 1989, Ashok Chavan lost the seat to a JanataDal candidate and then became active in state politics and contested Assembly polls from Nanded.

Though Nanded has always been a Congress bastion, the party lost the seat in 1989 and later in 2004.

The constituency was wrested by the Congress in 2009 and the party managed to retain it in 2014.

There are 17,19,247 voters in the constituency, where 14 candidates are in fray for the upcoming Lok Sabha poll.

The constituency has Marathas, Lingayats, Dalits and also a sizable number of Muslim voters.

Ashok Chavan's wife is an MLA from Bhokar, while Sawant is a legislator from Nanded-North.

Nanded will go to polls in the second phase on April 18.