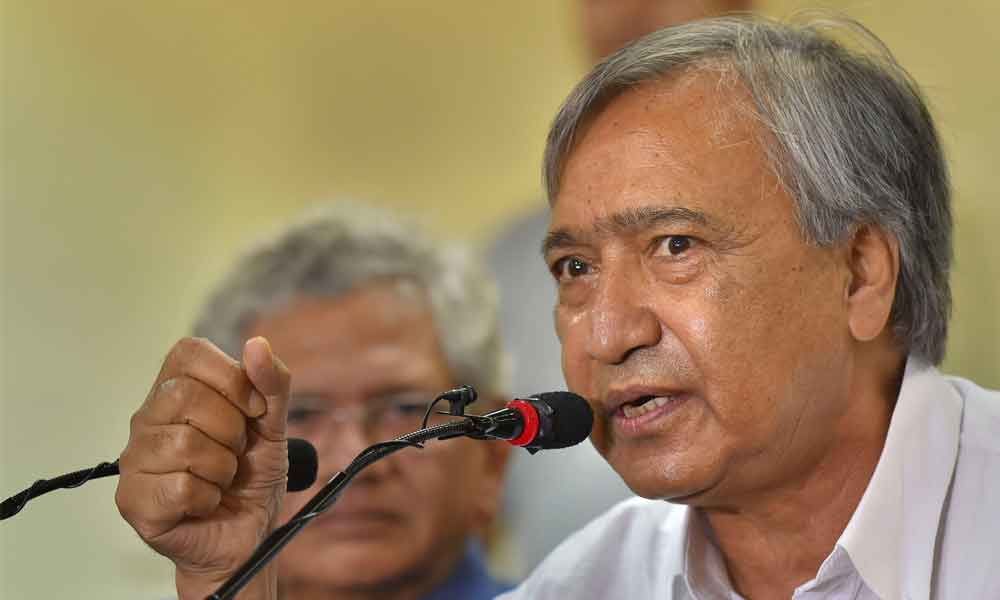 CPM leader from Kashmir Mohd Yousuf Tarigami on Tuesday criticised the Centre for detaining former chief minister Farooq Abdullah under PSA and said that "people across the border are clapping" that the government has done what they could not.

New Delhi : CPM leader from Kashmir Mohd Yousuf Tarigami on Tuesday criticised the Centre for detaining former chief minister Farooq Abdullah under PSA and said that "people across the border are clapping" that the government has done what they could not.

Addressing a press conference with CPM General Secretary Sitaram Yechury, the former member of Jammu and Kashmir Assembly said that whatever is happening in Kashmir is not in the interest of the country.

"We, Abdullah and others are not terrorists. It is such a horrible time. I am very disturbed," he said.

Tarigami said he was under house arrest since August 5, when the Centre announced abrogation of the special status given to Jammu and Kashmir under Article 370 of the Constitution and bifurcation of the state into Union territories.

He was brought to the AIIMS here for treatment on the direction of the Supreme Court after it allowed Yechury to meet him in Srinagar and submit a report on his health condition.

Tarigami slammed the government over scrapping of special status to Jammu and Kashmir and contested its claim of normalcy returning to the Valley.

"It has been 40 days of restrictions but the government claims there is normalcy. Do this in Delhi or any other city and see what is the situation of business, hospitals, schools and media.

"How can they say that everything is under control? They are claiming that no one has been killed. I say people are dying, there is suffocation in the state," Tarigami said.

Alleging that the "very foundation of the unity of India with Kashmir is under assault", he said, "Listen to our version, the version of the people of Kashmir. We all want to live peacefully. I am not a foreigner."

People of Jammu and Kashmir had decided to remain with secular India, Tarigami said.

Tarigami said militancy can be tackled with the help of people but the government's policy is not helping in building trust.

"I want to ask, can you build trust among people by beating them, putting them in jails, suspending internet and telephone lines, crippling the daily life? Isn't it playing into the hands of the enemies of this country? he asked.