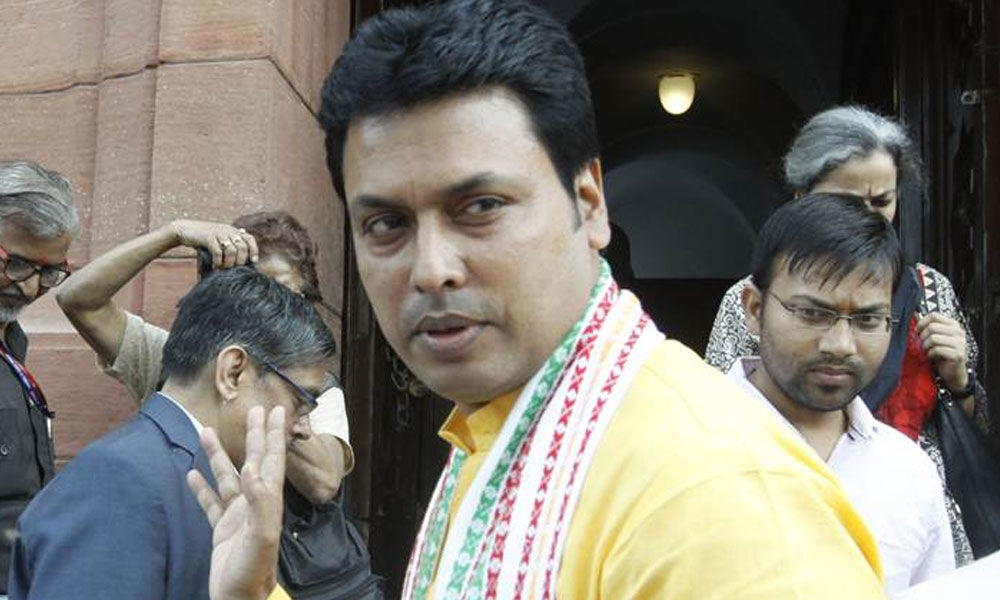 The Congress' Tripura unit has demanded an "unconditional" public apology from Chief Minister Biplab Kumar Deb for calling the party "sly fox, thief and satan", and said the use of "unparliamentary" words was unbecoming of a leader of his stature.

Agartala: The Congress' Tripura unit has demanded an "unconditional" public apology from Chief Minister Biplab Kumar Deb for calling the party "sly fox, thief and satan", and said the use of "unparliamentary" words was unbecoming of a leader of his stature.

Addressing a gathering here a few days ago, the chief minister had called Congress leaders "traitors" and a "band of Satan", and claimed they have come to eat the fruits of success in a Communist-free state. "Chief Minister Biplab Kumar Deb used objectionable words such as 'broker', 'sly fox' and 'thief' while speaking against the Congress and return of former BJP Tripura vice-president Subal Bhowmik to the party," a statement quoted Congress vice-president Tapas Dey as saying.

The use of "indecent" words by the chief minister was "unbecoming of a leader of his stature", Dey said. The Congress has asked Deb to prove his allegations or offer an "unconditional" public apology to the party and Subal Bhowmik. Subal Bhowmik had joined the Congress on March 19, saying that he felt like he was a burden on the saffron party. Bhowmik had joined the BJP in 2014 and was named the vice-president of the party's state committee. Earlier in 2008, Bhowmik had won from the Sonamura assembly constituency on a Congress ticket. "The Constitution grants the right to free practice of political activities to everyone.

However, as seen in several instances, the BJP is intolerant to the individual rights and freedom of people, and bursts out in frustration whenever anyone leaves their party," the statement read. It also accused Deb and former chief minister Manik Sarkar of being involved in an "unholy nexus". "We are rather pained to find out that the incumbent chief minister and the former chief minister share an uncanny love and affection, which is often found to soften their criticism of each other. We find this 'unholy nexus' a dangerous trend for democracy," it said.