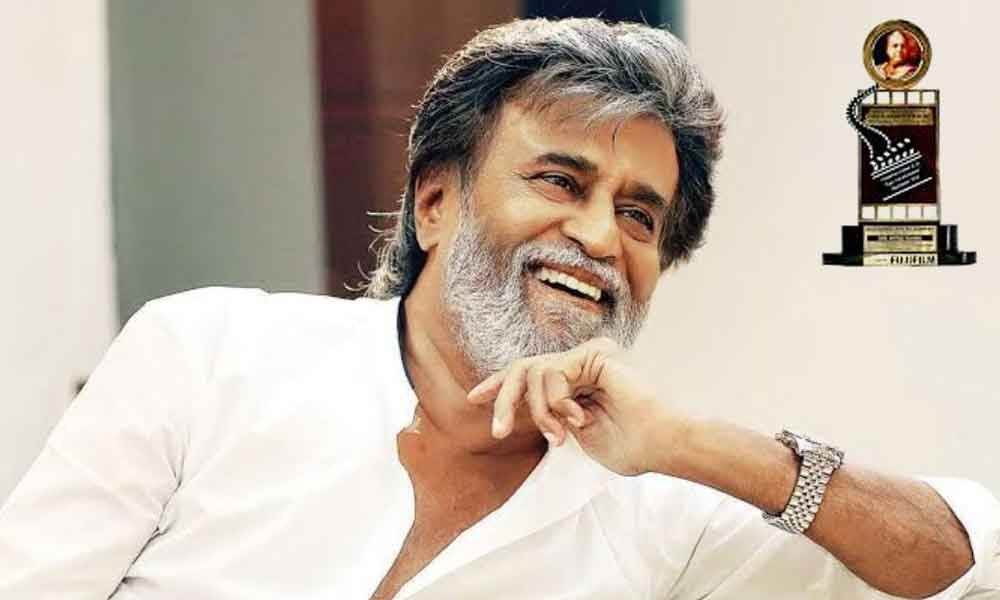 New Delhi: Respect and valedictory messages poured in on Thursday for southern superstar Rajinikanth, who will be honoured with the 51st Dadasaheb Phalke Award.

"Hearty congratulations to Shri @rajinikanth on being conferred the prestigious Dadasaheb Phalke Award. Over the past many years, the versatile actor has been enthralling people by portraying a vast array of roles depicting myriad hues of human experience and emotions. #Rajinikanth," said Naidu and added: "My best wishes for the renowned thespian's future endeavours! #Rajinikanth."

"Popular across generations, a body of work few can boast of, diverse roles and an endearing personality...that's Shri @rajinikanth Ji for you. It is a matter of immense joy that Thalaiva has been conferred with the Dadasaheb Phalke Award. Congratulations to him," Modi said.

Rao said Rajinikanth, who evolved a unique style of his own in the film career, has crores of fans in the country and all over the globe and it is great and befitting that he is selected for the prestigious Phalke award.

Political party leaders in Tamil Nadu greeted actor Rajinikanth for being conferred with the Dadasaheb Phalke. Chief Minister K. Palaniswami in a tweet said he had wished Rajinikanth over phone.

"The Dadasaheb Phalke Award is the recognition for your hardwork in the movie industry," the Tamil Nadu CM said. Palaniswami also said he would pray for Rajinikanth to get more awards and for a long life.

DMK President MK Stalin in a Facebook post said he was happy to hear Tamil movie world's incomparable artiste and his friend Rajinikanth getting the Dadasaheb Phalke Award. "He should have been given this award long back. It is being given belatedly. My wishes to Rajini who not only in acting but has also set an example in friendship," Stalin said.

Actor-turned-politician Kamal Haasan also greeted Rajinikanth with a tweet. The highest award fits Rajini 100 per cent as he has proved that by mere presence on the screen one can win over fans.

Rajini is called Talaivar or "Style Mannan" in the Tamil movie industry.

Calling Rajinikanth "one of the greatest actors in the history of Indian cinema", the I&B minister said that the actor was being awarded for his contribution in the field of acting, production and screenwriting for Indian cinema.

Posting a picture of the actor, Javadekar wrote: "Happy to announce #Dadasaheb Phalke award for 2020 to one of the greatest actors in history of Indian cinema Rajnikant ji His contribution as actor, producer and screenwriter has been iconic I thank Jury @ashabhosle @SubhashGhai1 @Mohanlal @Shankar_Live #BiswajeetChatterjee."

Andhra Chief Minister YS Jagan Mohan Reddy also congratulated the film star, who enjoys a demigod status, made his debut in Tamil cinema with "Apoorva Raagangal". Among his numerous hits are films like "Baashha", "Sivaji" and "Enthiran". He is known as Thalaivar or leader by his fans.

Widely regarded as one of the most popular cinematic icons in India, Rajinikanth has also been honoured with the Padma Bhushan in 2000 and the Padma Vibhushan in 2016 by the Government of India. The Dadasaheb Phalke Award is India's highest honour in cinema.

It is presented annually at the National Film Awards by Directorate of Film Festivals of the Information and Broadcasting ministry of the Government of India. The first recipient of the award was actress Devika Rani. Recent recipients include Amitabh Bachchan, Vinod Khanna, filmmaker K Vishwanath and Manoj Kumar.

Rajnikant is very popular in all the southern states and also Bollywood. All his movies are invariably dubbed in Telugu, Malayalam, Hindi and has set the silver screen on fire for many generations.

Congratulatory messages continue to pour in from political leaders, actors, directors and social workers, besides people from all walks of life.