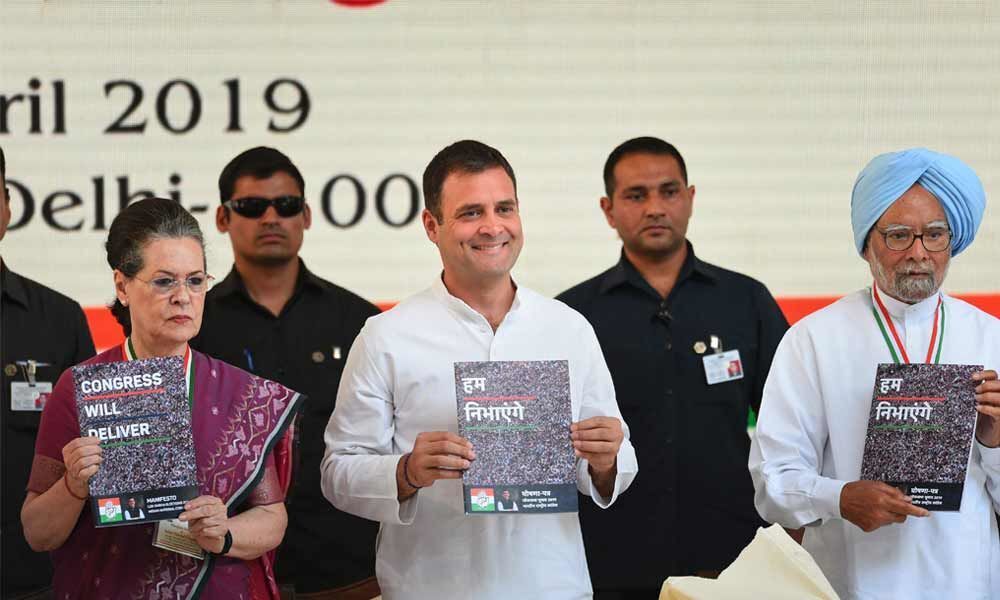 "Congress Will Deliver" - with this tagline, the grand old party released its manifesto on Tuesday for the Lok Sabha elections to be held from April 11

New Delhi: "Congress Will Deliver" - with this tagline, the grand old party released its manifesto on Tuesday for the Lok Sabha elections to be held from April 11.

The manifesto was released in the presence of Congress president Rahul Gandhi, UPA chairperson Sonia Gandhi and former prime minister Manmohan Singh. Priyanka Gandhi and other big leaders were also there.

The Congress president appealed to the people to vote on 'real' issues of joblessness, farm distress and women security rather than divisive ones that Prime Minister Narendra Modi is busy stoking during electioneering across the country.

The manifesto has identified employment and economy, as key promises on which it would deliver if it were to form the government at the Centre. The party's slogan for the polls is "Congress will deliver".

Gandhi said the manifesto had five key ideas, akin to the five fingers in the Congress election symbol 'hand'.

These he said are the party's minimum income guarantee, or Nyay, scheme to ensure Rs 72,000 per year to the poorest 50 million families, 2.2 million jobs by March 2020, or within a year of forming the government, increasing MNREGA work days from 100 to 150, a separate Kisan Budget and making non-payment of debt by farmers a civil offence rather than a criminal one, and increasing the expenditure on education to 6 per cent of GDP, and on health care to 3 per cent.

As per the Congress, it held 121 public consultations and 53 closed door consultations to prepare the manifesto and that it reflects the hopes of the people.

Speaking at the press conference, Chidambaram said the manifesto will set the narrative for the polls.

"The BJP may be the ruling party today but the party is trying to take the narrative to five years back ...to divisiveness and hyper nationalism....Our manifesto is focussed on real issues of jobs," Chidambaram said.

Chidambaram said unemployment, farmer distress and security of women are top three issues. The theme of the manifesto is how to marry wealth and welfare, he added. Rahul Gandhi said he instructed party members not to prepared it in closed doors.

The manifesto is the voice of the people, he said. "I do not want a single thing in this manifesto that is a lie because we have been hearing large number of lies spoken everyday by our PM," he added.

On PM Modi and BJP raising issues of nationalism and Hindu identity, the Congress chief said "all were Hindus", but the real issues were farm distress and joblessness.

He said the Congress' Nyay scheme has changed the narrative of the 2019 Lok Sabha polls. He said the scheme would help the economy which got "jammed" due to BJP's demonetisation move.

He gave the slogan: Garibi pe war, 72000. On contesting from Wayanad, he said it was a message of solidarity as southern India has felt left out by the Modi government.