High voter turnout in TN may throw up surprise 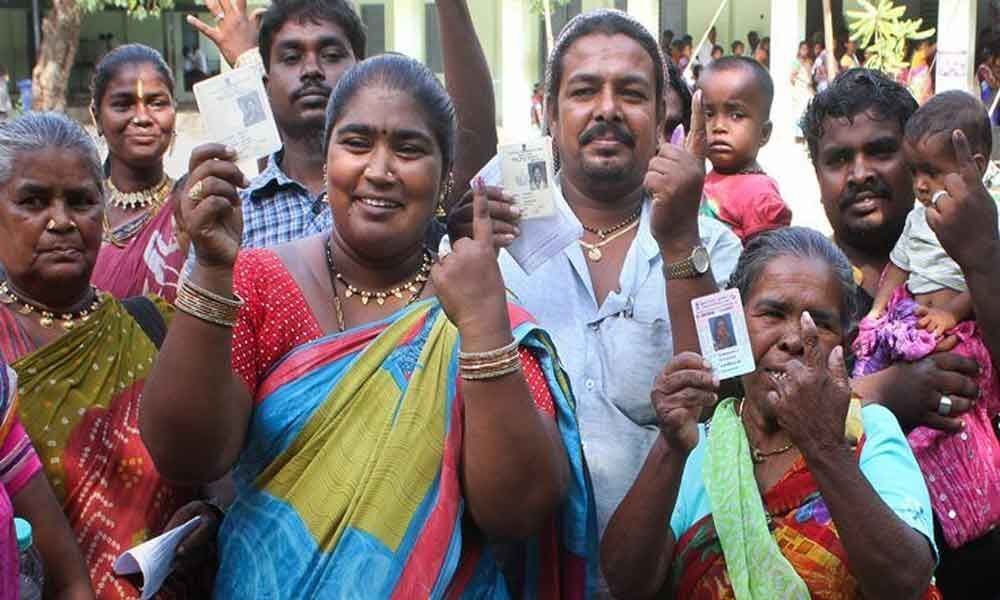 Conflicting views are expressed by experts on the outcome of the Lok Sabha polls in Tamil Nadu given the final polling percentage of around 73 per cent.

Chennai: Conflicting views are expressed by experts on the outcome of the Lok Sabha polls in Tamil Nadu given the final polling percentage of around 73 per cent.

In 2014 Lok Sabha polls, the ruling AIADMK contesting alone won 37 out of 39 seats sweeping out the major opposition party, the DMK. The remaining two seats were won by BJP (Kanniyakumari) and the PMK in Dharmapuri.

"If the final polling figure settles around 73 per cent, then it is something remarkable. What the figure indicates is that it could be natural or articicially induced," writer and political commentator Maalan Narayanan told IANS.

But Narayanan quickly adds: "If one takes into account the recent utterances of DMK leaders besides its leaders' complaint to the Election Commission on Thursday about AIADMK indulging in booth capturing, it seems they (DMK leaders) are not confident of winning the polls".

He said the DMK initially said it would win all the 40 Lok Sabha seats (39 in Tamil Nadu and the lone seat in Puducherry).

With AIADMK stitching a mega alliance with PMK, BJP, DMDK, TMC, PT, PNK and others in Tamil Nadu, the DMK's tone came down as the vote share arithematic was in favour of the rival front.

Narayanan does not see any wave in DMK's favour, but there could be a tilt in its favour.

An old hand in AIADMK not wanting to be quoted told IANS: "The old theories of voting doesn't apply now as the demography has changed with the entry of large number of first-time voters and many voters of less than 30 years of age."

He said polling was good in pockets wherever minorities were concentrated whereas there was not much consolidation of Hindu votes.

Predicting a split verdict, he said the DMK front may win about 30 Lok Sabha seats.

On the other hand, Associate Professor in Madras Institute of Development Studies C. Lakshmanan predicts a clean sweep for the DMK-led front citing the polling percentage.

He said after the AIADMK sewed up its mega alliance, DMK's confidence did come down a bit. But it perked up fast owing to its social media campaign and the alliances it managed with parties such as the Congress, IUML, MDMK, KMDK, CPI, CPI(M), VCK and IJK.

Lakshmanan said the raid by Income Tax (IT) department at the residence of DMK leader Kanimozhi on Tuesday had backfired.

He said the election results could throw up several surprises.

"If Kamal Haasan's MNM does not get good share of votes, then it would mean people are not in favour of actor-politicians. Similarly, if PMK is unable to deliver on its Vanniars consolidation, then it may also lose out," Lakshmanan said.

"In Tamil Nadu election landscape, cash is the king. There is no wave in favour of any one front. If there was an anti-incumbency wave, then it would have been evident by high voter turnout in the morning. But the voter turnout was not much in the morning. The spurt in polling percentage happened only in the afternoon," political strategist, John Arokiasamy told IANS.

He said polling in Chennai was very poor and was pretty as such in urban areas. Voting was, however, high in rural areas.

"There was no religious polarization. Many voters' names did not figure on the official list and hence they were unable to vote. Similarly, the transport arrangements were poor, so, many from Chennai could not travel to their native place to vote," Arokiasamy added.

"Instead of a statewide pattern in voting, there are regional voting patterns in Tamil Nadu. While caste-based voting is fixed one, the swing factor for votes is influenced by money," Arokiasamy said.

According to him, the absence of leaders like J.Jayalalithaa for AIADMK and M. Karunanidhi for DMK will be felt in this election by these parties.

"Jayalalithaa would have gone alone again had she been alive. Similarly, Karunanidhi would have swung the polls strongly in his favour given twin anti-incumbency factors," Arokiasamy said.

According to him, the two fronts may share the spoils with DMK taking a larger pie, say, about 25 seats out of the 38 seats that went to the polls.

"I feel this time the election in Tamil Nadu is between Prime Minister Narendra Modi and Gandhi -- the Indian currency is colloquially known as Gandhi note," Arokiasamy said.

He said even if AIADMK had decided to pay cash for votes, owing to the weak leadership, only a part of that would have reached the voters, and as a result, it may not have resulted in votes.