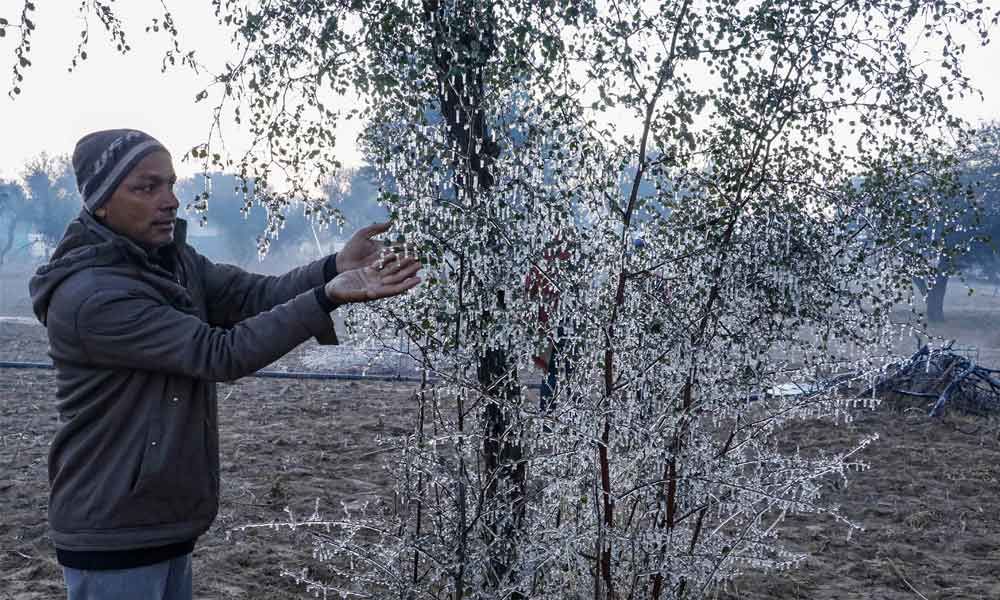 Ganesh Sharma, a farmer, shows icicles on the branches of a tree as temperature drops below zero degree at Sikar district in Rajasthan on Saturday
Highlights

New Delhi: The India Meteorological Department (IMD) on Saturday issued a 'red' warning for the national capital after cold wave conditions continued unabated in the region.

The IMD has issued the warning after the temperature in parts of Delhi on Saturday morning reaching 1.7 degrees Celsius. In Safdargunj Enclave it was around 2.4 degrees Celsius.

Haryana's Hisar was the coldest place with the minimum temperature settling at 0.2 degrees Celsius, seven notches below normal limits.

Most places in Haryana and Punjab witnessed fog with visibility reducing to 600 metres, disrupting air, rail and road traffic in the region.

Due to dense fog, flight operations and train services have also been affected in Delhi.

Latest satellite imageries indicate dense cloud engulfing most parts of northwest India and extending all along the Indo Gangetic plains.

According to IMD, from December 31 onwards, rain is likely in the capital city and its adjoining areas such as Noida, Gurugram, Ghaziabad and Faridabad.

This weather phenomenon is likely to continue till January 3, predicted the weather forecast agency.

WhatsApp Limits Its Status Video To Just 15 Seconds Itself

64 of total 87 Coronavirus patients in AP found to be attended...