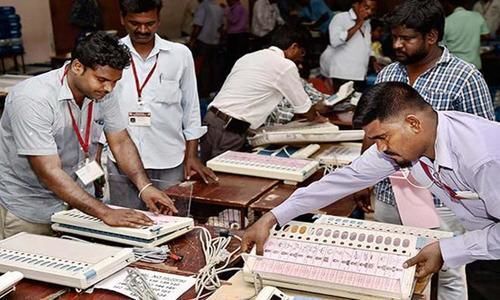 Election Results 2019: The Returning Officer (RO) is responsible for conducting elections in a constituency, which also includes the counting of votes.

The Lok Sabha elections were held in seven phases. It started on April 11 and ended on May 19. For 543 seats over 2,000 parties and 8,000 candidates contested. This was the 17th Lok Sabha Election. The majority party members will decide the Prime Minister of our country.

After handling the arrangements and logistics for organizing elections, Election Commission responsibility is not done yet. India is now eagerly waiting for the final results. The counting will begin on May 23 at 8 am.

Things to know about the counting process for the Lok Sabha Election 2019:

Who counts the votes in Indian general Elections?

Where are the votes counted?

The RO decides the place where the votes for the parliamentary electoral district have to be counted. The date and time of counting are decided by the Electoral Commission. Ideally, the counting of votes for a constituency should be done in one place, preferably at the headquarters of the Returning Officer in that district.

In each round of counting, votes of 14 EVM are counted. The counting of votes for each segment of the Assembly of a parliamentary electoral district is carried out in a single room.

In the electoral districts with a huge number of candidates might become challenging to count the votes of all the candidates in a single room. Then the number of counting rooms or tables may be increased with the prior permission of the Electoral Commission.

How are votes counted?

First, the Postal ballot papers are counted. After 30 minutes, the EVMs counting can start. The counting staff and agents examine the EVMs before opening. Then, the counting of votes starts. The EVM is switched on and the Result button seal is pierced. The button is then pressed and it displays the total number of votes recorded for each candidate at a particular polling station.

The process for counting VVPAT slips?

The EC recommends the process for randomly selecting an EVM for each segment of the Assembly of a parliamentary constituency for the VVPAT pairing. Verification of VVPAT paper slips is performed within a VVPAT counting booth secured in the counting room with access only to authorized personnel. Any counting table in the corridor can be converted into a VVPAT counting booth after completing the EVM vote count. Parliamentary constituencies generally have between five and 10 Assembly segments.

The Supreme Court has decided that the VVPAT slips from five voting centres selected at random for each segment of the Assembly will correspond to the result shown in the respective EVMs. This implies that the VVPAT paper slips must be matched with approximately 25-50 machines for each parliamentary constituency. This process requires the personal supervision of RO / ARO.

The EC has decided that the count of five VVPAT will be done sequentially. After the VVPAT comparison process has been completed the RO can declare the final result for the constituency.

What if the VVPAT count and the EVM results don't match?

If this happens, the printed paper slips count is considered as final. The EC has not clarified whether there would be any further action (such as counting of all VVPATs in a constituency or Assembly segment) if there is a discrepancy in the counts of one of the five VVPATs.

The Supreme Court made it mandatory to verify EVM votes with the VVPAT slips from five random polling booths in each assembly segment and this will be done after the counting of votes and not before, told the Commission.