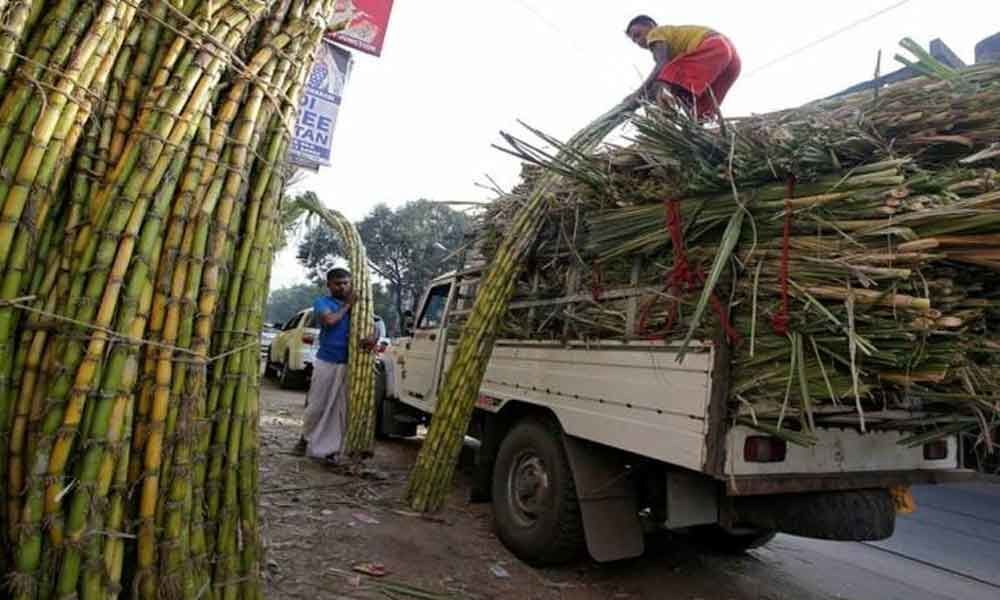 With posters, buntings and rallies, the clamour of poll-time campaigning is all around in the area famed as the country's sugar bowl but the very word election strikes a sour note for many farmers.

Tractors loaded with cane waiting to be crushed line the roads across swathes of western Uttar Pradesh, telling the bitter story of sugarcane farmers caught in a pincer trap of unpaid dues and low prices.

With posters, buntings and rallies, the clamour of poll-time campaigning is all around in the area famed as the country's sugar bowl but the very word election strikes a sour note for many farmers.

The sounds of NOTA (none of the above) appear to drown out any promises being made by parties with farmers saying they are tired of promises and don't know whom to trust.

"We will go for NOTA," said a frustrated Om Singh, a sugarcane farmer in Kairana for 30 years but unable to feed his family.

Thousands of cane farmers in the area, which produces over 50 percent of the country's total sugarcane produce and will go to the polls in the first phase of the Lok Sabha polls on April 11, are awaiting payments of over Rs 9,000 crore from sugar mills pending for over a year.

Each grower has dues of at least Rs 1.5 lakh.

The constituencies of Kairana, Baghpat and Muzaffarnagar collectively have 11 sugar mills. Tractors stacked with cane waiting to be crushed in the mills are a recurrent sight.

Satyaveer, 55, sitting outside the Ramala sugar mill in Baghpat for over 18 hours to get part of his produce weighed, said the non-payment of dues signals the end of his livelihood.

"My family has been producing sugarcane for over five decades. It has always been my livelihood and a way of living for me and my family. But it is being killed by fake promises of the BJP and others in authority," Satyaveer said.

The mill manager tells us we will get our dues when government gives them theirs, said Satyaveer who has dues of over Rs 2 lakh.

Farmers in nearby Khatauli are also belligerent about the low minimum support price (MSP) and blame the BJP government in the state as well as the Centre for making false promises.

Rajpal Singh said he grows nearly 400 quintals (one quintal is 100 kg) of sugarcane in a year but is unable to provide for his family.

"We sell sugarcane at Rs 325 per quintal. The government should increase the MSP to at least Rs 450 per quintal," Rajpal Singh said.

"There are huge costs involved in growing sugarcane. A 150 ml medicine bottle which is used three times in one crop alone costs Rs 1,800. My pending dues are around Rs 1.5 lakh. We cannot sell our harvest to anyone else but the mills," he said.

The farmers are crying "injustice" on the part of sugar mills, saying there is a fixed period of 14 days within which the farmers are supposed to be paid their dues.

"Such deadlines need to be kept. There should be a strict implementation of law on those mills that violate this provision," said Rajpal Singh.

Sugar mills have a different story to tell.

Vinod Kumar, manager of the Ramala sugar mill in Baghpat, said there is surplus production and less demand. They can neither refuse the farmers their produce of sugarcane nor pay them because of their own financial crunch.

"I cannot reveal much but we are unable to sell sugar from the mill. The price of sugar is not decided by this mill but the government. We get orders from Lucknow. The current rate of sugar per quintal is Rs 3,105, that is Rs 31.05 per kg," he said.

Hoping to get their voices heard, farmers blocked the Muzaffarnagar highway in January this year, halting work on a flyover in Khatauli. But it was to little avail, they said.

Farmers in the sugar belt said they are also facing a crisis on the loan front as banks don't fix price of their land correctly.

"The market rate of per bigha land is Rs 3 lakh but banks lend money at the rate of Rs 15,000 per bigha," said Rajpal Singh. A bigha is a local measurement of land that varies from place to place.

The cane growers are unhappy with the Narendra Modi government scheme to give Rs 6,000 each annually to 120 million farmers with less than five acres land each.

"Rs 6,000 in a year is nothing. With our dues not being cleared such schemes are useless," said Rajpal Singh.

The distressed farmers said the government should set up ethanol factories to help them earn more.

"We produce surplus sugarcane which results in surplus sugar. The government should ensure the price of sugar does not come down in the market because of excess production.

"If the government allows us to use the extra sugarcane to produce ethanol, the issues of MSP and the market price can be resolved," said Dharmendra, leader of the Bharat Kisan Union, based in Muzaffarnagar.

The issue of attacks by stray cattle is also leading to huge losses, farmers said.

"Stray cows and bulls enter the fields and damage crops but farmers cannot do anything about it because they can get arrested if they touch the cattle," said Adil, a resident of Khatauli village, taking a dig at the government's "gau raksha" policy.

"Cows are a menace in sugarcane farms. We work hard to sow and water the crops but these stray cows, which cannot be touched under BJP rule, damage it all," added Sharda, a farmer's wife, labelling all leaders liars.

Sugarcane farmers will play a key role in the upcoming elections in the three constituencies of Kairana, Baghpat and Muzaffarnagar. The eight constituencies in the region also include Meerut, Bijnor, Saharanpur, Ghaziabad and Gautam Budh Nagar.

In 2014, all eight seats went to the BJP. There was a bypoll held in Kairana subsequently that went to the RLD.