Lok Sabha polls 2019: These Kingmakers could decide who forms the new government 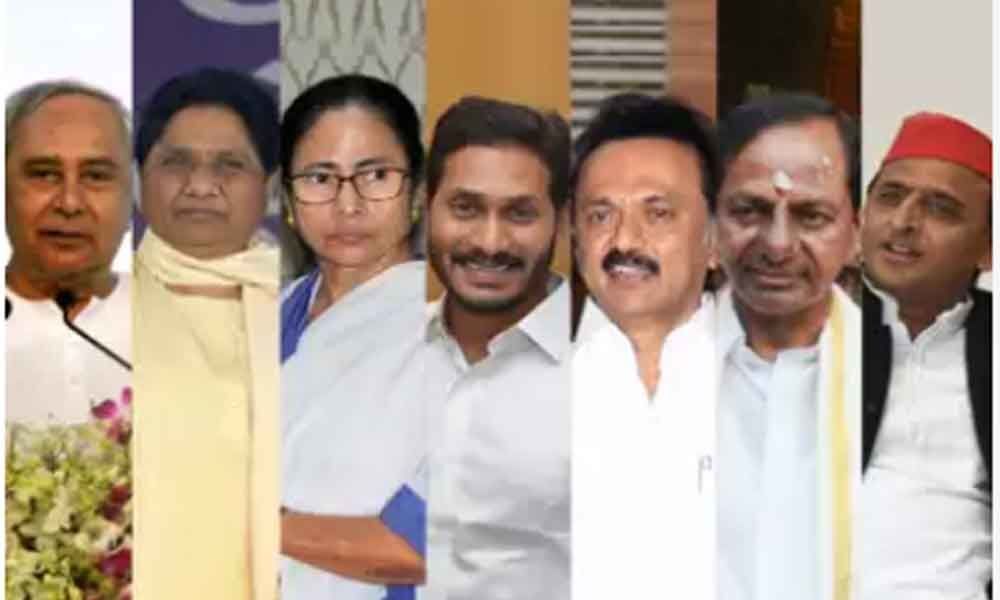 Exit polls suggest Narendra Modi will win a landslide victory when votes are counted on Thursday.

Exit polls suggest Prime Minister Narendra Modi will win a landslide victory when votes are counted on Thursday. But if the polls are wrong, he may need outside help to form government.

Here's a list of kingmakers -- regional political leaders with clout across various Indian states -- who may decide whether the Modi-led Bharatiya Janata Party or their biggest political rival, Rahul Gandhi's Indian National Congress, can reach the 272 seats needed for a majority.

The mild-mannered Naveen Patnaik, supremo of the Biju Janata Dal in the eastern state of Odisha, could well be one of the key men to be wooed by both Modi and Gandhi. With 3.5 percent or 18 members of Parliament, the Biju Janata Dal was the fifth-largest parliamentary party during Modi's first term.

This time, widely-varying exit polls predict Patnaik will win between two and 15 seats. The prime minister has ensured cordial relations with 73-year-old Patnaik and even praised his handling of cyclone Fani earlier this month. Odisha sends a total 21 members to the lower house.

The 63-year-old leader of the Bahujan Samaj Party, which represents Dalits or lower castes who make up about one fifth of India's population, joined with Samajwadi Party and Rashtriya Lok Dal to form an anti-BJP front in Uttar Pradesh. Mayawati, who publicly clashed with BJP leaders over religious remarks during campaigning is expected to support an anti-Modi front.

But post-exit polls, she declined to join a meeting of opposition leaders on May 20. Her alliance with Samajwadi party was widely expected to sweep India's biggest state. Yet, exit polls suggest the opposite, giving the BSP-Samajwadi alliance between 20 and 45 seats of the 80 parliamentary seats from Uttar Pradesh.

Chief minister of the eastern state of West Bengal, which sends 42 members to the lower house, Mamata Banerjee could be one of the deciders for a non-BJP government in New Delhi.

Her Trinamool Congress Party, formed after moving out of Gandhi's Indian National Congress in 1998, has been the strongest regional rival for Modi's BJP over the last six weeks. Bengal elected 33 TMC members to the 16th Lok Sabha, making it the fourth-largest parliamentary party. Exit polls, which she dismissed as "gossip" suggest her tally could fall to between 24-29. Modi's biggest parliamentary rival after the Congress, Banerjee has been one of the most serious roadblocks to the BJP expanding its electoral presence in eastern India.

Amid reports that the Yuvajana Sramika Rythu Congress may be poised to win more parliamentary seats than his local rival and former Modi ally Chandrababu Naidu, both BJP and Congress are reportedly trying to win Y.S. Jagan Mohan Reddy's support. Congress has tried to persuade Jagan to attend a meeting of opposition leaders in New Delhi on May 23, NDTV reported.

The BJP has also reportedly indicated readiness to fulfill Jagan's demand of a "special status" to Andhra Pradesh. Exit polls suggest Reddy's party, which accounts for four out of the 25 members Andhra sends to the Parliament, may win up to 20 seats.

Chief of the Dravida Munnetra Kazhagam in Tamil Nadu -- the state with second-largest gross domestic product -- M.K. Stalin has publicly endorsed Gandhi for prime minster. But local BJP leaders in Tamil Nadu have alleged the 66-year-old was in touch with them for a post-poll deal; an accusation he has denied. Exit polls suggest Stalin's alliance with Congress may win as many as 27 of Tamil Nadu's 39 parliament seats.

Known as KCR, the chief minister of India's youngest state Telangana has been reportedly trying to pull together a non-BJP, non-Congress front to form government. The 65-year-old who tried to ally with Tamil Nadu's Stalin, is said to likely lean towards BJP. Rao's party Telangana Rashtra Samithi currently has 10 of the 17 parliament seats from Telangana. His party is expected to raise that number to 13, according to exit polls.

Leader of the Samajwadi or Socialist party, Akhilesh Yadav commanded a mere seven seats in the last Lok Sabha or lower house of the Indian Parliament. Yet his alliance with Mayawati was expected to woo the largest block of voters from lower castes across Uttar Pradesh, which elects India's biggest number of parliamentarians. Yadav, 46, may stand with the anti-Modi parties.