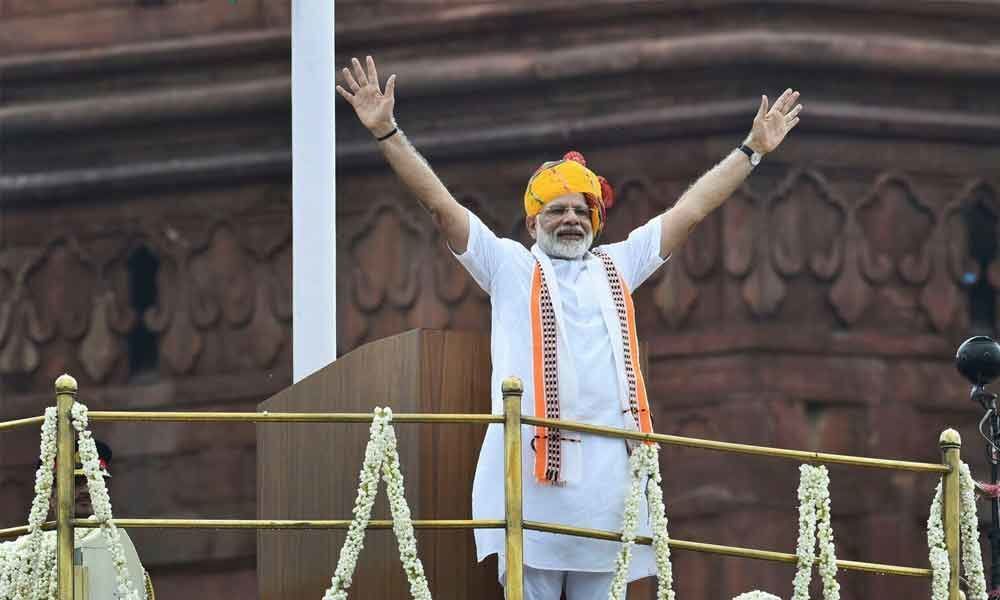 Asserting that India now has a decisive leadership to handle the country's myriad challenges, Prime Minister Narendra Modi on Thursday announced the creation of the post of chief of defence staff, vowed to fulfil aspirations of people of Jammu and Kashmir, called for checking the "population explosion" and renewed his push for 'one nation, one election'.

New Delhi : Asserting that India now has a decisive leadership to handle the country's myriad challenges, Prime Minister Narendra Modi on Thursday announced the creation of the post of chief of defence staff, vowed to fulfil aspirations of people of Jammu and Kashmir, called for checking the "population explosion" and renewed his push for 'one nation, one election'.

In his first Independence Day address to the nation in his second term from the ramparts of Red Fort, Modi pitched the abrogation of Article 370 as a step towards 'one nation, one Constitution', saying a new approach was needed as the provisions granting special status for Jammu and Kashmir failed to yield desired results in 70 years and that every possible effort will be made to develop the region.

As a slew of significant announcements like the promise to provide piped drinking water to every household across the country marked his nearly 95-minute speech, the prime minister said his government in the second term will work towards fulfilling the people's aspirations and dreams after meeting their needs in the last five years.

In his sixth consecutive Independence Day address, Modi also touched upon a host of other issues, including tackling cross-border terrorism, corruption, poverty, ensuring ease of living, banning single-use plastic, curbing use of fertilisers and water conservation.

With his government facing criticism for increasing taxes on the affluent class, Modi sought to assuage them, saying those creating wealth must be respected as wealth distribution can happen only when wealth is created.

Wearing a white kurta and a colourful safa, the prime minister referred to BJP's big win in the general election and said his government's return to power showed as to how despair had given way to hope with people believing that the country can change for the better after seeing his dispensation's first five years of work.

Modi said the BJP-led government worked to fulfil the common man's needs and especially targeted the welfare of rural India, farmers, backwards, Dalits and tribals. He then added,

"But time changes. If the 2014-19 period was about fulfilling people's needs, then the time after 2019 (polls) is about meeting their aspirations and dreams. We have prepared a blueprint keeping in mind how India should be in the 21st century... and are taking steps towards it."

He said within a short span of 10 weeks, his government in its second term took series of major decisions, including revocation of Article 370, strengthening anti-terror laws, reforming medical education and legislation against triple talaq, emphasising that it is not shying away from taking bold moves.

Rejecting criticism on the government's decisions on Jammu and Kashmir, Modi wondered why those speaking in support of Article 370 kept it as a temporary provision for 70 years after introducing it.

"If it was so essential and life-changing, if you had the conviction, then for 70 years, why did it remain temporary, why did you not use your large mandates to make it permanent?" Modi questioned, adding his government is determined to ensure all-round development of Jammu and Kashmir, and Ladakh.

"One nation, one Constitution has become a reality and our nation is proud of it," he said and referred to Parliament clearing legislations relating to the decisions with a two-third majority, to buttress his point that majority of lawmakers wanted it.

"Our government does not delay decisions. We neither nurse problems nor keep them festering," he said on Article 370.

Referring to the law against triple talaq, he said it should not be seen through political prism. "If we can take steps against 'Sati' custom, female foeticide, child marriage and dowry, then why not against instant triple talaq," he said The Prime Minister said that the interest of the country was paramount for him not his political future.

In a clear reference to Pakistan, Modi said those who support, protect and export terrorism must be exposed.

He said India is not the only target of terrorism in the region. Countries like Bangladesh, Sri Lanka and Afghanistan have also been affected. The prime minister also greeted Afghanistan which is all set to commemorate 100 years of its independence on August 19.

Talking about making people's lives easier, he said his priority was to ensure 'ease of living' with government having minimal role in people's lives. "Let our people have the freedom of pursuing their own aspirations, let the right eco-system be made in this regard," he said.

On Goods and Services Tax, he said it brought to life the dream of 'one nation, one tax'. Voicing concern over "population explosion", the prime minister said it leads to many difficulties and there was need for the Centre as well as state governments to launch schemes to tackle it.

Keeping one's families small is an act of patriotism and those who do so deserve our respect and need to be felicitated, he said. "Population explosion has been occurring at an unrestrained pace. This population explosion is creating innumerable challenges for us and the coming generations," the prime minister said.

Prime Minister Narendra Modi said the country has entered an era where it does not need to hide its problems and asserted that the time had come to face challenges head on.

Taking decisions by keeping in mind "political profits and losses" causes more problems for coming generations, he said. Modi led the BJP to a historic victory with 303 seats out 543 in Lok Sabha compared to 282 in 2014 general election.