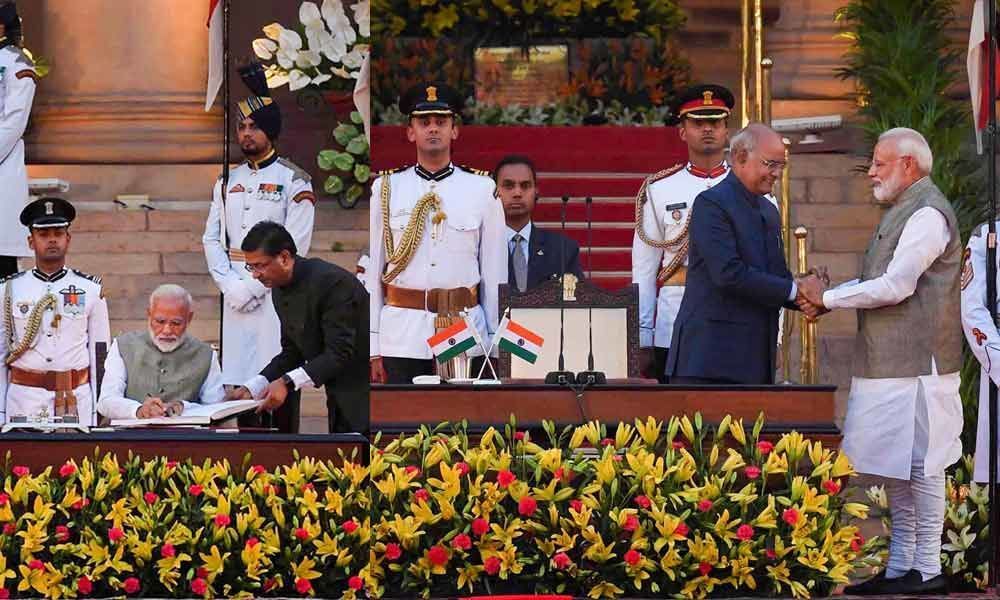 New Delhi: Narendra Modi was on Thursday sworn in as country's Prime Minister for a second term, heading the National Democratic Alliance government in the presence of a large gathering of national and international dignitaries.

Modi, 68, was administered the oath of office and secrecy by President Ram Nath Kovind at a glittering ceremony at the forecourt of majestic Rashtraparti Bhavan. Top opposition leaders including former prime minister Manmohan Singh, Congress President Rahul Gandhi and UPA Chairperson Sonia Gandhi, corporate honchos, film stars, chief ministers and a galaxy of leaders from BIMSTEC countries were part of the nearly 8,000 guests at the ceremony.

This is the second time Modi took the oath at the forecourt of Rashtrapati Bhavan. Modi was sworn in by the then President Pranab Mukherjee in 2014 in the presence of over 3,500 guests including the heads of SAARC countries. Earlier, Chandra Shekhar in 1990 and Atal Bihari Vajpayee in 1999 were sworn in at the sprawling forecourt. Leaders of BIMSTEC countries including President of Bangladesh Abdul Hamid, Sri Lankan President Maithripala Sirisena, Nepal Prime Minister K P Sharma Oli, President of Myanmar U Win Myint and Bhutanese Prime Minister Lotay Tshering also attended the gala event.