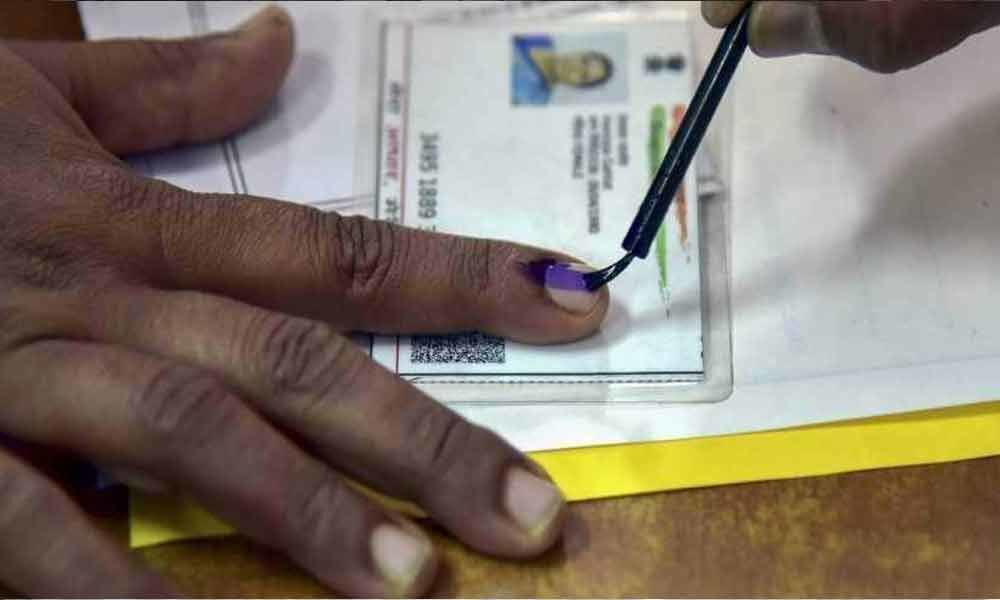 BJP MLA Bheema Mandavi and four police personnel were killed in the attack which came two days before polling.

RAIPUR: The naxal-affected Bastar Lok Sabha constituency in Chhattisgarh is all set to go to the polls Thursday amid tight security and looming threat from Maoists who have called for a boycott of elections.

In a grim reminder of the challenges being faced by security forces, Naxals carried out a major attack Tuesday in Dantewada district, which is part of the Bastar parliamentary constituency, the only seat in the state to vote in the first phase.

BJP MLA Bheema Mandavi and four police personnel were killed in the attack which came two days before polling.

"All preparations have been made for conducting a free and fair election in Bastar, the lone Lok Sabha constituency going to the polls in the first phase in the state on April 11," an official from the Chhattisgarh Chief Electoral Officer (CEO) office said.

The Bastar Lok Sabha (ST) constituency, where seven candidates are in the fray, consists of eight assembly seats.

Polling in four of them - Dantewada, Konta, Bijapur and Narayanpur - will be held from 7 AM to 3 PM. The remaining four assembly segments - Bastar, Chitrakot, Kondagaon and Jagdalpur - will see voting between 7 AM and 5 PM, he said.

"Of the 1,879 polling booths in the Bastar Lok Sabha constituency, 741 have been marked as hypersensitive and 606 as sensitive," the official said.

In view of Maoist threat, 289 polling stations were relocated to safer places, he said.

In 159 hypersensitive booths, polling parties were ferried by helicopters, he said.

A massive security blanket involving around 80,000 personnel has been thrown around in the Naxal-hit Bastar region for the polls, a senior police official here said.

Drones have also been deployed as part of the security arrangements, he said.

Over 50,000 personnel from state and central forces had been already stationed in the region to counter the Maoist threat.

Now, in view of the Lok Sabha polls, another 200 companies (roughly around 25,000 personnel) of paramilitary forces like the CRPF and the Border Security Force have been deployed in the constituency, he said.

The official said patrolling on the ground as well as by drones, which will keep a hawk eye from the sky, has been undertaken to track the movement of Naxals, especially in areas close to polling booths and camps of security forces.

The ultras, like previous occasions, have again given a call to boycott polls though posters and pamphlets put up in some pockets of the constituency, the official added.

There are seven candidates in the fray, but the main fight is likely to be between Congress's young and firebrand leader Dipak Baij and Baiduram Kashyap of the BJP in Bastar, which the saffron party has never lost since 1998.

The BJP denied ticket to its sitting MP Dinesh Kashyap and fielded its Bastar district chief Baiduram, a two-time former MLA from the region.

The Congress has pinned its hopes on Baij, the sitting MLA from Chitrakot, to win Bastar after putting up a stellar show in the last year assembly elections.

Aaytu Ram Mandavi of the Bahujan Samaj Party (BSP) and Ramu Ram Maurya of the Communist Party of India (CPI) are other key candidates in the fray.

Of the eight assembly seats that form the Lok Sabha constituency, seven are reserved for Scheduled Tribes (STs).

The Congress had won seven seats in the state elections, except Dantewada which was bagged by BJP's Mandavi.

The Lok Sabha constituency witnessed a lacklustre campaigning as no top central leader from either the Congress or the BJP addressed any election rally.

Prime Minister Narendra Modi addressed a public meeting on April 6 in neighbouring Kanker, where polling will be held in the second phase on April 18.

The state has 11 Lok Sabha seats of which 10 were won by the BJP in 2014. Three of them will vote in the second phase on April 18 and the rest seven in the third phase on April 23.