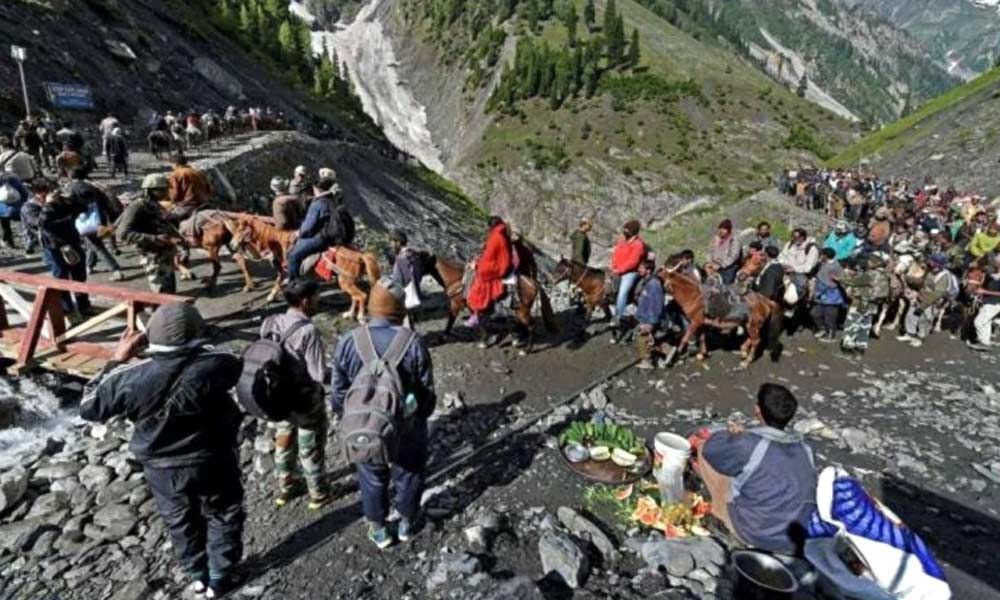 Situated 3,888 metres above the sea level in Kashmir's Himalayas, the cave shrine houses an ice stalagmite structure that symbolises mythical powers of Lord Shiva according to the devotees.

Over 2.70 lakh pilgrims have performed the ongoing Amarnath Yatra during the last 21 days as another batch of 3,178 pilgrims on Monday left Jammu for Kashmir Valley, officials said.

Officials of Shri Amarnathji Shrine Board (SASB) said since the Yatra started on July 1, a total of 2,72,004 pilgrims had 'darshan' inside the cave shrine.

Situated 3,888 metres above the sea level in Kashmir's Himalayas, the cave shrine houses an ice stalagmite structure that symbolises mythical powers of Lord Shiva according to the devotees.

The ice structure waxes and wanes with the phases of the Moon. Pilgrims approach the cave shrine either through the longer 45 km long Pahalgam route or the shorter 14 km long Baltal route.

Those using the Baltal route return to the base camp the same day after performing the Yatra. Helicopter services are available for the pilgrims at both the base camps.

Local Muslims are lending a helping hand to ensure that their Hindu brethren can perform the Yatra with ease and convenience to uphold the centuries-old tradition of Kashmir, abode of saints and Sufis.

The cave shrine was discovered in 1850 by a Muslim shepherd named Buta Malik. To reward the shepherd, a saint gave him a bag of charcoal that turned out to be gold, says the local folklore.

Symbolically, the lore turned out to b e true. The descendants of the shepherd have shared a portion of the offerings at the cave shrine for over 150 years.

This year's Amarnath Yatra will conclude on August 15 coinciding with the Shravan Purnima festival.