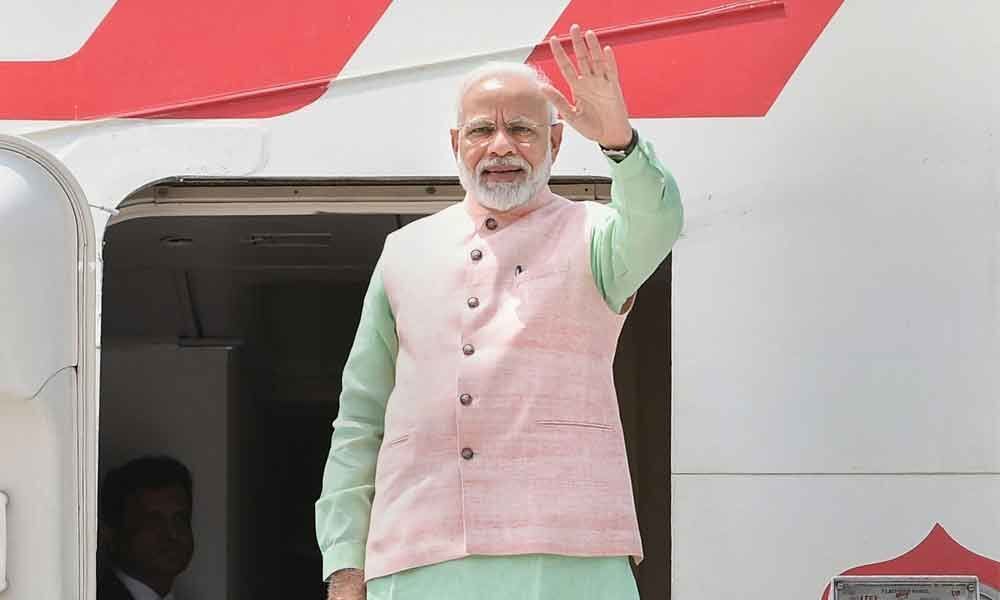 Ahead of his visit to France, the UAE and Bahrain, PM Narendra Modi on Thursday said the engagements will strengthen India's relations with time-tested friends and help explore new areas of cooperation.

New Delhi : Ahead of his visit to France, the UAE and Bahrain, PM Narendra Modi on Thursday said the engagements will strengthen India's relations with time-tested friends and help explore new areas of cooperation.

Modi will visit the three countries from August 22 to 26. He will reach France on Thursday. The prime minister said his visit to France reflects the strong strategic partnership which the two countries deeply value and share.

From August 22-23, he will have bilateral meetings in France, including a summit interaction with President Emmanuel Macron and a meeting with PM Edouard Philippe.

Modi will also interact with the Indian community and dedicate a memorial to the Indian victims of the two Air India crashes in France in the 1950s and 1960s.

Later, from August 25-26, he will participate in the G7 Summit meetings as Biarritz Partner at the invitation of President Macron in the sessions on Environment, Climate, Oceans and on Digital Transformation.

"India and France have excellent bilateral ties, which are reinforced by a shared vision to cooperate for further enhancing peace and prosperity for our two countries and the world at large," the prime minister said.

He said the strong strategic and economic partnership is complemented by a shared perspective on major global concerns such as terrorism and climate change. "I am confident that this visit will further promote our long-standing and valued friendship with France for mutual prosperity, peace and progress," Modi said.

During the visit to the United Arab Emirates from August 23-24, the prime minister said he looks forward to discussing with Crown Prince of Abu Dhabi Sheikh Mohammed bin Zayed Al Nahyan the entire gamut of bilateral relations and regional and international issues of mutual interest.

Modi said he also looks forward to jointly release the stamp to commemorate the 150th birth anniversary of Mahatma Gandhi along with the Crown Prince.

"It will be an honour to receive the 'Order of Zayed', the highest civilian decoration conferred by the UAE government, during this visit. I will also formally launch RuPay card to expand the network of cashless transactions abroad," the prime minister said in the statement.

Frequent high-level interactions between India and the UAE testify to our vibrant relations, he said. The UAE is the third-largest trade partner and fourth-largest exporter of crude oil for India, he said.

"The qualitative enhancement of these ties is among one of our foremost foreign policy achievements. The visit would further strengthen our multifaceted bilateral ties with the UAE," Modi said.

The prime minister will be in Bahrain from August 24-25. This will be the first ever prime ministerial visit from India to the Kingdom. "I look forward to discussing with Prime Minister Prince Shaikh Khalifa bin Salman Al Khalifa the ways to further boost our bilateral relations and share views on regional and international issues of mutual interest," Modi said.

The prime minister would also be meeting King of Bahrain Shaikh Hamad bin Isa Al Khalifa and other leaders. "I would also take the opportunity to interact with the Indian diaspora.

I will be blessed to be present at the formal beginning of the re-development of the temple of Shreenathji - the oldest in the Gulf region – in the wake of the auspicious festival of Janmashtami. I am confident that this visit would further deepen our relationship across the sectors," Modi said.