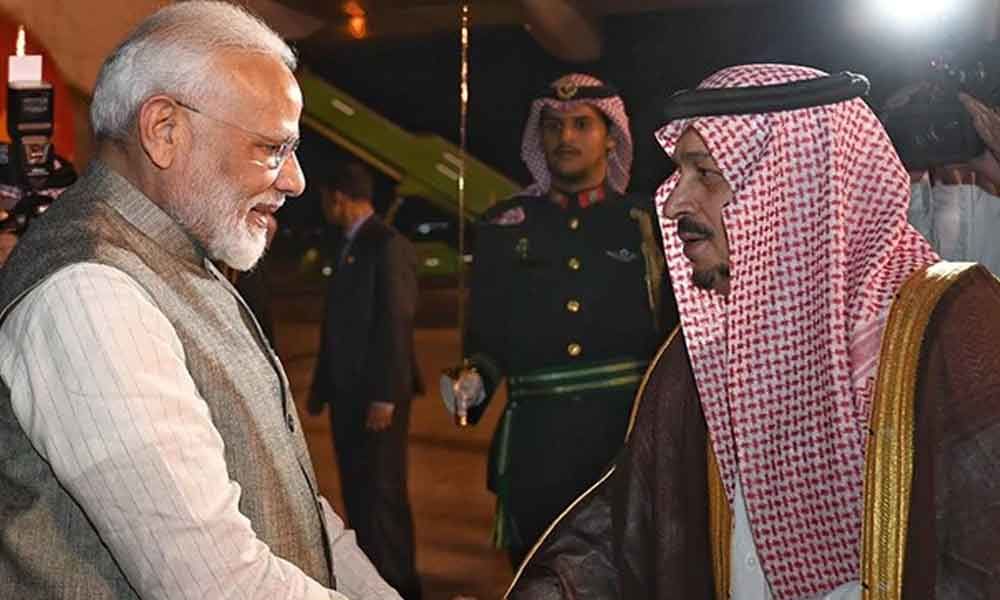 'Landed in the Kingdom of Saudi Arabia, marking the start of an important visit aimed at strengthening ties with a valued friend. Will be taking part...

RIYADH: Prime Minister Narendra Modi arrived in Riyadh late on Monday night on a two-day visit, during which he will attend the third edition of Saudi Arabia's high-profile annual financial conference and hold bilateral talks with top leadership of the Gulf Kingdom.

"Landed in the Kingdom of Saudi Arabia, marking the start of an important visit aimed at strengthening ties with a valued friend. Will be taking part in a wide range of programmes during this visit," the prime minister tweeted.

He will deliver the keynote address under the title ''What's next for India?'' at the Future Investment Initiative (FII), which is dubbed as ''Davos in the Desert''.

Landed in the Kingdom of Saudi Arabia, marking the start of an important visit aimed at strengthening ties with a valued friend. Will be taking part in a wide range of programmes during this visit. pic.twitter.com/3MskcllePr

Besides addressing the forum, he will hold bilateral talks with Saudi King Salman bin Abdulaziz and Crown Prince Mohammed bin Salman. The two sides are expected to sign a number of agreements in several key sectors including oil and gas, renewable energy and civil aviation to bolster their ties.

The three-day forum, beginning on Tuesday, will host financiers, governments, and industry leaders who would discuss global trade and explore the trends, opportunities and challenges shaping the global investment landscape over the coming decades.

"India and Saudi Arabia have enjoyed traditionally close and friendly relations. Saudi Arabia has been one of the largest and reliable suppliers of India's energy needs," PM Modi said in his departure statement in New Delhi.

He noted that defence, security, trade, culture, education and people-to-people contacts are the other important areas of bilateral cooperation with Saudi Arabia.

The two sides would also sign an agreement to establish a Strategic Partnership Council to coordinate on key issues. The council will be headed by Prime Minister Modi and the crown prince and it will meet every two years.

This would be Prime Minister Modi's second visit to the Gulf Kingdom. During his first visit in 2016, King Salman conferred Saudi's highest civilian award on him. The Crown Prince visited India in February 2019, giving a further fillip to the bilateral ties.

Saudi Arabia last month said that it was looking at investing USD 100 billion in India in areas of energy, refining, petrochemicals, infrastructure, agriculture, minerals and mining.

At the FII forum, Prime Minister Modi will speak on India's economy, its challenges and opportunities for equitable growth and prosperity.

"I will speak about the growing trade and investment opportunities for the global investors in India as the country marches forward to a 5 trillion dollar economy by 2024," PM Modi said.

The high-profile forum faced widespread boycott in 2018 in the aftermath of the killing of Saudi dissident journalist Jamal Khashoggi, who was murdered in the Kingdom's consulate in Istanbul, Turkey by Saudi security agents.