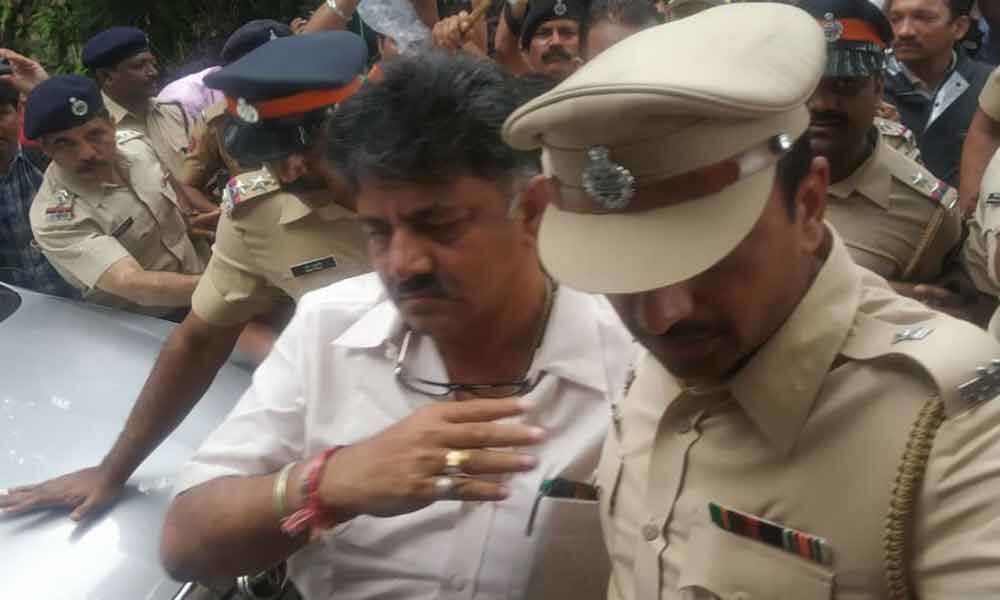 Normal life was hit in parts of Karnataka's Ramanagara district Thursday following a bandh or shutdown called to protest the arrest of senior Karnataka Congress leader D K Shivakumar by the Enforcement Directorate in a money laundering case.

Bengaluru: Normal life was hit in parts of Karnataka's Ramanagara district Thursday following a bandh or shutdown called to protest the arrest of senior Karnataka Congress leader D K Shivakumar by the Enforcement Directorate in a money laundering case.

Sporadic protests were reported in various places, including Channapattanna and Ramanagara, since morning, while schools and colleges remained shut in the district, under which D K Shivakumar's assembly segment Kanakapura is located, the police said.

Shops and business establishments by and large were closed in response to the bandh or shutdown called by the local unit of the Congress and supported by its alliance partner in the previous coalition government -- the Janata Dal (Secular) or JD(S).

Supporters of the bandh or shutdown staged demonstrations and attempted to block roads at some places, but were dispersed by police as the protests continued for the third day.

With no buses plying in Kanakapura, office goers were seen stranded while in other parts of the district some vehicular movement was seen during the early hours. Police said they have made elaborate security arrangements across the district to avoid any untoward incident.

A Delhi court on Wednesday evening had remanded D K Shivakumar, who was arrested by the Enforcement Directorate in Delhi on Tuesday, to the agency's custody till September 13.

The Congress, which has dubbed the action by the Enforcement Directorate as "political vendetta", had staged protests in several parts of Karnataka on Tuesday night and on Wednesday against the arrest of Shivakumar, a key troubleshooter of the party, in connection with alleged tax evasion and hawala transactions worth crores.

Quoting reports he received, state Home Minister Basavaraj Bommai had on Wednesday said five to six buses were pelted with stones and attempts made to torch one bus each in Kanakapura and Bengaluru.