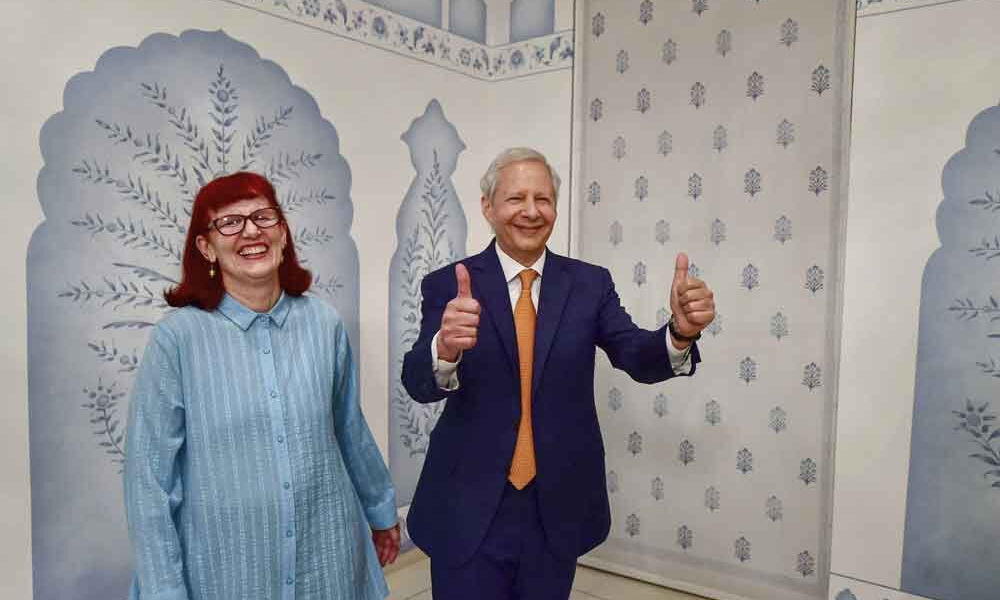 When US Ambassador Kenneth I. Juster no longer saw the radiant blue Indian-style murals in his official residence, the Roosevelt House that he had seen during his 2001 visit to India, he commissioned the works of art again

New Delhi: When US Ambassador Kenneth I. Juster no longer saw the radiant blue Indian-style murals in his official residence, the Roosevelt House that he had seen during his 2001 visit to India, he commissioned the works of art again.

Unveiled on Thursday, the Blue Room at the Roosevelt House now shows recreated works by American artist Karen Lukas, who had initially done them in 1995 at the invitation of then Ambassador Frank Wisner and his wife Christine de Ganay.

"When I first visited Roosevelt House in 2001, I remember vividly the murals in this dining room and how beautiful they were," Juster, who had then been Under Secretary in the US Commerce Department, said.

The story of the first painting -- and removal -- of the Indian murals started in 1995 when Lukas suggested a way to honour India's artistic excellence to then ambassador's wife.

Completely taken by the amazing arts and crafts and having visited villages where courtyards and walls were painted with the most beautiful traditional designs, Lukas set to paint the Rajasthan-inspired designs over the course of several months in 1995.

It was not known when and why they had been removed. "When I came here as Ambassador in 2017, I was disappointed to see that the murals had been plastered over and the walls were bare white," Juster said, adding that he tried locating the artist who had originally done them.

Lukas says that Ambassador Juster understood the respectful message of her painting and wanted to "recreate that beautiful space". Unfortunately, she had destroyed her original stencils, but she was able to recreate her design and work with a design company in New York named EverGreene.

The Blue Room, which serves as the dining hall, supplements the historical section that shows photographs of different points in the US-India relationship in the House's main hallway.

"Then, in the public living room and library, we have American artists on display. Then I thought it made sense in the dining room to restore the Indian art displayed in the murals," the US envoy said.

Roosevelt House, designed by architect Edward Durell Stone with a vision that fused US and Indian architectural influences, now boasts of a room full of blue Indian motifs.

The restoration was supported by the American Chamber of Commerce in India, the US-India Strategic Partnership Forum, and the US-India Business Council and co-ordinated by the Fund to Conserve US Diplomatic Treasures Abroad, a public-private partnership with the US Department of State and its Office of Cultural Heritage.