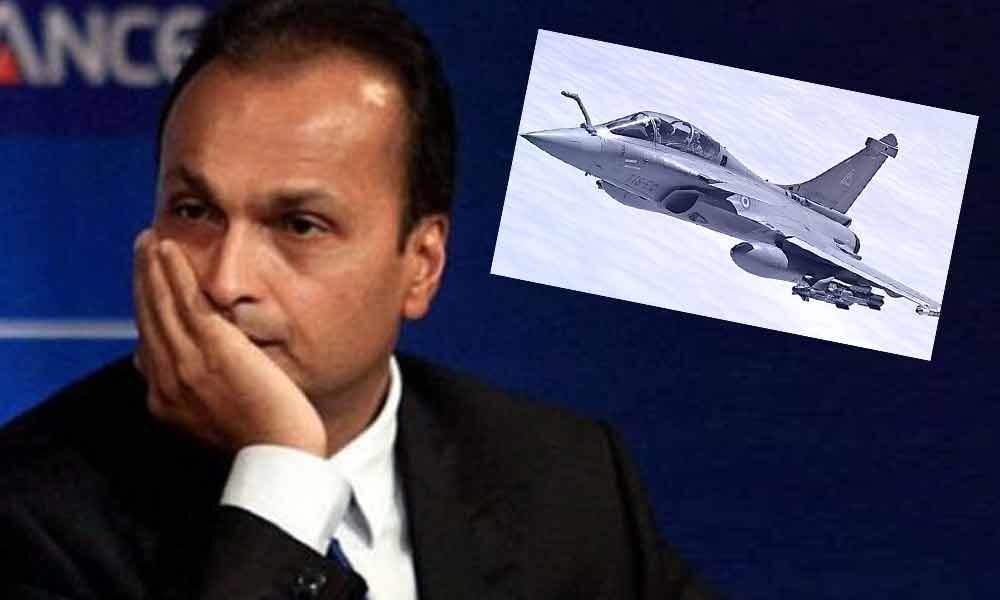 In a sensational disclosure, top French daily Le Monde in a report said the French government had waived dues of over 140 million euros owed by Anil Ambani’s French firm at the time the deal for 36 Rafale jets was being negotiated in 2015.

New Delhi: In a sensational disclosure, top French daily Le Monde in a report said the French government had waived dues of over 140 million euros owed by Anil Ambani's French firm at the time the deal for 36 Rafale jets was being negotiated in 2015.

The author of the report Julien Bouissou, South Asia correspondent of Le Monde, tweeted that "between February and October 2015, while the French were negotiating the Rafale contract with India, Anil Ambani, a close friend of Prime Minister Narendra Modi, enjoyed a tax waiver of 143.7 million euros (Rs 1,125 crore) from the French state. Quite a cozy deal, right?"

Coincidentally, it was on April 10, 2015 that Modi had announced the deal for buying 36 Rafale aircraft from France during an official visit to Paris. Soon after the announcement, Anil Ambani's Reliance Defence had emerged as the lead offset partner for the deal. The total offsets for the deal worth 7.87 bn euro to be discharged in India were valued at Rs 30,000 crore.

In late April 2015, a few days after Modi's announcement, Anil Ambani firm Reliance Aerostructures Limited formed a joint venture with Dassault. The production unit of the joint venture, called Dassault Reliance Aviation Limited was inaugurated in Nagpur in 2016 in the presence of top Indian and French ministers.

Days before the MoU was signed in Delhi, another of Ambani's firms, Reliance Entertainment had invested in a French film produced by the then French President Francois Hollande's partner, Julie Gayet.

Hollande had subsequently denied any connection with the deal but told AFP that giving offsets to Ambani was part of a 'new formula' for buying 36 Rafale aircraft which was put forth after the BJP government assumed power in May 2014. The government has denied these charges.

Giving details of the case, Le Monde also reported that in early 2015, the French auditor firm AEG France had refused to certify Reliance Flag Atlantic France's accounts as it was not sure if they were "straightforward and accurate," according to French rules.

Mumbai: The Reliance Communications on Saturday rubbished a media report which claimed that taxes to the tune of 143.7 million euro were waived by the French authorities for a France-based company of Anil Ambani "just a few months" after PM Modi announced the decision to buy 36 Rafale fighters in 2015.

In a statement, the Reliance Communications clarified that the tax issue of its subsidiary Reliance FLAG Atlantic France SAS pertained to 2008 and had been settled as per the local laws, much before the Indian government decided to purchase Rafale jets from French company Dassault.

"Reliance Flag says the tax demands were completely unsustainable and illegal. Reliance denies any favouritism or gain from settlement," it added.

New Delhi: Firing a fresh salvo against Prime Minister Narendra Modi on Rafale issue, the Congress has alleged that the reported tax waiver by France to Anil Ambani's company was due to "blessings" of Modi who had acted as a "middleman" for the businessman.

How many other companies in France have got a tax benefit? Is this not a quid pro quo for the purchase of aircraft? It is clear that only one watchman is the thief," Surjewala said.

New Delhi: Reacting to a French media report that Anil Ambani's firm received a tax waiver from France within months of the Rafale deal announcement, the Ministry of Defence said there is no connection between the tax issue and the fighter jet deal.

"We have seen reports drawing conjectural connection between tax exemption to a private company and procurement of Rafale jets by India. Neither the period of tax concession nor subject matter of concession relate to Rafale procurement," said a statement by the ministry.

Dismissing any link between the Rafale deal and the "tax exemption" to Ambani's firm, the ministry said, " ... connections drawn between the tax issue and the Rafale matter are totally inaccurate, tendentious and is a mischievous attempt to disinform (sic)."