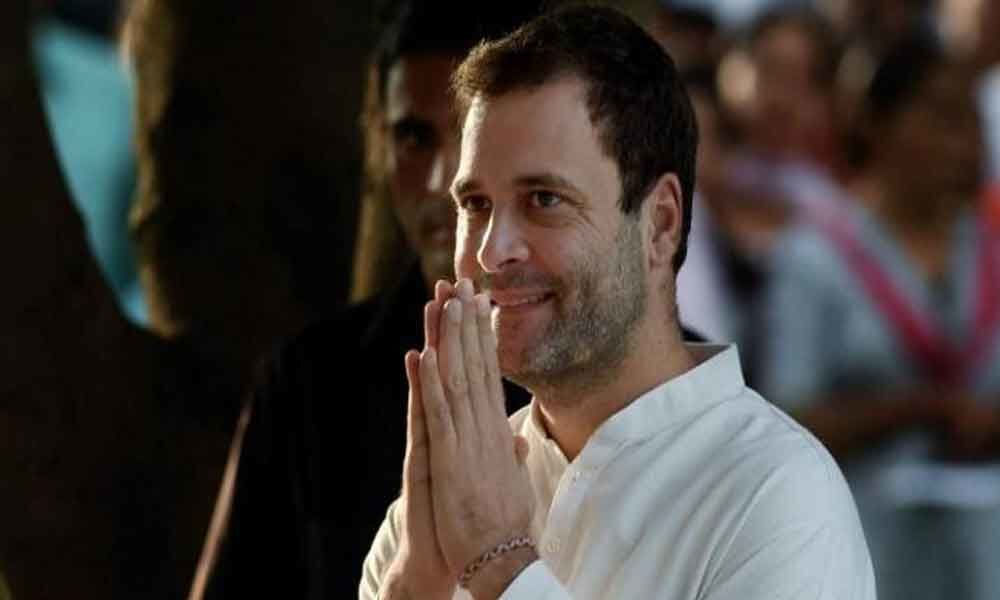 The Congress chief is lagging behind BJP's Smriti Irani in Amethi, according to the Election Commission.

Kalpetta: Rahul Gandhi is heading for a record-breaking margin against his nearest rival CPIs P P Suneer in the Wayanad Lok Sabha constituency on Thursday, as roads in front of counting centres in this hill town wore a deserted look.

As counting progressed, Gandhi established a lead of over three lakh votes, probably the biggest margin in the Lok Sabha elections in the State.

Local leaders assembled at the DCC office and burst crackers in anticipation of the big win and shouted slogans congratulating the congress chief.

However, there was a palpable sense of disappointment with the Congress-led UPA's poor show in other States with senior leaders trailing according to the latest trends.

Gandhi is contesting a second seat from the Wayanad Lok Sabha constituency nestled in the Western Ghats, besides his traditional bastion of Amethi.

The Congress chief is lagging behind BJP's Smriti Irani in Amethi, according to the Election Commission.

As Gandhi crossed a record-breaking three lakh margin, the biggest for any candidate in Lok Sabha polls in Kerala, Congress workers took out a procession from the DCC Office Rajiv Bhavan to SKMJ High Schoolthe counting Centre.

A few of them marched to Kalpetta town holding Congress flag.

A separate group of workers of Indian Union Muslim League were seen traveling on two-wheelers waving their green flags.

A large number of Muslim League flags seen in a Rahul Gandhi roadshow after he filed his nomination from Wayanad seat had created a row with BJP president Amit Shah reportedly likening Wayanad to Pakistan. Congress workers said they were happy that they could ensure a resounding victory for Gandhi but expressed disappointment over the dismal show of the party in other parts of the country. "You are seeing a Rahul wave across Kerala," AICC member and former Kerala minister P K Jayalakshmisaid as the counting progressed.

Congress-led UDF is leading in most of the 20 constituencies in the State. Expressing disappointment over the poor show of the Congress-led UPA in other states, former-MLA and Congress leader K C Rosakutty Teacher alleged that the BJP-led NDA gained by manipulating all institutions including the Election Commission of India. DCC general secretary G Vijayamma Teacher said the party workers worked very hard in seven Assembly segments three each in Wayanad and Malappuram districts and one Kozhikode district, to ensure a record-breaking win for Gandhi. She said Wayanad is now a 'VVIP constituency' and the Congress chief will ensure its all round development.