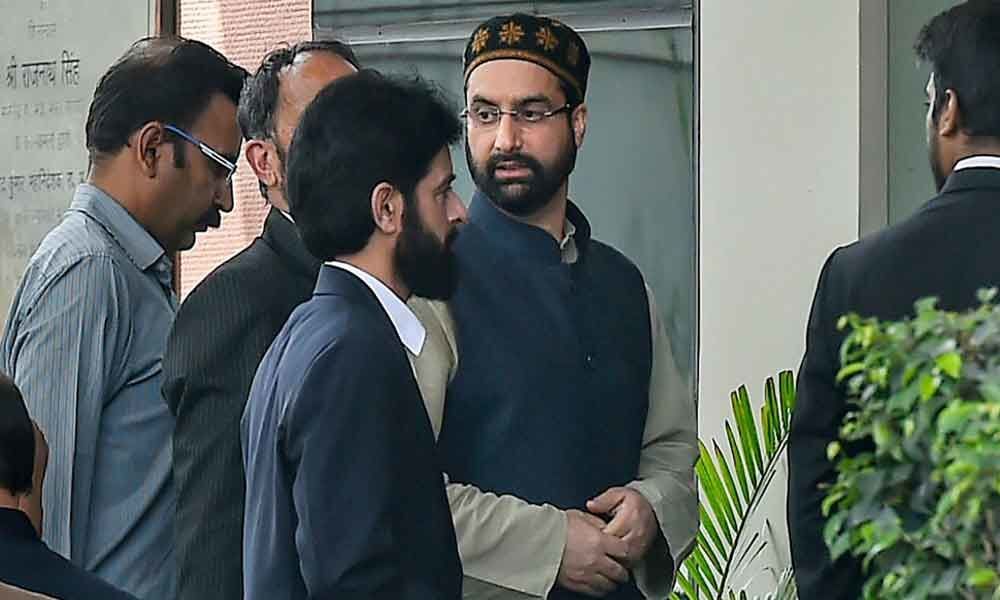 Separatist leader Mirwaiz Umer Farooq Tuesday appeared before the National Investigation Agency for the second consecutive day for questioning in connection with a case related to funding of terror groups and separatist organisations in Jammu and Kashmir, officials said here.

New Delhi: Separatist leader Mirwaiz Umer Farooq Tuesday appeared before the National Investigation Agency for the second consecutive day for questioning in connection with a case related to funding of terror groups and separatist organisations in Jammu and Kashmir, officials said here.

The Mirwaiz came to the NIA headquarters under police protection and will be questioned on the matter of funding of his own party -- Awami Action Committee -- and Hurriyat Conference, a conglomerate of several separatist organisations, the officials said.

The Mirwaiz is the chairman of the Hurriyat Conference which has in the past engaged with the NDA and UPA-led governments for talks to find a lasting solution to the Kashmir issue.

The NIA has also summoned Naseem Geelani, son of pro-Pakistan separatist Syed Ali Shah Geelani, on Tuesday but it was not immediately clear whether he was appearing before the agency or not.

The NIA probe seeks to identify the chain of players behind the financing of terrorist activities, pelting of stones on security forces, burning down of schools and damaging of government establishments.

The case names Hafiz Saeed, the Pakistan-based chief of Jamaat-ud-Dawah (JuD), the front for the banned Lashker-e-Taiba, as an accused. It also names organisations such as Hurriyat Conference factions led by Syed Ali Shah Geelani and the Mirwaiz, the Hizbul Mujahideen and the Dukhtaran-e-Millat.

Ahead of his appearance before the NIA, the Hurriyat Conference chairman tweeted, "In Delhi today with my colleagues for the NIA summon, efforts to malign leadership for its political stand won't work. Inspite of harassment Hurriyat will continue to seek peaceful resolution of the Kashmir issue. Urge people back home to stay calm and peaceful."

The NIA had on February 26 carried out searches at premises of several leaders, including the Mirwaiz.

The probe agency questioned two maternal uncles of the Mirwaiz, Maulvi Manzoor and Maulvi Shafat, and his close aides last year. Both Manzoor and Shafat are retired senior government officers.

The Mirwaiz had informed the NIA that he was not acquainted with the subject matter of the FIR referred to in its notice and also added that the notice appears to have been issued on the basis of "fallacious assumptions and misinformation solely aimed at maligning" him.