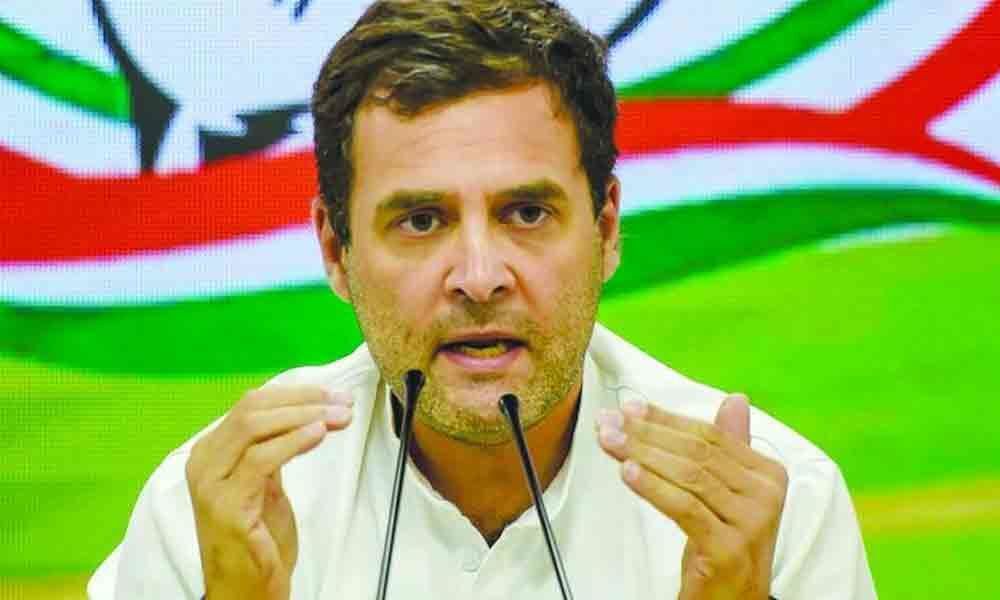 He also exhorted people to ask Prime Minister Narendra Modi what he got in return for benefiting Anil Ambani with Rs 30,000 crore.

Amethi: Raking up his often-repeated poll theme of alleged corruption in the Rafale deal, Congress president Rahul Gandhi Monday exhorted people to ask Prime Minister Narendra Modi what he got in return for benefiting Anil Ambani with Rs 30,000 crore in the fighter jet deal.

Mocking at the prime minister's "main bhi chowkidaar campaign" he said, "When his (Modi's) theft was caught in the Rafale deal, he says 'hum sab chowkidar hain." Addressing an election rally in his parliamentary constituency here, Rahul said,

"When the prime minister comes and makes false claims, just ask him why he gave Rs 30,000 crores to Ambani and what Ambani did for him in return."

Addressing the rally in Tiloi area here, Rahul Gandhi said, "Soon after the Congress comes to power after the Lok Sabha elections, an inquiry would be instituted in the Rafale deal and the truth will be before everyone."

"What the former former (French) President Francois Hollande said and what is in the French defence files will come out. Only two persons' names will come out - first Anil Ambani and second Narendra Modi," he said.

He asked the audience if anyone has seen a "chowkidar" before the house of a farmer or a labourer, Gandhi said for some time now, every farmer has been forced to do 'chowkidari' of his agriculture field.

In Amethi, Rahul Gandhi is pitted against Union Minister Smriti Irani, who, in a rally in the constituency on Sunday, urged voters to bid farewell to their "missing MP" in this election.

The voting for Amethi is scheduled to be held on May 6 in the fifth phase of elections. Dwelling on the Congress poll promise of NYAY - the Nyuntam Aay Yojna or the minimum income scheme which envisages a grant of Rs 6,000 a month to 20 percent of the poorest people in the country, he said there was a thinking behind it.

"Prime Minister imposed Gabbar Singh Tax (GST) and the money that was taken from your pocket went to those thieves abroad. The moment money went out of your pocket, you stopped purchasing and the factories closed down leading to unemployment," he said.

"Twenty-seven thousand youths lose their jobs every 24 hours," he claimed, adding "this is the work of the chowkidar". Talking of the Congress' promise to create employment opportunities in the country, if voted to power, Rahul Gandhi, went on to say that after 2019, 33 per cent women will be seen in the legislature and also in government jobs.

He made the statement apparently in passing without making any specific promise to bring in the Women Reservation Bill in parliament, if voted to power, to reserve 33 percent of legislatures' seats for women.

He also promised to make recruitment on 22 lakh vacant posts in government, adding that 10 lakh youths will get jobs in Panchayats. Recalling his family ties with Amethi, he said on coming to power, the Congress will see to it that all the people harassed here in the past five years are compensated.

Addressing another election meeting in Barabanki earlier he said on coming to power, the Congress will take "historic decisions for farmers" and bring out a separate budget for them.

Campaigning for party candidate Tanuj Punia, he alleged Modi has run a government which "helped just 15 people" in the past five years and took a sudden decision on demonetisation and made the entire country stand in queues.